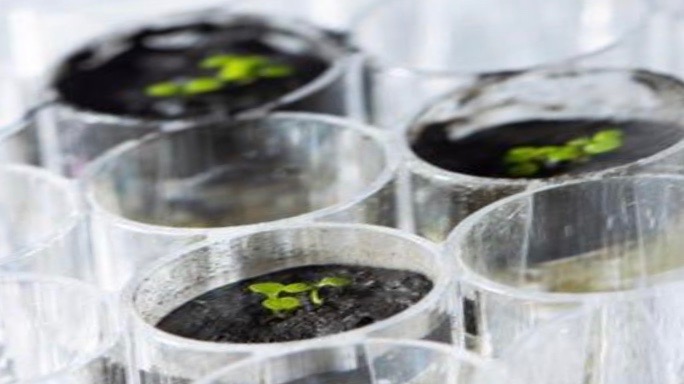 The discovery could herald a bit to grow plants on the surface of moon, at least, during lunar exploration missions. Lunar environmental conditions are quite different and how the environment on Moon would impact plant growth is not known yet. Nevertheless, this is being seen as a great scientific achievement.

Expressing astonishment over the findings, Robert Ferl, one of the corresponding authors of the research paper and a professor at the University of Florida’s Institute of Food and Agricultural Sciences, exclaimed, “Holy cow! Plants actually grow in lunar stuff. Are you kidding me?”

After much persuasion, Ferl and his colleagues obtained only 12 gm of lunar soil from NASA. With the tiny amount of soil, they carried out a small but carefully designed experiment. Ferl said, “For future, longer space missions, we may use the Moon as a hub or launching pad. It makes sense that we would want to use the soil, which is already there, to grow plants,” he said. “So, what happens when you grow plants in lunar soil, something that is totally outside of a plant’s evolutionary experience? What would plants do in a lunar greenhouse? Could we have lunar farmers?”

The team used thimble-sized wells in plastic plates, which are normally used to culture cells in the lab. Each of the small wells mimicked a pot and contained one gram of lunar soil. The soil in the pots was moistened with solutions containing nutrients necessary for plant growth. Then a small number of seeds of the Arabidopsis plant were added.

Arabidopsis plants are widely used in plant science research as their genetic codes have been deciphered completely. The choice of using Arabidopsis was made owing to the possibility of knowing how the plants behave in the different conditions of lunar soil. The scientists believed that the impact of the soil on plant growth, even to the level of gene expressions, would be easier to understand by the choice of plant.

In order to compare the plant’s growth, the scientists also used control groups which are basically non-lunar soil, like the JSC-1A, which is a terrestrial substance mimicking the lunar soil, simulated Martian soil and terrestrial soils from extreme environments. To their amazement, nearly all of the seeds sprouted.

As time passed, the scientists observed that there were differences in the growth of the plants and the control groups. Some of the plants were small, grew slowly and had a varied size in comparison to the others.

Anna-Lisa Paul, the lead author of the study and belonging to the Interdisciplinary Centre for Biotechnology Research and Horticulture Sciences Department, University of Florida, explained, “These were all physical signs that the plants were working to cope with the chemical and structural make-up of the Moon’s soil. This was further confirmed when the researchers analyzed the plants’ gene expression patterns.”

Paul further said, “At the genetic level, the plants were pulling out the tools typically used to cope with stressors, such as salt and metals or oxidative stress. So, we can infer that the plants perceive the lunar soil environment as stressful,” Paul said. “Ultimately, we would like to use the gene expression data to help address how we can ameliorate the stress responses to the level where plants—particularly crops—are able to grow in lunar soil with very little impact on their health.”

The scientists also believe that how the plants reacted is also dependent on the location from where the soils were collected. They found that the plants that manifested the most signs of stress were those grown on mature lunar soils, which are exposed to more cosmic wind and thus altered their make-up. On the other hand, the researchers found that plants that were grown on less mature lunar soils grew better.

Future studies address several other questions like how plantation changes lunar soils and how minerals in the extremely dry soil would respond to added water and nutrients.