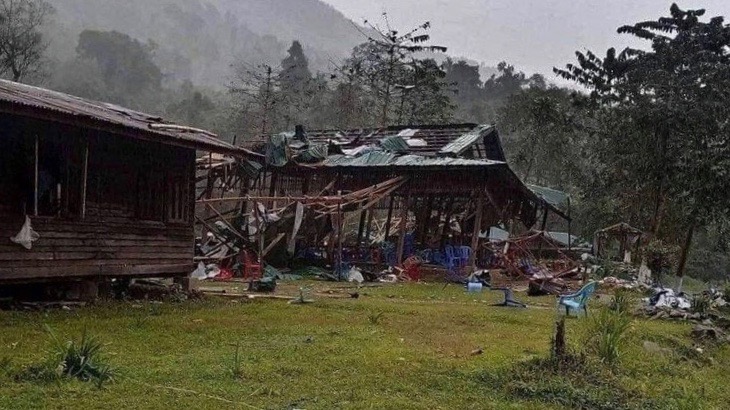 The death toll in the deadly military airstrikes in northern Myanmar’s Kachin State has reached 80, with dozens of people injured. On Monday, October 24, three military jets attacked a celebration organized on the 62nd anniversary of the founding of the Kachin Independence Organization (KIO), an ethnic rebel group, at Aung Bar Lay village in Hpakant township, a remote mountainous area 950 kilometers north of Yangon. Nearly 1,000 people were present at the gathering.

THREAD: 1 of #Myanmar's most powerful #ethnic army #Kachin Independence Army #KIA/political wing #KIO has refuted #Myanmar #military's claim that their air strikes were aimed at a KIA base camp. KIA said the attacked site was a marketplace with civilians. #WhatsHappeningInMyanmar https://t.co/5HABBG9sBr pic.twitter.com/Asoxr4KxZG

The military aircrafts reportedly dropped four bombs. Footage of the aftermath of the airstrikes shows damaged structures leveled to the ground with debris lying around. Myanmar Now quoted eyewitnesses saying that there was no fighting in the area at the time of attack. Kachin News Group reported that dozens of wounded persons were barred by junta forces from reaching nearby hospitals.

“Singers, artists and other civilians are among those reported killed in last night’s air strikes. We fear this attack is part of a pattern of unlawful aerial attacks by the military which have killed and injured civilians in areas controlled by armed groups,” stated Amnesty. The airstrikes were also condemned by the United Nations.

Since the military toppled the civilian government in Myanmar in February 2021, the junta forces have committed widespread atrocities including unlawful killings, forcibly displacing civilians, arbitrary detentions, and torture.

“The military has shown ruthless disregard for civilian lives in its escalating campaign against opponents. It is difficult to believe the military did not know of a significant civilian presence at the site of this attack,” Amnesty added.

The KIO has been fighting for greater autonomy for the Kachin people for the past six decades. The group explicitly opposed military rule following last year’s coup.

The airstrikes come days before the foreign ministers of ASEAN (Association of Southeast Asian Nations) states are scheduled to meet to discuss the crisis in Myanmar.

Earlier, on September 16, 11 children were killed in a similar military airstrike that targeted a school in Sagaing.

According to the Assistance Association of Political Prisoners, over 2,388 people have been killed in Myanmar for opposing the military rule’s and over 15,947 arrested so far.