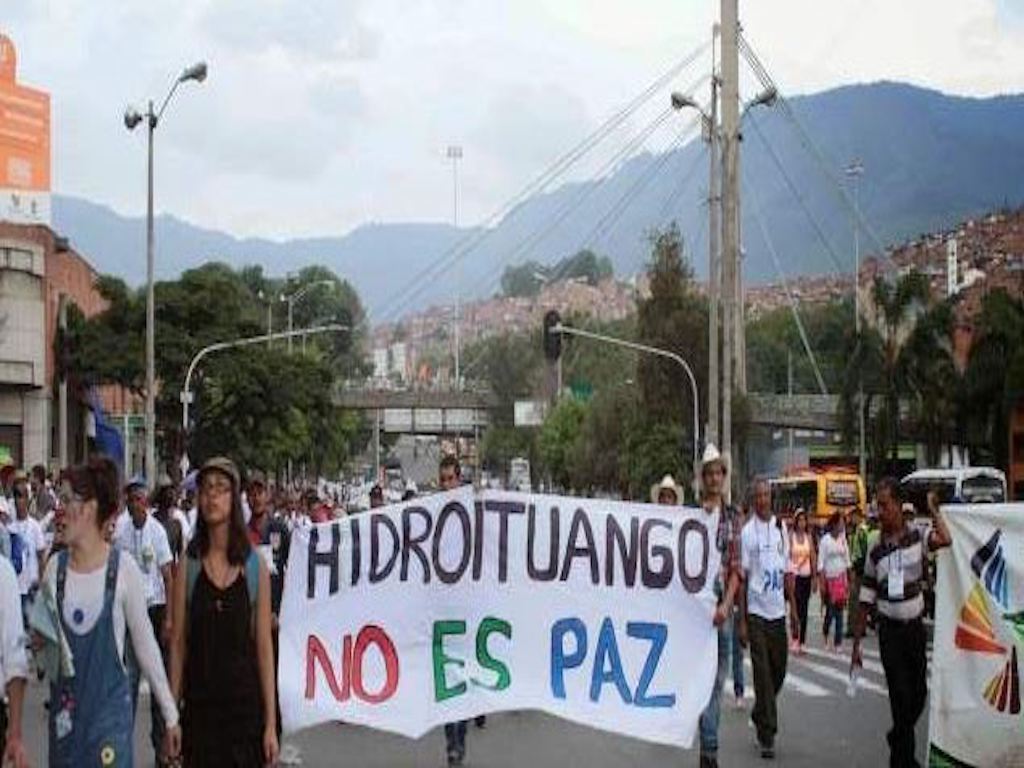 The Hidroituango hydroelectric dam project on the Cauca river in the northwest of Antioquia is the largest infrastructure project ever built in Colombia, and is projected to be one of the most profitable. This is probably why the local and national governments and Empresas Públicas de Medellín (EPM) – the company in charge of the project – have ignored the widespread rejection of the project by the local community, as well as national and international environmental and human rights organizations.

On April 28, a tunnel that is supposed to divert the river became clogged, leading to massive flooding. These floods forced the evacuation of at least 600 people and destroyed bridges and houses, and are merely a sign of what is to come.

The Hidroituango project was conceived in the late 1990s, but construction began only in 2010. Work was completed this year and all that remains to be done is the flooding of 4,500 hectares across 70 kilometers. This process is scheduled to start in July. It is projected to affect at least 12 municipalities, which will leave thousands more without homes and will have a grave impact on the biodiversity of the region as many hectares of flora and fauna will be lost underwater. The company has already began to cut down trees in the 4,500 hectare area.

Communities are especially angry at the likelihood of their access to truth and justice being affected by the project. They say that the area proposed to be flooded is where the last remains of nearly 2,000 forcibly disappeared people are located. In the 1990s and 2000s, armed groups used to assassinate people by pushing them off the mountains into the river. The bodies of those assassinated by these groups were also subjected to similar treatment. Human rights groups report that in the region, there were more than 60 massacres in the 1990s and 2000s whose details have still not been uncovered. If these bodies are washed away in the flooding process, the family members of the victims will lose their only hope at identifying their loved ones and having some truth and peace, the communities say.

Communities have also raised concerns over the impact of the project on their livelihoods and economic survival. Many will not only be physically forced out of their homes and communities, but will also be impeded from carrying out their traditional economic activities like fishing, small-scale farming and barequeo (a non-mechanical, natural form of gold mining using pans and sifting sand).

The opposition to the project has been fierce and sustained since the construction began in 2010. The movement Ríos Vivos (Rivers Alive) has been the primary organization involved in resisting the project and has engaged in diverse actions of lobbying the company and local governments to suspend the project, artistic and theatrical actions (as shown in the video below), mass mobilizations, and more.

Due to their opposition to the project, the movement has been under scrutiny and attack from right-wing forces. Several of their members have faced death threats from illegal armed forces in the region, as well as harassment from the Public Force.

On May 2, Hugo Albeiro Georgio Pérez, a social leader who is part of the Association of Victims and People Affected by Megaprojects and the Ríos Vivos movement and a father of 12 children, was assassinated in Puerto Valdivia – one of the areas whose residents were forced to evacuate in the latest flood. On May 8, Ríos Vivos said that Luis Alberto Torres, another member of the movement, was also assassinated in Puerto Valdivia while he was working in barequeo.

As the scheduled date to begin the flooding process nears, tensions continue to rise around the Hidroituango project. Ríos Vivos denounced the systematic failure of EPM to effectively respond to the victims of displacement, as many have been practically forced to fend for themselves. They also denounced that many do not even know where to go after the  evacuation. The floods and accidents related to the project continue to mount. The movement has urged the company to realize that the only way to avoid further problems is to let the river run free.