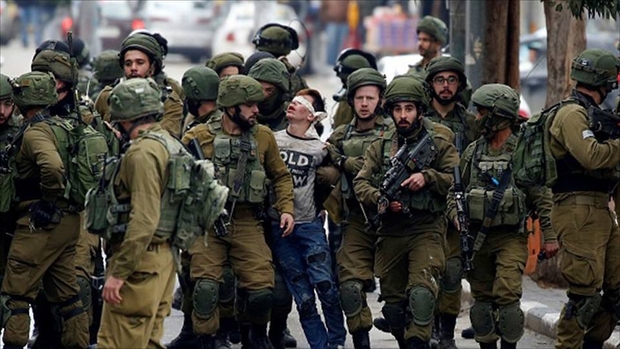 Every year, an average of 912 Palestinian children aged 12-17 are arrested by the Israeli military in the West Bank alone. Photo: Wisam Hashlamoun

Last week saw a huge outrage in the United States over children from migrant families being separated from their parents and held in establishments as part of Donald Trump’s ‘zero tolerance’ policy towards ‘illegal immigration.’ Massive protests and international outrage finally forced Trump to issue an executive order that ended the separation of children. Many sections of the liberal political establishment in the US expressed outrage at the cruelty inflicted on these children. At the same time, many of these sections are complicit, through their support of Israel, in far more severe crimes against children in Palestine, who are the victims of atrocities by Israeli soldiers.

Every year, an average of 912 Palestinian children aged 12-17 are arrested by the Israeli military in the West Bank alone, mostly from their homes at night, from where they are transferred to a detention centre, often on the metal floor of military vehicles – handcuffed and blindfolded – subjected to kicks, beatings and verbal abuse along the way.

On arrival at the detention centre, a majority of them are strip-searched, often in humiliating ways that violate the child’s dignity. A report by Military Court Watch (MCW), released on June 14, stated, “Some children report having to “crouch up and down naked” while being searched.. The military and prison authorities continue to disregard UNICEF’s recommendations”, which, among other things, stipulates that the search “should not involve the removal of all garments at the same time.”

It usually takes about 12 hours after the arrest for the interrogation to begin, in the course of which many children are left blindfolded and bound, in shipping containers or outside where they are exposed to extreme weather for long hours, in many cases without access to food or toilets.

“The types of reported abuse include: struck with the back of a gun; struck on the head with a torch; beaten with a baton; sat on; kicked; slapped; shot with a rubber bullet while on the ground; stepped on causing a fractured arm; punched; pushed off a bike; pushed into furniture; twisting a broken arm; pushed into a wall and barbed wire; handcuffs deliberately tightened; holding a stress position; and kicked in the genital.” according to the MCW report, based on testimonies of 114 children who were detained last year.

Apart from widespread use of physical violence, the use of threats during interrogation or detention to get confessions is a common practice reported by almost 60% of the arrested children, who were threatened with long-term detention if they did not confess, with solitary confinement, castration, denial of work permits etc. Many children were also threatened that their fathers would be arrested, their houses demolished, and their whole village ‘disciplined’.

72% of these Palestinian children were denied bail in 2015, which is the last year for which the relevant data is available. In contrast, no more than 18% of the Israeli children accused under the state’s juvenile justice system were denied bail that year.

Israel is not allowed to apply its civilian law in West Bank for doing so would amount to a formal unlawful annexation, and therefore, military law is technically applicable to the entire West Bank. However, in violation of this technicality, the Israelis living in the illegal settlements in West Bank are exempt from military law, which, in practice, is applied only to Palestinians.

Since the imposition of martial law by Israeli military in the occupied West Bank 51 years ago, which was the year from which Palestinian civilians have been subjected to prosecution by Israel’s military courts, a total of 46,512 children have been detained at different times by the Israeli military. In the month of April this year alone, up until when official data is available, 315 children from West Bank were under military detention. The monthly average of the number of Palestinian children from West Bank held under military detention by Israel this year, as on the end of April, when in the course of the Great Return March at least 15 children were killed by Israeli securities, is 332. These are not the children prosecuted for illegally migrating into another country, but the victims of an illegal occupation of their country by a foreign power.

Confessions under duress
The conviction rate, as of 2015, was as high as 95%. Official data is not yet available for the years that followed, but given the persisting trend of conviction based on no evidence except a confession obtained from the child under duress, the conviction rate is unlikely to have seen any significant decline.

In one such case early last year, a 16-year-old in the occupied West Bank, suspected of having thrown stones at an Israeli military vehicle, was reportedly hurled face-down to the ground, and beaten up by a number of Israeli security personnel before he was blindfolded and carried in a jeep to a detention facility with his hands and legs bound. There, at the detention centre, the child was beaten again by soldiers who demanded that he sing “Happy Birthday to You.”

The indictment filed against him by the military prosecutor read: “The accused.. on January 26, 2017, or near that date, threw an object, including a stone, at a moving vehicle with the aim of harming it or the person driving it, namely, on the aforementioned date, on Route 465, or in the nearby vicinity, the accused threw stones at a number of moving vehicles with the intention of harming them or a person traveling in them.”

“Route 465”, Haaretz pointed out, “is 38 kilometers (about 25 miles) long. The vagueness of “near” and “nearby” indicates that the prosecution did not have evidence about a time and place when the offense was committed, but did have a confession. And the confession was easy to obtain.”

After subjecting him to physical abuse, the investigating officer told him that he had thrown stones. “I said that wasn’t true. He said he wanted to release me, if only I would confess. So I believed him and confessed,” the child told Haaretz. It was only after this that the boy was allowed to meet his father and access a lawyer. Based on this ‘confession’, he was convicted.

The military judge offered to release him on January 29, on the condition that his mother paid a fine of 5,000 Shekels (about 1376 USD) – which is about the average GDP per capita of Palestine between 1994 and 2016. In the occupied territories of West Bank and Gaza, where a majority live on less than 2 US dollars a day, to afford this fine amount is beyond the ability of most families.

“Where would I have gotten the money? What do they want, for us to finance the occupation?,” the child’s mother yelled outside the courtroom. Finally, after a plea bargain between the military prosecutor and the child’s lawyer was accepted by the judge, the boy was sentenced for 31 days in prison, three months on probation and a fined 500 shekel.

97% of all the children thus arrested and detained in 2017-18 were living and arrested within 800 metres of Israeli settlements built in violation of multiple international laws.

One 15-year-old reported, “At the end of the second interrogation, the interrogator phoned a lawyer and allowed me to speak to him. The lawyer told me not to confess. I told him I had already confessed. Then he told me he would see me in the military court.”

Similarly, 82% of the children are not informed about their right to remain silent. The other 18% were mostly informed either after the interrogation and or half-way through. In many cases, children were made to speak to lawyer on phone for a few minutes, without the child being in a position to confirm that the person on the other line was actually a lawyer.

In at least one of the cases assessed by MCW, the child was made to believe that the ‘right to silence’ implied that the child ought not to interrupt the interrogating officer. Another child reported that he was told that he had the right to remain silent, and that remaining silent would be interpreted by the court as an admission of guilt.

While the interrogation itself is conducted in Arabic, the written record that is made available is generally in Hebrew. 75% of the children arrested last year were shown or made to sign documents written in Hebrew – a language understood by few Palestinians.

In case of 71% of the children arrested by soldiers last year, often from their homes at night – in many instances after breaking in through the front door – “no written notification of the reasons for arrest or place of detention were provided.” Among the 29% who received written notices, 60% reported that “the details relevant to that particular child were handwritten in Hebrew.”

“This is despite the military informing UNICEF in April 2013 that a standard form written in Arabic and Hebrew must be given to parents of children arrested at home in every case,” the report by MCW stated. It was five years ago that UNICEF – after conducting a review of the child detention practices by Israeli military following widespread allegations of ill-treatment of children – produced the report titled Children in Israeli Military Detention.

The numerous systematic violations documented in this report 5 years ago have been confirmed by various Palestinian and Israeli human rights organizations, and by state agencies including the US State Department’s annual report on human rights.

The UNICEF had made a number of recommendations in its report to alter the practices of child detention by the Israeli military in order to make it compliant with international laws. Since then, the percentage of the arrested children that have access to lawyers has increased, but from nil to a mere 20% in 2018.

The conclusion of UNICEF’s 2013 report that “the ill-treatment of children who come in contact with the military detention system appears to be widespread, systematic and institutionalized”, MCW’s 2018 report states, “is still valid in June 2018.