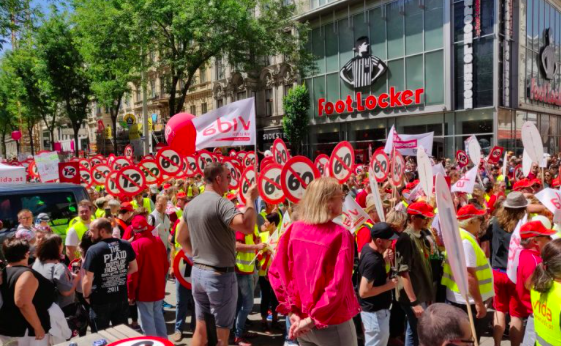 Tens of thousands of workers marched in Vienna on June 30 against a set of proposed ‘anti-worker’ labour laws. Photo: Reader.gr

Tens of thousands of workers marched in Vienna on June 30 against a set of proposed ‘anti-worker’ labour laws pushed forward by the far-right Austrian government. The new laws include the imposition of a 12-hour work day, and a resultant 60-hour work week. Though the government has said that the new rules are ‘voluntary’, the unions have pointed out that the new laws also remove the power of works’ councils to veto employers’ demands for extra hours.

The works’ council (Betriebsrat) are the enterprise-level representative bodies of employees in the country and the employer requires the agreement of these councils to implement policies.

“We will resist with all means at our disposal,” Wolfgang Katzian, president of the Austrian Trade Union Federation (ÖGB), announced to the crowd. Katzian urged the Austrian government to let voters decide on the 12-hour workday issue in a referendum.

Currently, Austria has an eight-hour workday and a 40-hour workweek. However, there is a provision in place allowing companies to have their employees work up to 10 hours a day and up to 50 hours a week.

The Saturday’s mass demonstration was first major workers’ action since Austrian Chancellor Sebastian Kurz  took office in late 2017 . The right-wing government, comprised of Kurz’s conservative People’s Party (ÖVP) and the far-right Freedom Party (FPÖ), argued that the changes to the labour laws were needed to give businesses more flexibility.

The government’s move seems to be towards diluting the works’ councils, which represents working class interests by ensuring workers’ voices are represented in matters related to the company. The country’s Labour Constitution Act requires the creation of a works’ council in enterprises with at least five employees and the council has the right of co-determination in matters related to multiple aspects of the enterprise. The council has the mandate to voice its opinion not only on the social and employment aspects but also on economic and financial matters of the enterprise.

According to the unions, the Kurz government had been pushing neoliberal and right-wing policies, which include ‘a reduction of tenants’ rights, racial segregation in schools, Islamophobic policies, and more “flexible” working hours’. The government has also been taking an anti-migrant stance and pushing for tighter border control in the European Union.

Kurz’s government earlier had to roll back certain provisions in their draft law after a heated debate broke out with the opposition over their attempt to deny the workers their legitimate right to refuse overtime work. In the proposed law, the government laid down reasons on the basis of which alone a worker could refuse to work overtime.  The government eventually backed down and said employees would be allowed to refuse to work overtime without giving a reason.

The draft law is expected to be passed by parliament on Thursday.