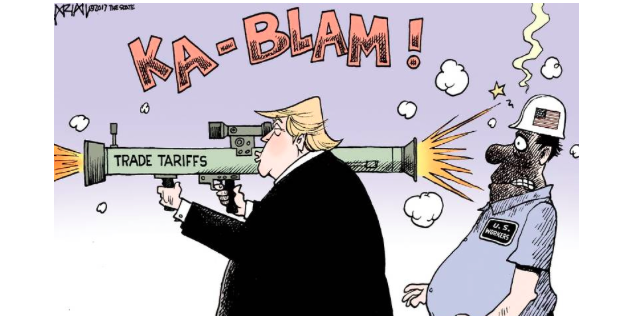 On July 6, the US imposed 25% tariffs targeting $34 billion of machinery, electronics and other components imported from China.

In a further escalation of the ongoing trade war between the US and China, the Trump administration is preparing to announce 10% tariffs on an additional $200 billion worth of Chinese exports to the US, including a variety of consumer goods. The full list of goods on which the tariffs will be imposed is likely to be released later this week or early next week.

On July 6, the US imposed 25% tariffs targeting $34 billion of machinery, electronics and other components imported from China. Trump had threatened to expand the tariffs to target $200 billion dollars of Chinese exports to the US if China retaliates. China, which is being targeted for not complying with Washington’s Intellectual Property Rights (IPR) regime which stands in the way of facilitating technology transfer to the country, did retaliate by imposing 25% duties on $34 billion of US imports into the country, including automobiles and agricultural commodities.

Tariffs may also be imposed on another $16 billion of Chinese goods after a public hearing later this month. China has refused to capitulate to the IPR regime and has promised to retaliate dollar-to dollar, imposing tariffs on $16 billion worth of US exports to the country, targeting coal and oil.

These tariffs will be a direct blow to Trump’s campaign promise of reviving the coal industry, which has been increasingly dependent on exports for its growth, with shipments to China increasing by almost 40% last year. For China, on the other hand, such tariffs on US coal are unlikely to have any significant negative impact, for among the 271 million tons of coal imported by the country last year, only 3.2 million tons were from the US – 1% of the total coal imports.

Even worse affected than the US coal industry, should China retaliate with tariffs, will be the country’s oil sector. Last year, China was the second largest importer of US crude. The third largest importer, the UK, bought less than half of what China did. Tariffs standing in the way of the second biggest oil market of the US will be a significant blow to its oil industry. Having diversified its sources of oil, China – the largest oil importer in the world – relied on the US for less than 2% of its oil imports last year. This allows the country to impose such tariffs on US oil without compromising its own energy requirements.

What started out as an ill-thought out attempt to “protect” US industry from what it regards as unfair trade practices on the part of China, is now set to blow up into a full-scale trade war, with the latest round of tariffs proposed by the US targeting consumer products including seafood, “tires, dog leashes, handbags, baseball gloves, furniture, apparel, mattresses, electric lamps and television cameras and well as components in telephones and flat panel displays,” the Wall Street Journal reported.

If these tariffs are put into effect after consultations with the industry scheduled on August 20-22, $450 billion Chinese exports to US will find tariffs standing in its way. Approximately $500 billion dollars was the total value of the Chinese goods imported by the US last year. Trump has threatened to target single every dollar of Chinese imports into the country.

Should China retaliate by imposing its own tariffs on US goods, as it has promised to, Trump’s ‘America first’ policy is bound to negatively impact the growth of numerous US industries, even if selected large companies benefit from lack of competition.

The effects of the trade war are already being felt by multiple businesses in the US. Maine Lobster, which is one of the biggest harvesters of lobsters in North America, had more than doubled its exports to China in the last two years. With its products selling cheaper than the higher quality Canadian lobsters, the company had a competitive edge in the price-sensitive Chinese market, to which it exported over $137 million worth of lobsters last year. This was a quarter of the total sales of the company.

However, with China’s retaliatory tariff of 25% on US seafood and agricultural products, which was imposed from July 6 over and above the 10-15% of tariffs that were already effective on US and Canadian lobsters, the company’s fortunes are set to change. Having borrowed $1.5 million to invest in the expansion of one of its facilities, the company now will have to not only struggle with these high tariffs, but also with its loss of competitive edge because China has, in the meantime, reduced the tariffs on Canadian lobsters to 7%, while US lobsters now face a total of 35-40% tariffs.

“I suspect that will virtually wipe out my company’s Chinese sales”, the CEO of Maine Coast Company, a subsidiary of Maine Lobster, told WSJ. “What happens if we lose 30%, 40%, even 50% of our market share? We have to keep paying the bank for that borrowed money. If we do have an impact in sales, it’s going to have a direct impact on jobs. That’s the only way we reduce our expenses. I hope that doesn’t happen. And to date we haven’t laid anyone off.”

If the trade war does not subside, the company might be forced to move some of its operations to Canada. “The losers here will be small family businesses and blue-collar workers. Maine Lobster wholesalers and processors employ around 4,000 people. Much of the work is highly physical, with workers grading and packing lobsters. Maine also licenses around 4,500 lobster fishermen..” WSJ reported last month.

Quite apart from retaliatory tariffs, the tariffs imposed by the US on aluminium imports are in itself taking a toll on numerous American industries. Pointing out that 60% of all the beer sold in the US is in cans, the CEO of Beer Institute told CNBC last month that the resulting increase in the price of US aluminium would impose an additional cost of $347 million on brewers. Industries involved in the beer supply chain might see a loss of 20,000 jobs, he warned.

One of the few remaining nail producers in the US, the Mid Continent Nail Corporation in the city of Poplar Bluff in Missouri, might go out of business soon as a result of the tariffs the US has imposed on steel imports, which have driven up prices. Having already lost half of its business in two weeks after the tariffs on steel took effect on June 1, the industry, which is one of the largest employers in Butler county, laid off 60 of its 500 employees last month, and might have to fire hundreds more by the end of this month.

The increase in the cost of steel as a result of the protection offered by these tariffs has also affected the locker-making industry, in which the price of steel accounts for around 45% of the production cost.

Lyon and Republic – which has the biggest market-share of US-made lockers, employing around 400 workers in Indiana and Illinois – has seen its cost of production rise to an extent where the company is now making a loss. Prior to the introduction of tariffs, the company spent around $34 on steel for the production of one individual locker unit, which is sold for $100. Now, after the tariffs, the company spends almost $ 41 on steel per unit, as a result of which it has gone from making $5 profit per unit to a loss of $1.78.

Trump’s reckless pursuit of what he calls the ‘America First’ policy is pushing this company to consider buying locker components made in China. Should Lyon and Republic choose to outsource locker parts from other countries in order to cut costs, at least a quarter of the workforce employed by it in the US will have to be laid off.