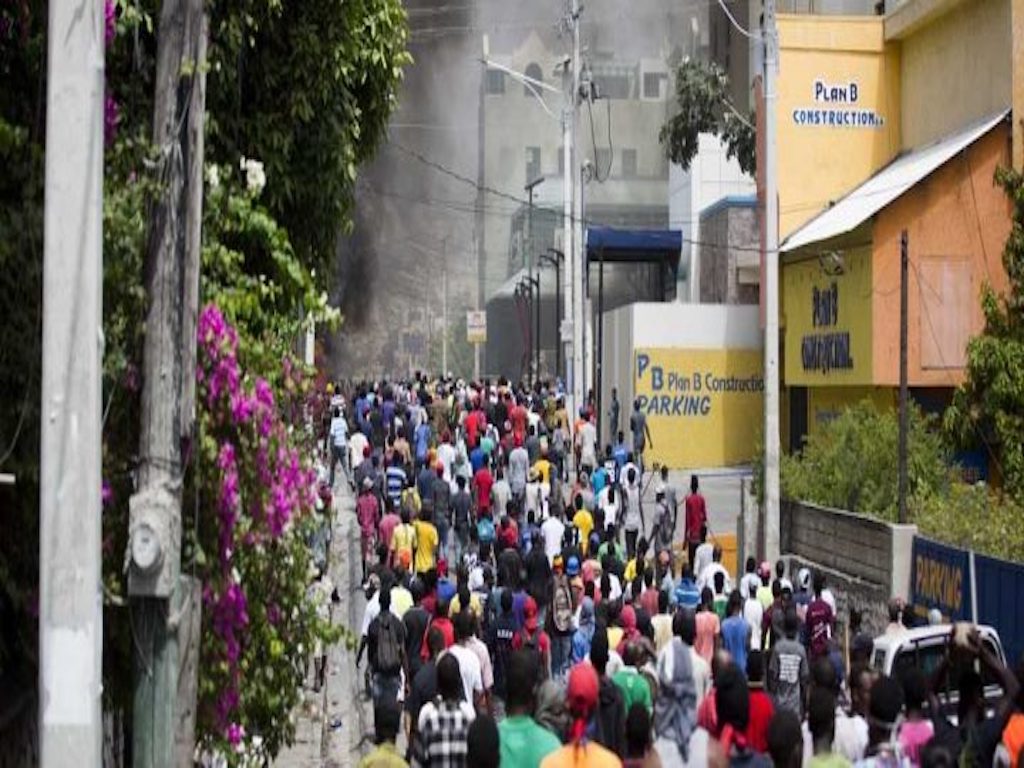 On July 14, Haitian prime minister Jacques Guy Lafontant announced his resignation following days of protests by unions and social movements after the government announced massive increases in fuel prices. The hike that was announced on July 6 would have seen the prices of gasoline, diesel and kerosine in the country rise by 38%, 47% and 51% respectively. The measure was part of an agreement with the International Monetary Fund (IMF) in exchange for aid and grants. Although the price rise was withdrawn the next day, the protests that had broken out did not cease.
On July 9 and 10, transport and public sector unions, rural and urban social movements took part in a major strike. This also has to be seen in the context of the social, economic and political crises in the country where countless coup d’etats, military occupation, systemic corruption, and other vile expressions of colonialism, imperialism, racism and neoliberal economic policies have made Haiti one of the poorest and most unequal countries in the world (not to mention the various natural disasters that have had a serious impact on the country).
As protests continued to rage, President Jovenel Moïse refused to step down despite pressure on him to do so, both from the people on the streets and within Congress.

Lafontant’s resignation was a direct result of the power of the people and the organized strength of unions and political and social organizations. However, Guerchang Bastia, a militant of the Pati Sosyalis Rasin Kan Pep La in Haiti, also noted that the resignation was a strategic move by the ruling class to demobilize the people’s struggle:
“It is almost a lie to the people, trying to say that when the prime minister resigns, the situation will change and this means you don’t need to struggle anymore. This is a very important means by which the ruling class seeks to thwart the strategy of the people. It makes it hard to mobilize the people. They say we need to wait a couple months or even a year; we need to give a chance to the new prime minister. And it’s always the same strategy! They change some minister, but not the project.”

“This has happened several times in Haiti, when the people are struggling against the bad situation in the country. They just change some minister or prime minister but it is still the same system. Nothing is really going to change. The neoliberal project of the state remains and they will continue following the orders of the IMF without trying to make changes to create a better life for the people. That is important to understand, but at the same time it [Ladontant’s resignation] is still a result of the struggle of the people. It can give people inspiration. It shows that we achieve things with our struggle, that we can impose our power on the prime minister, and make him resign. It is very significant for the left and the political tendencies fighting against the power of Lafontant and President Moïse. It means that when we are struggling, we can mobilize and fight for something, and it gives us inspiration.”

The IMF is just one of the institutions that have served to impose the policies of international capital on the island nation. After the coup d’etat in 2004 which overthrew the progressive Jean-Bertrand Aristide, Haiti’s first democratically elected president, the road was clear for the imposition of a neoliberal economic agenda. Due to the unrest in the country after the coup, the United Nations decreed the establishment of MINUSTAH, a peace-keeping mission led by the Brazilian army and composed of soldiers and civilians from diverse countries. The MINUSTAH, which was carrying out the military occupation of Haiti from 2004-2017, committed countless human rights violations, as well as violations of international humanitarian law, including mass rapes, contributing to the spread of cholera, which led to the deaths of hundreds of thousands of Haitians, extrajudicial executions and more.

Despite the extremely challenging situation in the country and adverse conditions, the Haitian people have continued to resist the militarization and neoliberal measures which aggravate the dire conditions of poverty and inequality. This latest popular uprising is part of the resistance movement which continues to grow.