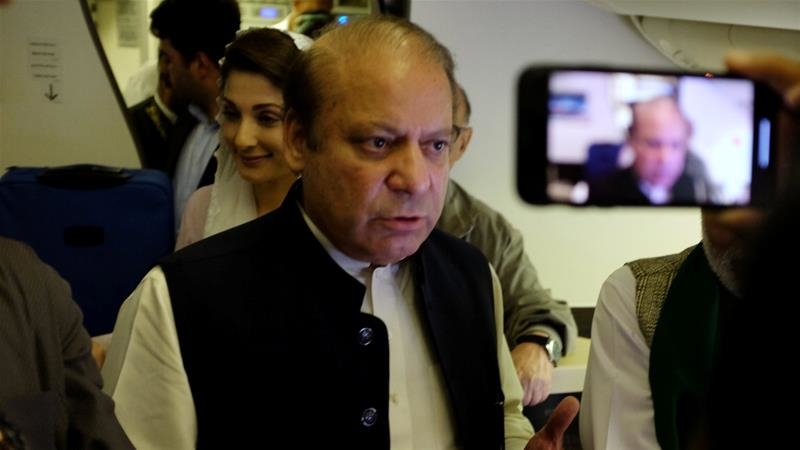 Nawaz Sharif has been sentenced to 10 years in prison.

The run-up to the elections in Pakistan on June 25 has been violence-filled and full of controversy, giving rise to great uncertainty over the future of the country. In the span of one week, three deadly attacks in Khyber Pakhtunkhwa and Balochistan led to the death of over 150 people and saw over 250 getting injured. The week also saw former Prime Minister Nawaz Sharif and his daughter Maryam being jailed after they were convicted, along with his son-in-law Safdar, on charges of corruption related to the ownership of four luxurious flats in London. In the aftermath of the conviction, the police opened criminal cases against 17,000 members of Sharif’s Pakistan Muslim League (Nawaz) (PML-N), which just completed a five year term in power. The impact of these developments on the elections remains uncertain for now.

Experts point to increasing signs of the military establishment working to seal the fate of the PML-N, even as newly formed religious fundamentalist parties gain in strength.

A number of PML-N candidates were earlier pressurized to leave the party. On July 1, seven candidates of the party from the Punjab province left it. It is probably as a response to such tendencies that Sharif returned from London to face imprisonment, with the hope that it would boost the prospects of his party in an election where former cricketer Imran Khan’s Pakistan Tahreek-e-Insaaf party is believed to be front-runner. “I am surrendering myself in order to set a foundation of democracy,” Safdar told a gathering at Liaquat Bagh in Rawalpindi before he was arrested on July 8.

Incidentally, the last time Nawaz Sharif made a dramatic return was in 2007, after close to a decade of exile in Saudi Arabia. He returned with the support of the Saudi establishment and was also backed by western powers. He was even able to return to power but the release of the Panama papers was the beginning of the end for him. Of course, many experts have pointed out the larger significance of the debate around corruption. As Taimur Rahman of the Pakistan Mazdoor Kisan Party points out, corruption is often a weapon used by various sections of the political elite against each other. The challenge before the Left United Front, whose constituents are contesting the election, is to convince the people of this nature of the political elite in Pakistan.

Meanwhile, ahead of Sharif’s arrest at Lahore airport, almost 600 party workers of PML-N were arrested and internet connectivity was shut down by the police. The army, however, rejected all accusations of pressurizing judges to act against Sharif or interfering in the current campaign despite widespread concern about the same. Army Major General Asif Ghafoor noted that the army’s only involvement would be deploying personnel at elections booths, which has happened before.

Whatever be the results, it is clear that the upcoming elections are likely to bring about a generational shift to politics in Pakistan.