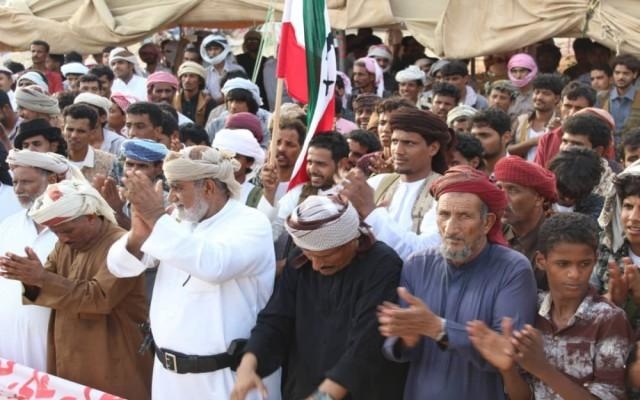 Members of tribal communities staged a sit-in for weeks before the coalition gave in. Photo: Middle East Monitor

Following months of local protests, the Saudi Arabia-United Arab Emirates (UAE)-led coalition is handing over control of Yemen’s Al Ghaydah airport in the eastern part of the country to civil authorities.

Until now, the airport which is near Yemen’s border with Oman, was under the supervision of Saudi-led forces. Local tribes in the Al Mahrah governorate had begun protesting against the Saudi-UAE presence about three weeks ago by announcing a peaceful sit-in.

The residents of Al Mahrah raised a number of demands, including the preservation of national sovereignty, the handing over of the two land outlets of Shahn and Sarfit and the withdrawal of Saudi military forces from Nashtoon port and Al Ghaydah international airport. The demands were also submitted to President Abd Rabbuh Mansur Hadi.

Saudi Arabia had sent military reinforcements to be stationed at Al Ghaydah international airport and land and sea outlets in Al Mahrah in December 2017, citing the need to check smuggling in the area. Saudi actions were not supported by tribesmen and politicians of Al Mahrah at the time but later on, they reached agreements with the local authorities to make sure that the governorate’s society remains non-militarized. Al Mahrah has been largely untouched by the conflict that has ravaged the rest of the country.

However, the Governor of Al Mahrah, Rajeh Bakrit, currently residing in Riyadh, asked the Saudis to intensify their presence so that he could take full control of the governorate and the local authority. This is likely to have caused the break-down of the agreement. Bakrit was also silent when it came to expressing support for the peaceful sit-ins organized by the tribal community.

In the wake of a direct military assault, the lives of the 400,000 civilians in the city will be in danger, the organizations have warned.

Earlier, Saudi-led forces had an altercation with Al Mahrah governorate security forces in November 2017, when they prevented the former from taking control of the airport. The handing over of control of the airport also inspired protests in Taiz, where Yemenis are unhappy over the lack of governance, crime and food security.

Yemeni President Abd Rabbuh Mansur Hadi had in March 2015 invited the Saudi-led coalition to enter the Yemeni civil war with the main goal of defeating the Houthis in northern Yemen.

In June, the Saudi-UAE led coalition attacked the Yemeni port city of Hodeidah despite many international organizations warning of an impending humanitarian tragedy, with the 400,000 residents of the city facing either death or displacement as a result. The coalition forces’ fighter jets pounded the city to assist the ground troops loyal to the Yemeni president.

A United Nations report released on July 5 revealed that almost 121,000 people had been forced to flee Hodeidah to escape death or physical injury. A UN Office for the Coordination of Humanitarian Affairs (OCHA) report stated that humanitarian partners had verified that more than 17,350 households had been displaced since June 1.

According to the report, more than 80000 people (10000 households) were provided assistance with food, emergency kits, and other life-saving support. Additionally, at least 50% of children in the locality were unable to attend school, and seven health institutions temporarily shut down or suspended operations.