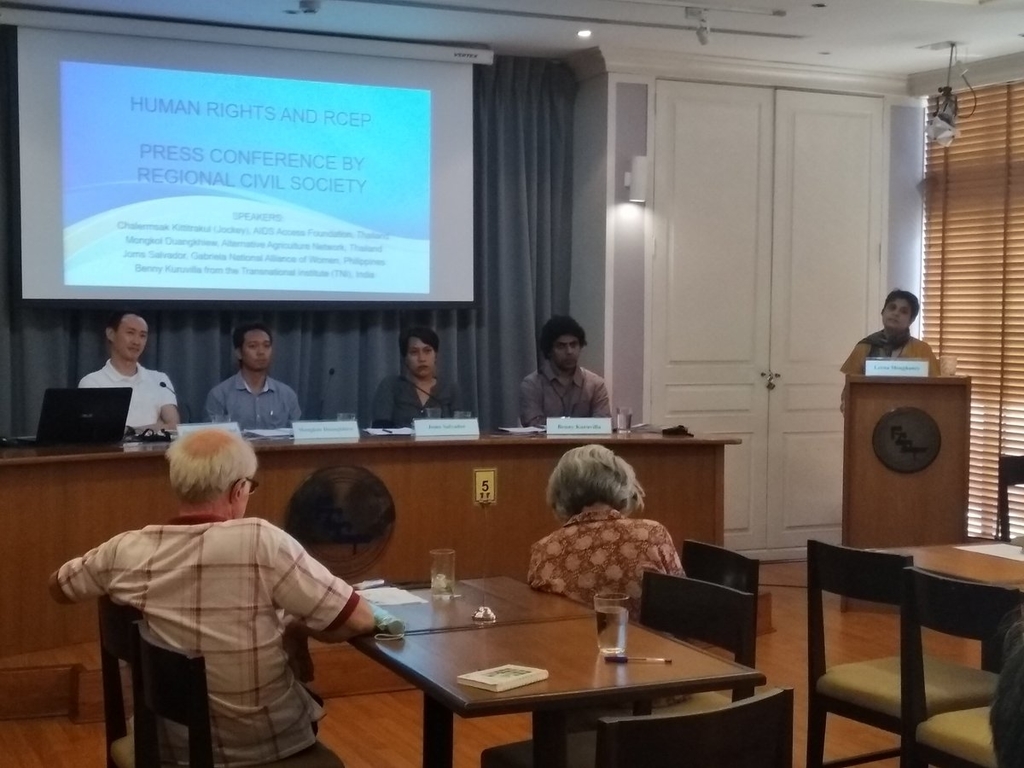 A coalition of trade unions and civil society organizations came together to oppose the agreement. Photo: V. Arun Kumar

With the 23rd round of negotiations of the mega free trade agreement – Regional Comprehensive Economic Partnership (RCEP) – going on in Thailand this week, representatives of nearly 80 civil society organizations, trade unions, peasant organizations, indigenous rights movements and academicians from different countries gathered in Bangkok today to oppose the provisions in the agreement and the secrecy under which it has been negotiated.

The RCEP has provisions for foreign corporations to sue governments for passing laws or pursuing policies which reduce their profits, and seeks stronger intellectual property rights for big pharma and the agro-chemical industry. It also pushes governments to privatize essential services and seeks to prohibit the regulation of these service providers. These provisions are likely to have an adverse impact on half the world’s population’s access to medicines, food, healthcare, control over national resources and labor rights.

The trade agreement, expected to be signed in November this year by 16 countries in the Asia-Pacific region, including member states of ASEAN, as well as Australia, China, India, Japan, South Korea and New Zealand, is likely to end up as one of most secretively drafted agreements in recent times.

Since the formal negotiations began in 2012, the public – and even the parliaments of the countries whose governments will be signatories to this far-reaching agreement – have not only been denied the ability to influence what will be agreed upon, but are also denied access to official information about what is being negotiated. This in violation of the ASEAN charter, which promises to adhere “to principles of democracy, the rule of law and good governance,” according to a report published today by a collaboration of civil society organizations and researchers.

Of the three levels of the public participation – categorized as High, Low and Fail – the way RCEP was negotiated was categorized as ‘Fail’ in this report. ‘High’, according to the standard of measurement used in compiling the report, is a grade given to those agreements which are drafted and agreed upon after ensuring all the “draft texts, negotiating processes and overarching government positions are made public in a timely manner”, allowing civil society and the elected representatives of the respective countries to carry out an independent assessment of impact the agreement will have on their economic, environmental and human-rights situations. This has to be done to not only determine whether or not the agreement has to be ratified, but also to influence what agenda their respective governments will push for in the process of negotiations.

Also necessary for this grading is a provision for ‘cancellation clauses’, which allow the political parties that come to power in the future to pull out of the agreement, or to modify parts of it, if the public mandate so demands.

While parliamentarians and civil society have been left with little say, large businesses have been provided with disproportionate access. They have not only received information about what is being negotiated, but have been in a position to set the agenda for the negotiation itself. As a result, the agreement, in its current form, contains a number of provisions which would bring enormous benefits to big businesses at the cost of the people of the countries whose governments are signing the RCEP.

One such provision is the investor-state dispute settlement (ISDS), which allows foreign companies to sue the governments in arbitration courts abroad for passing laws and regulations that might reduce the profits expected by them during investment. The ISDS, which is part of many other Free Trade Agreements (FTAs) too, has already been used by corporations to target states.

Indonesia, for example, has seven ISDS claims against it, three of which are from mining firms. One of these claims was made by Churchill Mining, a UK-based firm, which sued the state for $1.3 billion after its license for a certain coal mining project was revoked by the government to prevent environmental destruction. India, Korea and the Philippines have also been victimized by this provision.

Even if these cases are won by the governments, the cost involved is enormous, and is ultimately borne by the tax payers of the country. Egypt, for instance, did win a case against the French corporation Veolia, which had sued the government for reducing its expected profits by raising the national minimum wage. However, the six-year-long case cost the country millions of dollars in litigation fees.

“Increasing workers’ wages”, the report states, “is a recognized economic stimulus that provides development opportunities for an economy. Yet RCEP and other FTAs that include ISDS provisions give immense powers to private players to pressurize governments to refuse the legitimate demands of workers.”

Elimination of ‘trade-barriers’ is another agenda that has been pursued in the RCEP negotiations. The Minerals Council of Australia, a mining industry association, hired former senior officials in the Department of Foreign Affairs and Trade to “write a guide for Australian trade negotiators”. According to these officials, what RCEP seeks to overcome are the non-tariff barriers.

These include an elected government’s ability to pursue policies in the national interest, such as promoting local ownerships of mines, taxing foreign mining companies, obliging them “to keep processing and refining operations in country” in order maintain employment, or passing “laws to prevent all the profits from mining leaking out of the country, leaving only social and environmental costs behind.”

Apart from limiting a government’s ability to pursue such public policies, RCEP also pushes governments to privatize services, including essential ones such as provision of education, healthcare, electricity, water and waste management. Once privatized, the “ratchet” clause in the agreement will have the effect of ensuring that the governments’ ability to regulate these private service providers is systematically reduced over time.

Even the regulation of prices of essential services, such as water and electricity supply, healthcare etc. can be compromised, the report warns, adding, “Not only this, but it prevents governments taking back control of service provision, even in the case where private providers fail to deliver.”

As a result of lobbying by big pharmaceutical and agro-chemical industries, the Japanese and South Korean governments have pushed for intellectual property (IP) provisions in RCEP, which if ratified, will “broaden and lengthen Big Pharma’s patent monopolies, delay production and sales of generic medicines, and make IP subject to ISDS, putting public health safeguards.. hard won by countries like India, at risk,” the report states.

Chalermsak Kittitrakul, the Access to Medicines Campaign Officer for AIDS Access Foundation, said in Bangkok today, “Like other countries in the region, Thailand heavily relies on generic medicines, especially for high-cost diseases like HIV & AIDS, cancers, hypertension and heart-diseases. Thailand’s health insurance systems, which are fully and partially subsidized by the government, will be under threat if the lifesaving medicines’ costs become more expensive due to the abuse of patent system.”

Further, the extension of IP laws to agro-chemical industries coerces governments to criminalize the act of saving seeds of commercial varieties by farmers, which will help industries further monopolize food production and raise the prices of food grains.

In India, a country already reeling under a serious agrarian crisis, the RCEP negotiations “have been one of the most closely guarded secrets in the history of India’s trade policy making,” said Ranja Sengupta, a senior researcher at the Third World Network. Once the negotiations are complete, the central government in India can sign the agreement without any ratification from parliament. Further, the State governments, which “will bear the brunt of cheaper agricultural and manufacturing imports” resulting from the agreement, have also not been consulted, Benny Kuruvilla from The Transnational Institute pointed out. Pinarayi Vijayan, the Chief Minister of Kerala from the Communist Party (Marxist), has called this a violation federalism, a core value that is enshrined in the Indian constitution.

Criticizing the secrecy under which negotiations have been held, parliamentarians from different countries across Southeast Asia have come together under the forum, ‘ASEAN Parliamentarians for Human Rights,’ calling for transparency in the negotiations.

“At minimum, we need to open up the negotiations to public scrutiny and parliamentary oversight, and we call on all our governments to commission cost-benefit analysis of the final RCEP draft that will be made public before any agreement is signed,” said Tomasito Villarin, an MP from Philippines.

Calling for an assessment of the impact RCEP will have on human rights, Indonesian MP Mercy Barends warned that this trade agreement, if ratified “will have drastic consequences on people’s rights, particularly in Southeast Asia.” 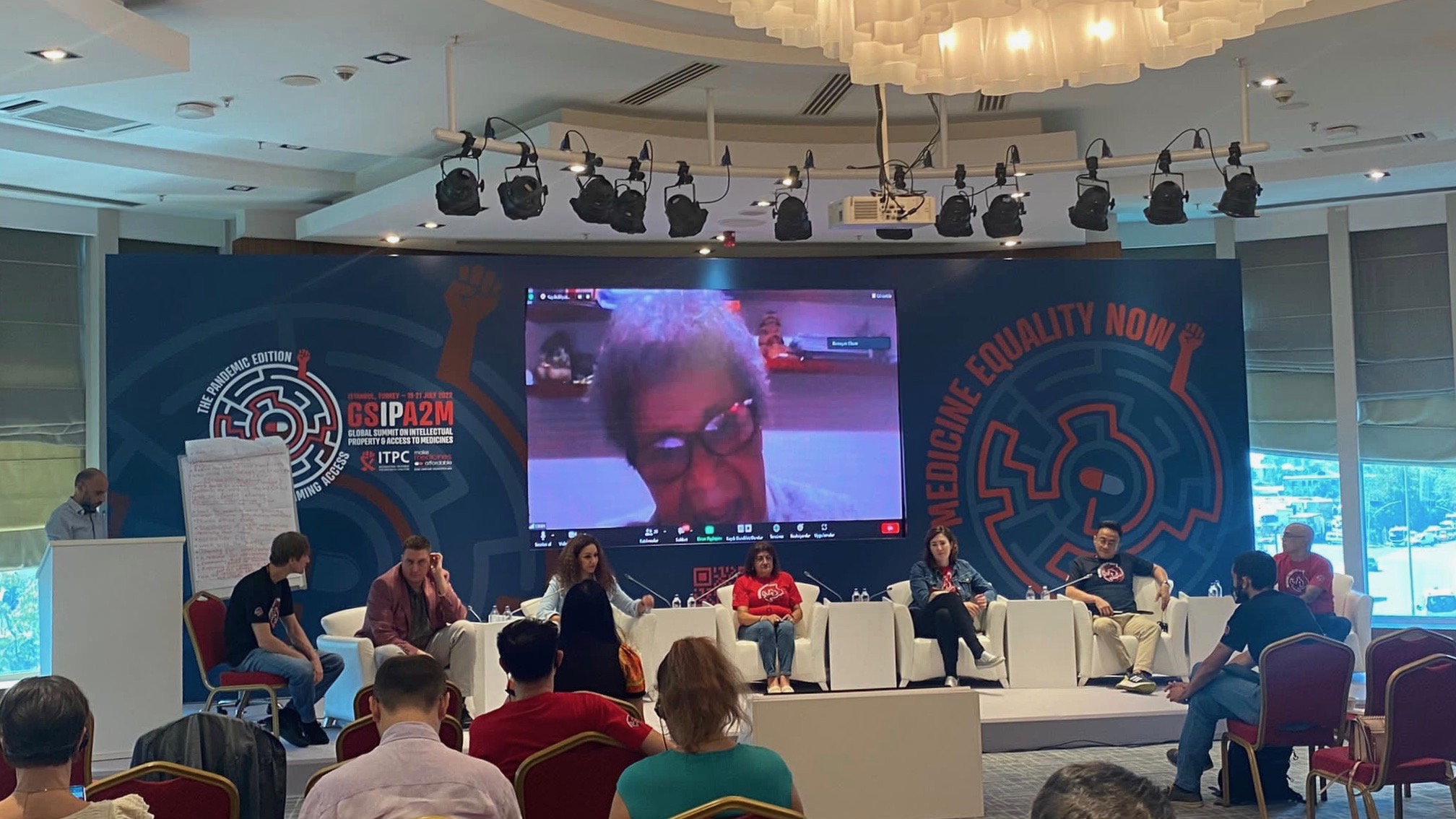 Sovereignty or dependence: Six reasons to not pay the IMF
RECENT ARTICLES