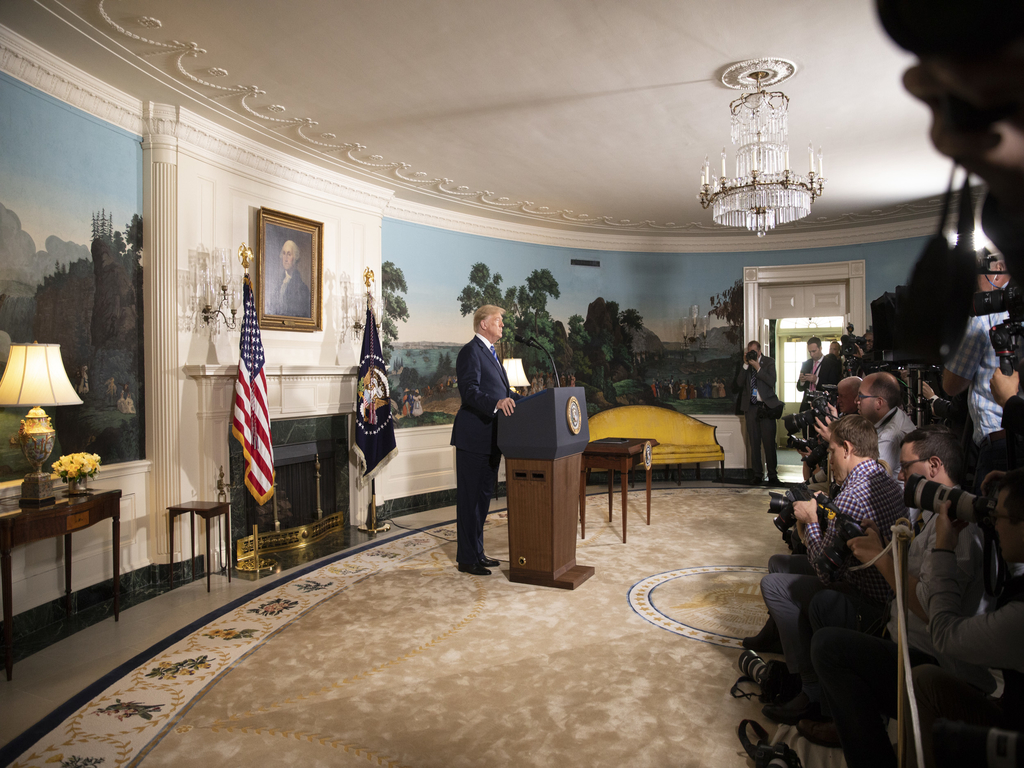 Donald Trump announces the US withdrawal from the Iran nuclear deal on May 8, 2018. Photo: The White House/ Wikipedia

US President Donald Trump on Sunday took to Twitter to threaten Iran and its president Hassan Rouhani with war, months after pulling out of the nuclear deal signed in 2015 between Iran and six countries. This is even as various players across the globe are figuring out how to respond to the US sanctions that will take effect in August and November.

Trump tweeted in all-caps, ““NEVER, EVER THREATEN THE UNITED STATES AGAIN OR YOU WILL SUFFER CONSEQUENCES THE LIKES OF WHICH FEW THROUGHOUT HISTORY HAVE EVER SUFFERED BEFORE. WE ARE NO LONGER A COUNTRY THAT WILL STAND FOR YOUR DEMENTED WORDS OF VIOLENCE & DEATH. BE CAUTIOUS!”

He was responding to a speech by Rouhani to a group of Iranian diplomats in which he warned the US administration against hostile actions towards Iran. Rouhani was quoted by the state news agency IRNA as saying: “Iran’s power is deterrence. We have no fight or war with anybody. But the enemies must understand well that war with Iran is the mother of all wars, and peace with Iran is the mother of all peace. We have never been intimidated—and will respond [to] threat with threat.”

The US president had announced that he would impose harsh, unilateral sanctions on Iran following his decision to exit in May the Iran nuclear deal, also known as the JCPOA (Joint Comprehensive Plan of Action) agreement.

Trump had announced plans to reimpose all suspended primary and secondary sanctions on Iran in two rounds. The sanctions target vital parts of the Iranian economy such as oil and finance. The first round of sanctions comes into effect on August 6 and will have an effect on areas such as financial transactions, dealings in gold and other precious metals, and the automotive industry. The second round of sanctions will take effect on November 4 and will cover sectors such as oil and gas, petrochemicals and shipping.

Companies that have contracts with Iran had been given a wind-down period of around 90-180 days to end those deals or else face sanctions. As a result, many big international businesses – France’s Total oil company, Germany’s Siemens and Italy’s Danieli – have already indicated that they would end their agreements with Iran. Airlines such as Austrian Airlines and Dutch KLM will reduce or cancel services. Japanese banks Mitsubishi UFJ Financial Group and Mizuho Financial Group said they would no longer handle transactions involving Iran.

“We urge the US to ensure that the structures of the JCPOA can remain intact, and to avoid taking action which obstructs its full implementation by all other parties to the deal,” the statement said.

The European Union’s chief diplomat Federica Mogherini issued a statement saying the deal was “delivering on its goal which is guaranteeing that Iran doesn’t develop nuclear weapons”.

The EU is working on imposing a so-called blocking statute, which will give European firms protection from US sanctions for doing business with Iran. The statute makes American court decisions and administrative actions regarding sanctions on Iran void in Europe. It also prohibits Europe-based firms from discontinuing their business ties with Iran due to foreign sanctions.

The EU, along with China and Russia, have been making attempts to keep the nuclear deal alive. It is highly unlikely that China and Russia will comply with the US sanctions. China is the biggest importer of Iranian oil.

Russian President Vladimir Putin, during his recent meeting with Trump, too had described the sanctions as “harmful” and “unconstructive”, according to Putin’s special envoy to Iran, Alexander Lavrentiev.

Countries like India, South Korea and Japan are seeking waivers from the sanctions from the US since they are heavily dependent on Iranian oil. Iran recently became India’s 2nd largest oil supplier after Iraq. However, it is still unclear whether India will abide by the US sanctions. The Indian foreign minister in May had said that India would continue trading with Iran, as India followed only UN sanctions and not those imposed unilaterally by a country. But a month later, in June, India’s oil ministry asked refiners to prepare for a ‘drastic reduction or zero’ imports from Iran from November.Turkey has also said that it will not be implementing the US’ unilateral sanctions on Iran. Foreign Minister Mevlüt Çavuşoğlu said that he conveyed the same to a visiting US treasury department delegation last week.