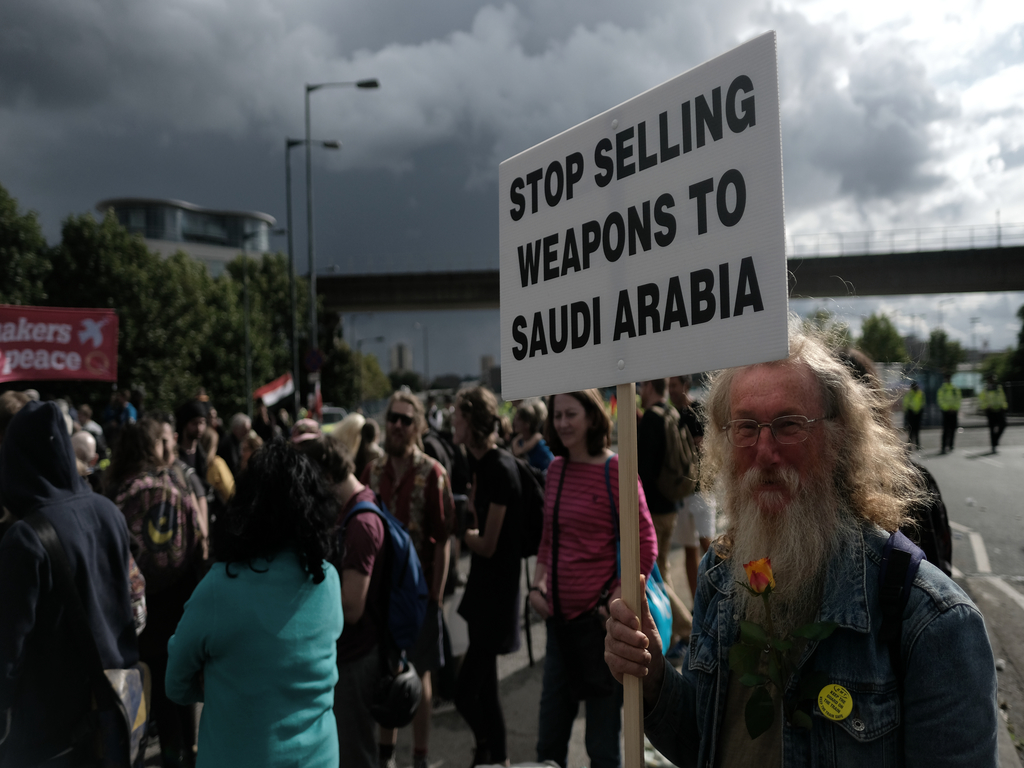 Other sectors of the US economy might be stagnant, but the arms industry is booming. Photo: By Alisdare Hickson/Wikipedia

US President Donald Trump has made economic nationalism the centrepiece of his political agenda. ‘Made in America’ is one his touchstones. Trade wars are part of his arsenal. Last month, in the shadows of the White House, Trump met with his advisers to cement a renewed approach – sell more weapons around the world.

Other sectors of the US economy might be stagnant, but the arms industry is booming. According to the Stockholm International Peace Research Institute (SIPRI), US arms exports increased by 25% from 2013 to 2017. The United States now accounts for over a third of total arms exports. The arms deals, since 1975, have escalated as was dramatically shown by a video made by Will Geary based on SIPRI data. It is overwhelming to see the tracks of these weapons sales down to Latin America, for instance, at a time when dictatorships ruled the continent. There was no concern for human rights at that time. Nor will there be any concern in the future.

Trump’s economic advisor Peter Navarro has insisted upon as much deregulation as possible in the arms sector. The new policy, overseen by Navarro, will allow the US government to hasten arms deals approvals to foreign countries, dismiss human rights concerns and partly shift the burden of arms promotion from the private corporations to the US presidency.

The Obama administration, under pressure from human rights groups, had inserted an important sentence into a 2014 Conventional Arms Transfer Policy statement. This sentence said that the US would not sell arms to countries that conduct ‘attacks directed against civilian objects or civilians’. The Trump administration, in its own policy statement from April, simply added one word to this sentence – intentionally. If the attacks on civilians are deemed to be unintentional, then arms sales are fine. Who will adjudicate the intentionality of the killing of civilians has not been made clear.

After NATO’s 2011 war on Libya, a question was raised by the United Nations about the death of civilians in that country. The UN Human Rights Commission was all set to investigate these deaths. It asked NATO to cooperate in the investigation. NATO’s lawyer Peter Olsen wrote back that NATO would not provide any cooperation. Instead, Olsen wrote in February 2012, NATO hoped that ‘in the event the Commission elects to include a discussion of NATO actions in Libya, is report clearly states that NATO did not deliberately target civilians and did not commit war crimes in Libya’. This means that NATO would be automatically seen to be above the possibility of war crimes. If this is the standard set by NATO, then how is it possible for any adjudication to take place about intentional war crimes? The one word added in by the Trump administration makes a mockery of an already laughable policy about human rights and arms sales.

The beneficiaries of this new policy will be the major arms manufacturers: Boeing, Lockheed Martin, Raytheon, General Dynamics Corporation, United Technologies and Northrop Grumman. These six firms are among the eight largest weapons dealers on the planet (the two that are not American companies are the British arms dealer BAE Systems and the European arms dealer Airbus). These private companies sell weapons to 167 countries across the planet – that’s 85% of the nation-states.

Focus for this is on Yemen, where Saudi Arabia and the UAE are conducting a ruthless war against this impoverished country. The UN recently said that Yemen has become the world’s ‘worst humanitarian crisis’. Three quarters of the country’s population – around 22 million people – are in terrible straits, with hunger and disease rampant. Half of this population – over 11 million – are children. The UN has said that almost all children in Yemen have been adversely impacted by the Saudi and UAE bombing war.

In March, the US government approved a $1 billion arms deal with Saudi Arabia. A resolution in the US Senate to block arms sales to Saudi Arabia because of the Yemen war was killed off by lawmakers. But this sale was small compared to what the US has sold to Saudi Arabia over the past half-decade. Arms sales to the Kingdom have increased in this period by 225%. Last May, when Trump was in Saudi Arabia, the US firms inked deals worth $110 billion in arms sales. Saudi Arabia is the largest purchaser of US arms.

The US National Security Council, in a statement, notes that the Trump administration ‘is intent on ensuring that US industry has every advantage in the global marketplace’. This means that the Trump administration will make sure that the monopoly position of US arms manufacturers is maintained and that it will continue to fuel conflict across the planet. In 2015, Noam Chomsky said that the United States is the ‘world’s biggest terrorist’. This is the kind of thing he had in mind – the bombs manufactured by US arms companies, promoted by the White House, that kill civilians in places such as Yemen.

A child dies every ten minutes in Yemen. Lockheed Martin, as much as the Saudi and Emirati governments, should be in the dock for those deaths.