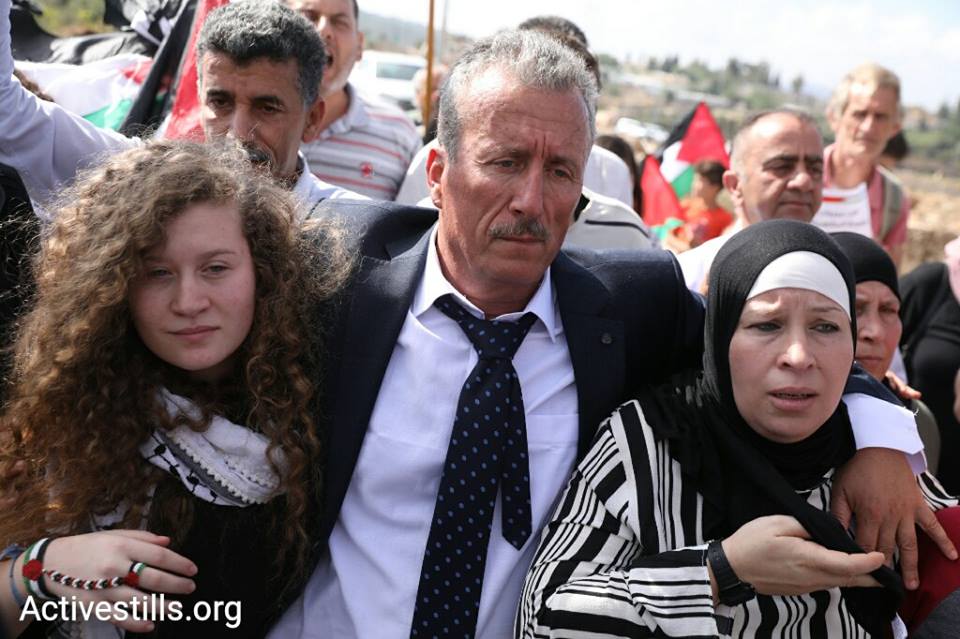 Ahed , her mother Nariman , who was also under arrest, and her father Basem after their release. Oren Ziv/ActiveStills

Ahed Tamimi, the Palestinian teenage girl who was jailed for eight months by Israel for slapping and shoving Israeli soldiers outside her home in Nabi Saleh village, was released on Sunday after the completion of her prison sentence. 17-year-old Ahed was taken along with her mother, Nariman Tamimi, who was also in prison for a similar time, from the Israeli jail to the Tulkarem checkpoint where they were released.

Nabi Saleh villagers greeted them with cheers, banners and Palestinian flags. Ahed’s father, Bassem Tamimi, Aida Touma-Sleiman, a member of the Knesset, and activists from Palestine, Israel and various other countries were present.

Ahed spoke to the press shortly afterwards, thanking everyone who had stood by and supported her and her mother during the year-long ordeal, while also saying, “my happiness is not complete without my sisters (Palestinian female prisoners), who are not with me. I hope that they will also be free.”

“In the end I want to say that the power is with the people, and the people will and can decide their destiny and decide the future. Women are a key part of the Palestinian struggle for freedom, and the women’s role will continue to expand, not only in the struggle but by producing new generations that can continue the struggle, ” she said, adding, “We say: Leave, leave occupation.'”

She also said that she would continue her studies and that she planned to become a lawyer so that she could represent other Palestinians jailed in Israel.

On the eve of her release, the Israeli army had closed entry to her native village Nabi Saleh in Ramallah district in the occupied central West Bank.

Locals had reported the presence of a large Israeli occupation force in the village, completely closing its entrance and preventing any entry and exit. Weekly protests are organized at the village on Fridays against the illegal confiscation of land to facilitate the expansion of the illegal Halamish Israeli settlement and against the Israeli capture of the village’s natural spring, its primary water source.

Ahed was caught on video with her older cousin Nour Tamimi, shouting at Israeli soldiers outside their home in Nabi Saleh on December 15th 2017. They later proceeded to slap, kick and shove the two soldiers. Her 15-year-old cousin, Mohammad Tamimi, had been shot in the head with a rubber-coated steel bullet just a day before her confrontation with the soldiers.

She was arrested on December 19 after the Israeli army raided her home. Her cousin Nour and her mother Nariman Tamimi were also later arrested. After being held in illegal detention for three months, an Israeli military court tried her on charges of assault, stone-throwing, incitement to violence and other charges. She was given an eight-month prison sentence on March 21 after a plea deal was reached. The sentence was criticized by many who noted that a similar punishment had been given to an Israeli soldier for shooting dead a Palestinian.

Tamimi’s lawyer Gaby Lasky on Thursday had said “Tamimi’s long detention stemmed from political motives than from legal reasons. Legal proceedings are not intended to solve the Israeli-Palestinian conflict, and instead of sending minors to prison for resisting the occupation, the time has come for a courageous leadership to free us all from the chains of the occupation.”

Omar Shakir from Human Rights Watch highlighted the “endemic ill-treatment of Palestinian children in the Israeli legal system”, saying that Ahed’s release could serve as a moment of reflection on their plight.

Israeli human rights group B’tselem says that at least 350 Palestinian children are currently in jail in Israeli prisons, out of a total of 6,500 Palestinian prisoners jailed by Israel. Ahed Tamimi’s case also throws light on the disproportionate conviction rate of 99 percent for Palestinians in Israeli courts.