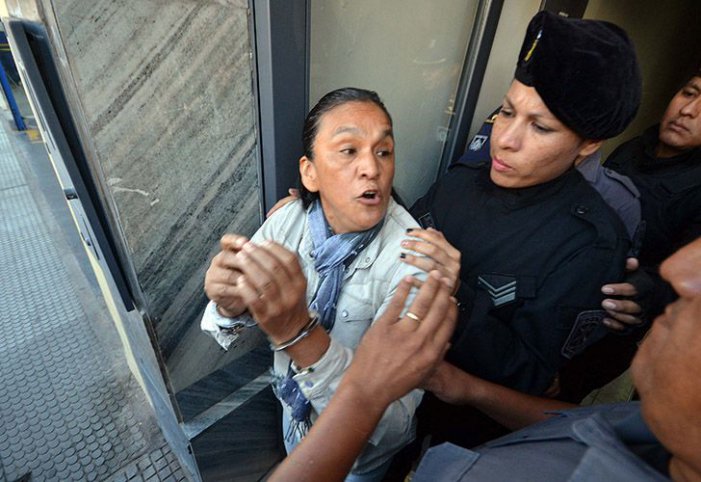 Argentine social leader Milagro Sala, who has been in detention since January 2016, is on a dry hunger strike following an order to shift her to a federal prison. Sala, the leader of the Tupuc Amaru organization [Argentine union and civil rights organization] and a deputy of the Parlasur [the Mercosur Parliament, an institution of the Mercosur trade bloc], was held on charges of inciting crimes and sedition.

The case against Sala is considered by people’s movements and organizations across Latin America as one of political persecution by the right-wing government of Mauricio Macri due to the rampant legal irregularities, and due to Sala’s opposition to the provincial and national government. The fight for her freedom has been taken up by many organizations across Argentina, Latin America and the globe. International human rights organizations such as CIDH and Amnesty International have intervened to demand her freedom and fair treatment in the legal system.

From the time of her arrest till August 2017, Sala was detained at the Alto Comedero prison in the Jujuy province. On the recommendation of the Inter-American Court of Human Rights, she was relocated to El Carmen for house arrest.

At the end of last month, Sala was found unconscious and was transferred to a hospital. The Committee for the Freedom of Milagro Sala held Jujuy governor Gerardo Morales responsible for her health and denounced the provincial judiciary for the breach of the interim ruling by the Inter-American Court of Human Rights. The court had said she was to be held in detention in her house in the district of Cuyaya. However, she was held in a place far from the city in a location without telephone connectivity.

The order to transfer Sala to the Third Federal Penitentiary Complex in the locality of Güemes, Salta, was notified on Tuesday night.

The Centre for Legal and Social Studies (CELS), the Lawyers of Northwest Argentine for Human Rights and Social Studies (ANDHES) and the Argentina section of Amnesty International filed a complaint before the Inter-American Court of Human Rights against the “obvious failure to comply with the provisional measures ordered” by this organization and ratified by the Supreme Court of Justice of the nation.

The appeal made by Sala’s defense to the Supreme Court indicates that the decision of Judge Paul Pullen Llermanos “makes the Argentine state to incur international responsibility, as it implies not complying with resolutions that are obligatory”.