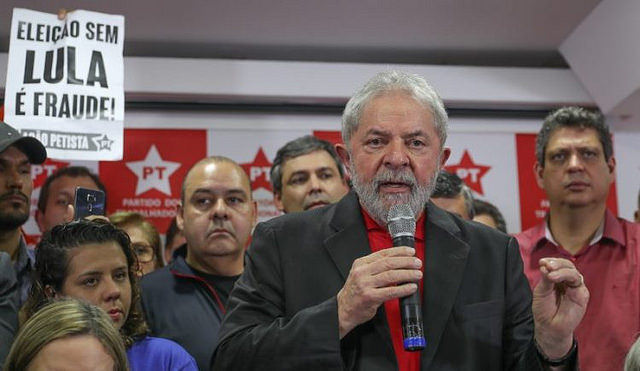 The Office of the United Nations High Commissioner for Human Rights (OHCR)  requested this Friday that the Brazilian State take measures to ensure that former president Luiz Inácio Lula da Silva can enjoy and exercise his political rights as a presidential candidate in the country’s upcoming elections.

The statement is an interim measure in response to an appeal filed by Lula’s Brazilian lawyers, Valeska Teixeira Zanin Martins and Cristiano Zanin Martins, and British lawyer Geoffrey Robertson.

The OHCR wrote that Brazil’s authorities should “take all necessary measures to ensure that the author [Lula] enjoy and exercise his political rights while in prison, as a candidate to the 2018 presidential elections, including appropriate access to the media and members of his political party.”

The Brazilian State, the committee wrote, should “not prevent the author from standing for election at the 2018 presidential elections, until the pending applications for review of his conviction have been completed in fair judicial proceedings and the conviction has become final.”

The OHCR based its decision on the potential violation of Article 25 of the International Covenant on Civil and Political Rights, signed by Brazil in 1992, and the existence of a possible irreparable harm to Lula’s rights. The country acknowledged the committee’s jurisdiction in 2009.

The article mentioned by the OHCR establishes that “every citizen shall have the right and the opportunity (…) without unreasonable restrictions: a) to take part in the conduct of public affairs, directly or through freely chosen representatives; (b) to vote and to be elected at genuine periodic elections which shall be by universal and equal suffrage and shall be held by secret ballot, guaranteeing the free expression of the will of the electors; (c) To have access, on general terms of equality, to public service in his country.”

Lula’s lawyers released a statement arguing that, based on the OHCR’s opinion, “no Brazilian State entity can pose obstacles for ex-president Lula to run in the 2018 presidential elections until his conviction becomes final and unappealable in fair judicial proceedings; also, it will be necessary to grant him unlimited access to the media and members of his political alliance during the campaign.”