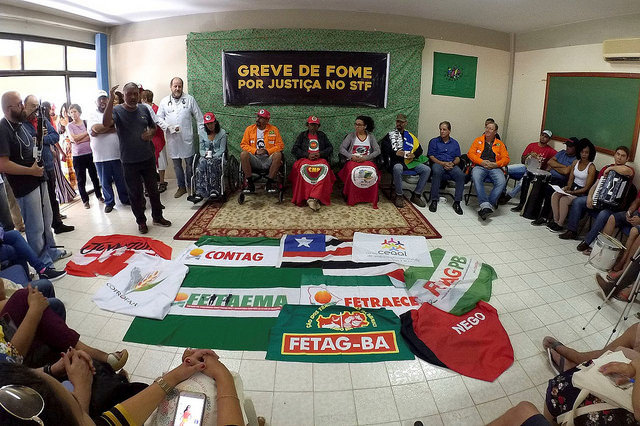 The seven activists from people’s movements who are staging a hunger strike since Jul. 31 in Brasília, capital city of Brazil, receive visitors and support on a daily basis.

The hunger strikers, who demand freedom for ex-president Luiz Inácio Lula da Silva, are focusing their demand on the Supreme Court, so that chief justice Cármen Lúcia place on the docket three petitions – called ADCs – that question the imprisonment of defendants while their cases are still appealable. This is the case, for example, of the former Brazilian president, who has been in prison since Apr. 7.

On Sunday, the protesters received approximately 120 members of the National Political Education School (ENFOC) of the National Confederation of Agricultural Workers (CONTAG), who are visiting Brasília to attend a course and took the opportunity to express their solidarity with the group.

Student Flaviana Almeida, from the state of Maranhão, thinks the hunger strikers’ initiative is an example for people’s political activism. She believes visiting them strengthens the actions of those who are on the front line fighting for rights. “It restores our energy to keep struggling,” she says.

Solidarity also came from beyond Brazilian boundaries. In addition to students from different states, the CONTAG delegation also gathered activists from other countries, who expressed their support to the hunger strikers.

One of them was student Marta Lopes, from Paraguay. She told Brasil de Fato that the key demand of the hunger strike – releasing ex-president Lula – requires joining national and international forces. “We consider this an international cause. Brazil is big and this is a topic of struggle for us. It means a lot,” she said.

During the visit, there was a political rally at the venue where the hunger strikers are accommodated, with members of parliament, jurists, and other supporters. “We are here giving back the food they are giving us every day to alleviate our hunger for justice. We are part of a big chain to bring justice back to this country,” congresswoman Erika Kokay said.

The hunger strikers thanked for the solidarity and reiterated that they will keep striking indefinitely. This Monday marks the 21st day since they started the protest.

“Deep down, what feeds the human being is not what supports the body. We definitely start to have much more resistance than we could imagine,” said hunger striker Rafaela Alves, from the Small Farmers’ Movement (MPA).

The hunger strike is organized by La Via Campesina movements, the Levante Popular da Juventude (Youth Uprising), and the People’s Movements Center (CMP).