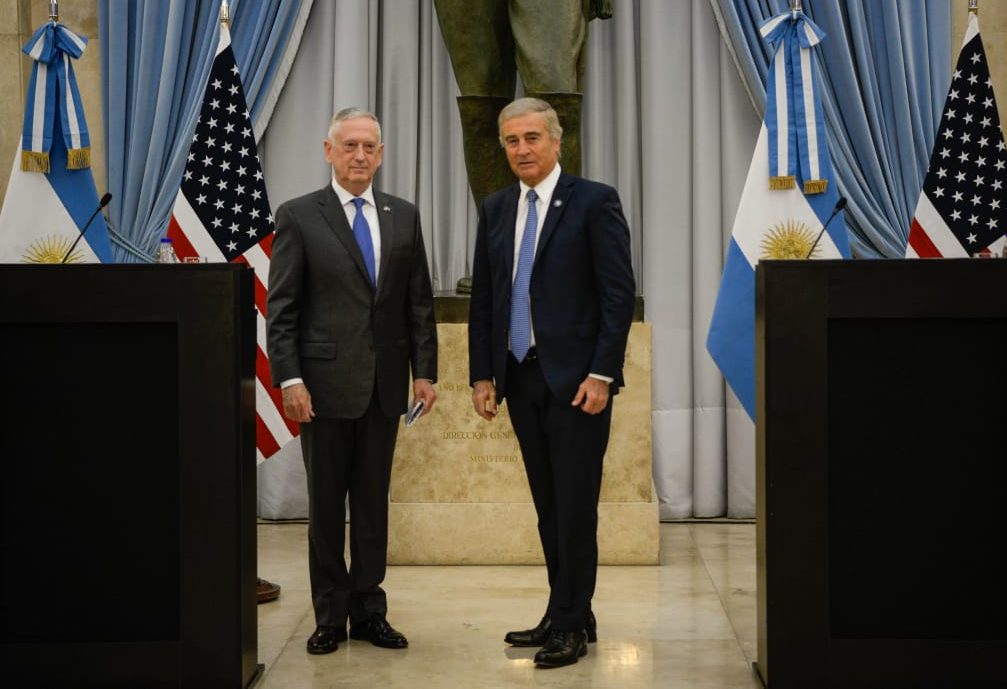 US defense secretary James Mattis’ tour of Latin America last week led to concerns among the progressive sections in the continent regarding its plans for the region.

At a conference with Argentine defense minister Oscar Aguad, the US official discussed the role of the armed forces in confronting new challenges in the region. The comment is not accidental,  as it comes shortly after the decree of President Mauricio Macri that authorizes the military to intervene in matters of internal security.

In a week-long tour that included visits to Brazil, Chile and Colombia, the delegation led by Mattis met with senior military officials of each country to “coordinate in the areas of technology, science, politics, military and defense”, according to an official communiqué.

In addition, the tour aimed at further harassing and isolating the Bolivarian Republic of Venezuela. In his previous visit to Brazil, Mattis had described the government of Nicolás Maduro as “oppressive and power-hungry” and insisted on the need to intervene in order to overthrow him and save the country from a “humanitarian crisis”.

Another reason for the tour was US concern over the increasing geostrategic influence of China and Russia in the region. According to O Globo [a conservative Brazilian media house based in Rio de Janeiro], at a meeting, Mattis warned Brazilian General Joaquim Silva E Luna to be careful while choosing his associates/partners and “reduce dependence on China”.

Commenting on this, former secretary of Union of South American Nation (UNASUR), the Colombian Ernesto Samper, said that while U.S. officials “speak of defense, weapons and massive destruction of illegal crops, the Chinese authorities come to talk about infrastructure, hospitals and schools”.

When Trump appointed Mattis as the Secretary of Defense in December 2016, he referred to him as the “General of the Generals” and compared him with George Patton, who led US troops during the Second World War.

Mattis is a four star general who retired from the Marine Corps after 44 years of service. In that period, he was commander of a battalion in the First Gulf War (1991) and was in charge of the invasion of the Marines in Afghanistan (2002) and Iraq (2003).

According to the book ‘Fiasco’ written by American journalist Thomas Ricks, at the time of the occupation of Iraq, Mattis said: “I come in peace. I didn’t bring any weapon. But with tears in my eyes I tell you this: if you annoy me, I will kill you all.”

The representative of the most warmongering sector within Trump’s cabinet, Mattis responds directly to the interests of the military-industrial complex that designs U.S. foreign policy and that throughout the history, has conceived of Latin America as its backyard.