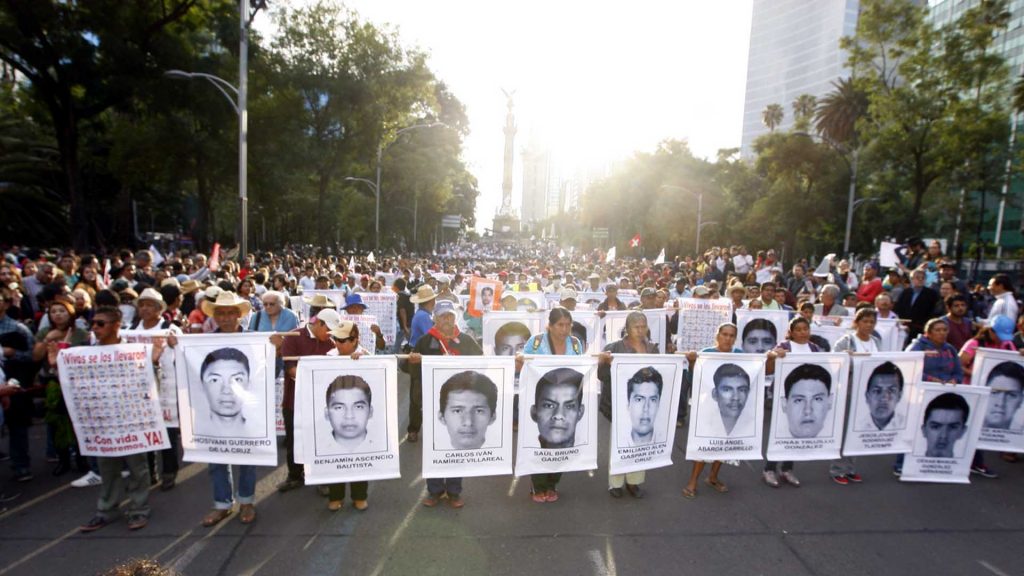 The families and friends of the missing students have expressed dissatisfaction with the official investigation.

Mexican president-elect Andres Manuel Lopez Obrador has announced that once he assumes office, he will reopen the Ayotzinapa case and appoint a National Truth Commission to investigate all cases of forced disappearances.  The announcement came in the wake of widespread anger and discontent in Mexican civil society, and concerns from around the world about the flaws and irregularities in the investigation of the case of the forced disappearance of 43 students in September 2014.

September 26, 2014, was a long, violent and chaotic night that still remains riddled with confusion and mystery as the truth has yet to be fully uncovered. What is known, through information gathered from the students who survived, witnesses and independent human rights investigations, is that students of the Raul Isidro Burgos Rural Teachers College of Ayotzinapa were preparing to travel to Mexico City for the commemoration of the Tlatelolco massacre of 1968. As the students were headed back to Ayotzinapa after having commandeered several buses for their trip to the capital (a yearly tradition grudgingly tolerated by the community and bus companies), law enforcement agencies and other armed actors launched a calculated and coordinated assault on the student caravan. The law enforcement officials shot at the buses and detained 43 students who were never seen again.

From that point on, many questions remain about what happened. Originally, the government claimed that the local police had handed over the 43 students to the Guerreros Unidos cartel, who supposedly killed them, incinerated the bodies and disposed of the remains in a nearby river. Members of the cartel confessed to this crime and the state admitted that the local police had collaborated with the cartel in the disappearance of the students.

There have also been accusations that the police intercepted the students under the order of the mayor of Iguala on the presumption that they were heading to the city to disrupt an event hosted by his wife. Even though the mayor refuted the allegations, he later resigned from his post and fled to Mexico City with his wife. They were both subsequently arrested in another case for allegedly murdering an activist from Guerrero.

For family members and human rights organizations, the official story does not add up. The Inter-American Council for Human Rights criticized the official investigation report in 2015 for not having adequate evidence to substantiate the official version. Many believe that the federal government and the army were directly involved and that the government is using the Guerreros Unidos story as a cover-up to protect high-ranking officials and institutions, painting the massacre as a case of corrupt local police personnel colluding with drug cartels, not uncommon in Mexico. Activists have pointed out that the students from Ayotzinapa College were very active in teachers’ protests against the educational reform bill proposed by the government in 2013, and were committed to struggling against the regime of neoliberalism in Mexico.

Enrique Pena Nieto’s government received heavy criticism from around the world over this issue. The relatives of the students and their friends had appealed to Lopez Obrador to take up the matter again in order to achieve true justice for their loved ones, as well as reveal the role of politicians and security forces in the abduction and disappearance of the students.