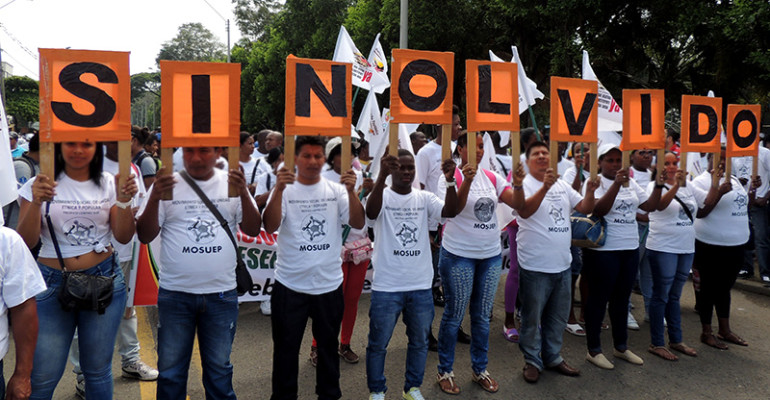 It is difficult to know the official tally of just how many social leaders have been assassinated in Colombia this year alone. The names, ages, photos and stories of social leaders appear daily on social media, local radio stations and newspapers.  Yet, the highest-ranking officials in Colombia, including the newly inaugurated President Ivan Duque, have yet to take serious action to stop the horrific violence that has killed hundreds merely for seeking to create a better, peaceful and more just Colombia. Activists took to Twitter on August 2 with the hashtag #DuquePareElGenocidio (#DuqueStopTheGenocide) to denounce the inaction of the president after five social leaders were assassinated in 48 hours.

Oliver Herrera Camacho was the president of a community action board in the town of Brisas del Guayabero in the department of Meta. The human rights representative of the organization said that he was assassinated on September 1 when two heavily-armed men arrived at his house at 7 pm and shot him.

Early on September 2, Alirio Arenas was assassinated by armed men. Arenas (45) was a social leader and council member in the Convención municipality in the department of Santander from the Alternative, Indigenous and Social Movement (MAIS) Party and the Humane Colombia Movement. He had previously reported death threats he had received  but was not assigned a security scheme through the government program.

On September 3, Paola Rodriguez, an indigenous leader of the Kamentsa people and a teacher in the Rural Educational Center Atún Ñami in Villagarzón, Putumayo, was assassinated along with her husband Alonso Taicus of the Awa indigenous people. One of their daughters was injured in the attack.

“#DuqueStoptheGenocide In Putumayo, a teacher and her husband are assassinated”

Last week, James Escobar was travelling on his motorboat on the Mira River on August 29 when he was intercepted by armed men who shot and killed him. His body fell into the water and was found the next day by members of the National Army when it washed ashore. Escobar was a member of the board of the directors of the Consejo Comunitario Alto Mira y Frontera (Afro-Colombian Community Council of Alto Mira and Frontera), an organization that has suffered constant threats, criminalization, persecution and assassinations of several of its members.

The Alto Mira and Frontera community lives in the municipality of Tumaco in the department of Nariño, one of the most important coca-crop producing municipalities of the country. It also serves as a river corridor that connects to the Pacific Ocean. The organizations of the zone have been promoting the replacement of illicit coca crops, which has made the inhabitants military targets. Despite the countless assassinations and threats, and reports of such incidents made by local organizations, human rights groups and the ombudsman office to the government, no concrete measures have been taken to protect the inhabitants of the region.

The ombudsman’s office stated on Twitter, “As petitioners of the precautionary measures for the Community Council of Alto Mira and Frontera before the Inter-American Commission on Human Rights, we reject the assassination of James Escobar, member of the Town Board of Miras Palmas. We demand urgent protection for its members.

A few days ago, on August 27, Héctor Montoya and his wife were assassinated by armed men while driving on the main road in Caqueta. Montoya had been forced to leave his hometown,   where he had established the Foundation New Dawn, due to the threats he had received. After settling in Caqueta, he continued his struggle and thus, the persecution also followed him, eventually taking his life.

It is important to recall that many of the assassinated social leaders had reported the threads, harassment and intimidation to different government entities. Social movements, human rights organizations and family members of the victims have pointed out that there is a need for more than symbolic measures such as bullet-proof vests or a button you can press that automatically calls the authorities if you are in danger. What they have sought from the national government is the dismantling of the criminal structures that benefit from the silencing of opposition and those who seek peace. They point out that the tragedy that hundreds of families are forced to endure should not be reduced to mere statistics but that they and the organizations of the assassinated social leaders should get justice through the truth behind these crimes being revealed.

For more on what is behind the assassinations of social leaders in Colombia:

Nine massacred in the Catatumbo region in Colombia

Targeting of activists continues in Colombia