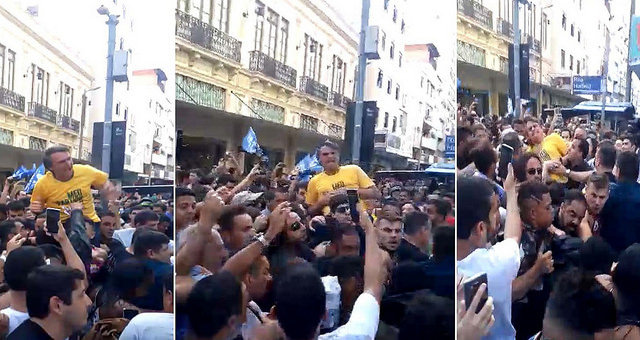 Brazilian presidential candidate Jair Bolsonaro was stabbed in the stomach on Thursday during a campaign event in Juiz de Fora, a city in Minas Gerais State. He was being carried by one of his bodyguards when the attack happened and was taken to the hospital, where he underwent surgery for injuries to his intestines, a hospital spokesperson told journalists.

The assaulter was surrounded by Bolsonaro supporters and immediately arrested and taken to a local police station. Police officers said it was an isolated attack by an individual who disagrees with the ideas advocated by the far-right presidential candidate.

“To me, it seems that, when democracy is brought into discredit, like when there’s a ploy to remove Dilma [Rousseff, Brazil’s former president ousted in 2016] from office – which was a wile itself –, then Lula’s imprisonment – something absolutely arbitrary that even those who support it know it’s a dirty move, a ‘beanball,’ something like that –, people start to resort to violence. Violence on the streets rises, violence against women rises. The ‘psychopathicization’ of society at large rises,” the psychoanalyst told Brasil de Fato.

A week ago, during a rally in Acre State, Bolsonaro told supporters that, after winning the elections, they would “kill them all,” referring to Workers’ Party supporters and leftists in general.

One of his main campaign platforms is loosening gun restrictions so that civilians can take crime fighting into their own hands and big farmers can attack rural movements.

Bolsonaro has been rising as the most prominent far-right name in the presidential race since Brazil’s last election, in 2014, and his pro-violence views are in tune with the rise of violence in the country’s political landscape.

In April this year, the brutal murder of Rio de Janeiro councilwoman and human rights activist Mariellle Franco shocked the country. She was shot to death next to driver Anderson Gomes in his car when she was coming home from a political event with black women. While there is strong suspicion that paramilitary groups are involved, five months since the crime, the police still haven’t found the shooters or who ordered it.

Earlier, in March, ex-president Luiz Inácio Lula da Silva’s caravan was attacked by shooters while touring around southern Brazil. In 2015, a homemade bomb was thrown at the headquarters of the Lula Institute, in São Paulo.