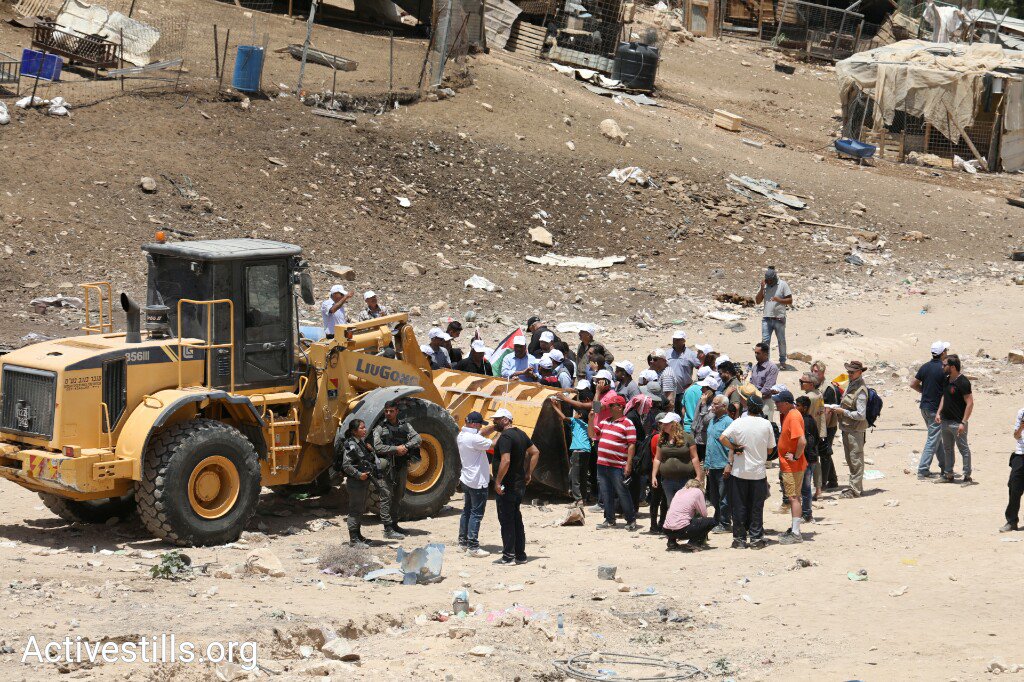 Protests broke out in the village in July when bulldozers were brought in to begin the demolition. Photo: Oren Ziv/Activestills

A day after Israel’s supreme court gave the green light for the demolition of Khan al-Ahmar village in the occupied West Bank, Palestinian authorities, on September 6, announced that they would be seeking international intervention to stop the demolition.

The villages have time only till September 12 unless the court reverses its decision. After this date, the village will be razed down to make way for the expansion of Jewish settlements. This will be a major step towards achieving the Israeli agenda of isolating Jerusalem from the rest of Palestine, and splitting the West Bank in its middle with a strip of settlements between its northern and southern part, rendering the two-state solution unviable.

The village, about eight kilometers to the east of Jerusalem, was the refuge of 32 families of the Bedounin Jahalin tribe, consisting of 173 members, 92 of whom are minors. After being driven out of the Tel Arad region in the Negev desert in southern Israel in the 1950s, the community had moved to a site on the West Bank, from where they were driven out again to build the Jewish settlement of Kfar Adumim, in violation of international law.

Khan al-Ahmar is located two kilometers to the south of the settlement and its residents settled there after buying the land from a Palestinian. The residents live in tents and makeshift shacks of corrugated metal sheets, without electricity supply or running water. These are amenities the state of Israel has, since its occupation of the West Bank in 1967, consciously decided not to provide, as a part of its unstated policy to make their lives so unlivable that they leave “voluntarily”.

However, the villagers set up a small ill-equipped clinic, a mosque and a school built using tyres and mud in 2009 with the help of an Italian NGO. This “school of tyres”, as it is popularly known, serves 170 pupils, of whom 35-40 are from the village, while the remaining come from surrounding villages.

All these structures, which are set to be demolished in a week, are deemed illegal constructions by the Israeli state, because the villagers did not procure permissions from the Israeli civil administration – an innocuous name given to the occupying Israeli army’s bureaucratic arm. The civil administration was given temporary administrative control over ‘Area C’ of the West Bank by the Oslo accords. Incidentally, the accords also stipulated that the control had to be gradually transferred back to Palestine after the formation of the Palestinian Legislative Council.

In this area, whose control never was returned to the Palestinian state, any constructions require the permission of the Israeli civil administration. Even making a formal application to request permission is beyond the access of undernourished villagers of Khan al-Ahmar, which falls under Area C. Throughout the area, only three of the 108 professionally developed construction plans proposed by Palestinians since 2011 have been approved, while illegal Israeli settlements in the region enjoy all kinds of sophisticated infrastructure.

In May, Israel’s supreme court, dismissing the complaints of the villagers of Khan al-Ahmar, accepted the government’s argument that these constructions were illegal because necessary permissions were not procured, and validated the demolition order the government had served before.

In the month of July, when the state began preparations to flatten the village by deploying security forces, along with construction workers who started laying down a road to make way for bulldozers and other machinery, a number of petitions were filed by residents. Some of these demanded that the demolition itself be stopped by scrapping the court’s previous order, and others sought a temporary stay until alternative accommodation was found for the villagers. The site the state had proposed to relocate the villagers of Khan al-Ahmar to was beside the garbage mounds of the Abu Dis landfill.

On August 1, after imposing a temporary stay, the court, on hearing a petition by the school community, asked the government to provide a detailed document proposing an alternative site for relocation. In response, the government proposed that at some unspecified time in the future, another site would be allotted in the desert land in the south-west of Jericho – but only if the Palestinians in three surrounding communities also agree to relocate to the site along with them ‘voluntarily’, after signing a no-objection affidavit.

A show of bad faith

Calling this offer “a show of bad faith”, an Israel-based rights group B’Tselem said, “the state is fully aware that the suggestion is neither adequate nor feasible. The proposed site is completely barren and contains no pasture land, so that residents would not be able to continue shepherding, losing their main source of income. It is also far from the hubs that residents of Khan al-Ahmar and the other three communities rely on for additional work, educational and health services and social ties. In addition, the site is only several hundred meters away from a sewage treatment facility (a detail that the state failed to mention in its response).”

After initially arguing in the court that the villagers were not entitled to file a petition because the court had already made its decision in May, the state began making attempts to use these same petitions to evict three more communities. Meanwhile, the court dismissed all the petitions and cleared the state’s way to continue with the demolition.

Earlier in July, a number of structures of the Bedouin community in two other villages close to the illegal Jewish settlement of Ma’ale Adumim were demolished, leaving 64 homeless. Alon and Nofei Prat are the other two settlements in the region which have seen ceaseless expansion, systematically eliminating Palestinian presence in the narrowest strip in the middle of West Bank to the east of Jerusalem.

Khan al-Ahmar, located between the Ma’ale Adumim settlement and the Kfar Adumim settlement, is one of the few villages in this strategically important strip that still has a Palestinian presence.

Demolishing this village, and the subsequent expansion of the Kfar Adumim settlement will be a major step towards successfully isolating Jerusalem from the rest of the West Bank by surrounding it with Jewish settlements.

But the underlying motive is not limited to isolating Jerusalem. Expanding the Kfar Adumim settlement into the village of Khan al-Ahmar is also one of the final few measures that needs to be taken by the Israeli state to realize the agenda it set out to achieve in the 1970s. As enunciated by Uri Ariel, the founder of the settlement and now the Minister of Agriculture and Rural Development, this involved creating “a Jewish corridor from the sea, through Jerusalem, to the Jordan river, which will put a wedge in the territorial continuity of Arab inhabitation between Judea and Samaria (West Bank).”

Thus, the splitting of the West Bank through the setting up of a strip of Jewish settlements will effectively render the two-state solution an impossibility.

Therefore, this decision to eliminate Palestinian presence in Area C is of no less importance than the shift of the US embassy to Jerusalem, said Eid Khamis, the spokesperson of the Bedouin community in Khan al-Ahmar.

On September 4, UN Mideast envoy Nickolay Mladenov said the demolition of this village would “undermine the prospect for [a] two-state solution and is against international law.”

The following day, after the Supreme Court dismissed all the petitions seeking relief from demolition, B’Tselem’s director, Hagai El-Ad, accusing the Israeli Supreme Court of working for the occupation instead of upholding justice, said, “This is yet another example where we can see that the occupied people cannot find justice in the courts of the occupiers.”

“This illegal decision uncovers the colonial DNA of Israel’s institutions that work to confiscate Palestinian lands … effectively alienating it from the West Bank and killing any hopes for a future contiguous Palestinian state,” the Palestinian Authority said in a statement.

Minister of foreign affairs of Palestine, Reyad al-Malki, said a day after the court’s decision that Palestine “will ask for an emergency meeting for the Security Council to discuss the issue.. In case the United States vetoes the bid, we will apply to the UN General Assembly.”

“The consequences of a demolition of this community and the displacement of its residents.. would severely threaten the viability of the two-state solution and undermine prospects for peace,” the EU said in a statement, calling upon the Israeli state to “reconsider their decision to demolish Khan al-Ahmar.”