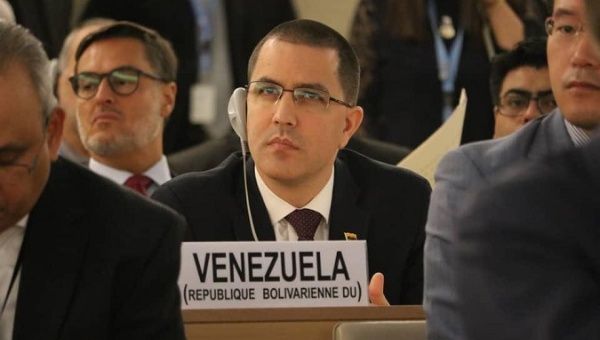 Venezuela has denounced and demanded an end to the aggression by the US government, the European Union and their allies against the homeland of Bolivar, reported Agencia Venezolana de Noticias, the national news agency of Venezuela. This stern rebuke was delivered at the 39th session of the Human Rights Council of the United Nations (UN) on September 10.

In his speech, the minister cited the report by the independent expert of the UN, Alfred de Zayas, who pointed out that in Venezuela, there was no humanitarian crisis. The report went on to add that the economic crisis prevalent in the country was fundamentally the result of unilateral coercive sanctions by both the United States and the European Union.

“The recommendations given by Alfred de Zayas even suggest that the International Criminal Court (ICC) should consider such sanctions as crimes against humanity and the International Court of Justice should take a stance [on the issue] and [necessary] action”, pointed out Arreaza.

The Venezuelan diplomat emphasized that there were agents interested in using the issue of human rights to intervene in the country. These agents were “trying to sow the seed of humanitarian crisis in Venezuela with the aim of promoting a multilateral and international intervention, violating its sovereignty”.

Arreaza said the US government had no moral stand to impose sanctions and that the actions that it had taken against Venezuela violated international norms and sought “to force a change of regime,” with president Donald Trump even threatening military action.

He noted that these threats had been confirmed by reports in the US media last week, in addition to, “spokespersons of US government who have spoken of the plans to intervene in Venezuela, to promote a military coup, to disturb our democracy, and even [mentioned] military intervention in Venezuela”.

On September 8, the New York Times confirmed that the administration of Donald Trump had held secret meetings with Venezuelan military personnel to discuss plans to overthrow Nicolás Maduro. The article titled ‘Trump Administration Discussed Coup Plans With Rebel Venezuelan Officers’ and written by Ernesto Londoño and Nicholas Casey is based on information given by American officials and “a former Venezuelan military commander who participated in the talks”.

The article reveals a number of facts about the Trump government’s meddling in the affairs of Venezuela. A day after the news came out, Arreaza condemned the US interventions. “Venezuela reiterates its denunciation and condemns the continuous aggressions that the US government has directly promoted against the Constitutional President @NicolasMaduro, democratically elected and re-elected by a wide electoral margin in May this same year”, he tweeted. In another tweet, he wrote that “the Venezuelan homeland is sovereign and independent, has a solid democracy and people’s revolution that is respected by all means and will always reject all forms of interventionism and interference in the internal affairs of the people of the world”.

Arreaza also noted that Zayas’ report stressed that human rights were becoming a weapon against enemies, even though they constitute the legacy of every human being and should never be used as weapons of demonization.

“Zayas’ report acknowledges the artificial manipulations of the international price of oil, the attack on the Venezuelan currency, the smuggling of goods and the unilateral coercive measures of the United States and the European Union,” said the foreign minister.

During his visit to Venezuela between November and December 2017, Zayas was able to see first hand the model of guaranteeing human rights in Venezuela, said Arreaza, who noted that the UN expert said that he had observed the eradication of illiteracy, free education from primary school to university, poverty reduction programs and provision of housing to vulnerable and homeless people.

The minister pointed out that the Human Rights Council of the UN has recognized that unilateral punitive measures are contrary to international law, the charter of United Nations and the rules and principles governing peaceful relations between states.

“Similarly, it has also recognized how these unilateral coercive measures complicate, hinder and impede the full enjoyment of human rights” he added.

Arreaza emphasized that Venezuela once again ratified its commitment to the universal human rights system. “We ratify our desires of cooperation, both with the office of the High Commissioner for Human Rights, as well as with our leading role in this Human Rights Council”, he noted.