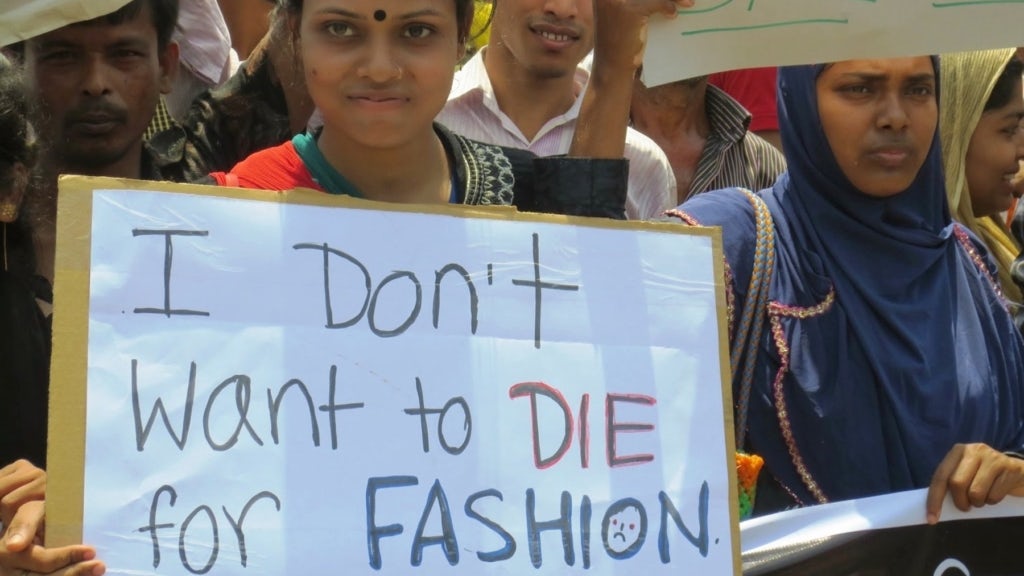 Bangladeshi garment industry workers staged a massive sit-in in front of the National Press Club in the country’s capital city of Dhaka on Friday, protesting the government’s newly proposed minimum wages, which are half of what the workers have been demanding. The protests were led by the Garments Workers’ Trade Union Centre (GWTUC), the largest national trade union in the sector, which has more than 20 factory-level trade unions affiliated to it.

Mujibul Haque, the minister for labor, announced on Thursday that the government would fix the minimum wage for readymade garment (RMG) factory workers at Tk 8,000 ($95), an increase of 51% from the previously fixed wage of Tk 5,300 ($65). The new wages will be enforced in December with the issue of a gazette notification. Calling the raise a cruel joke, trade union leaders said the workers had been demanding that the wages be fixed at a minimum of Tk 16,000 ($190).

Speaking to Peoples Dispatch, Hasan Tariq, a labor lawyer and central committee member of the Communist Party of Bangladesh, said, “Most of the RMG workers live in the capital city, where the cost of living is very high. A family of four will require a two-room house to live in. In the city’s slum areas, the rent of a house of that size is at least Tk 8,000. How can they survive with such low wages?”

The RMG industry forms the backbone of Bangladesh’s economy, employing more than 4 million workers in 5,000-7,000 factories. In the fiscal year 2017-2018, the industry contributed $30.6 billion to the country’s export earnings, which is more than 83% of its total export earnings. Second only to China, Bangladesh is the largest exporter of readymade garments. Some of the biggest buyers are top European and north American retailers, including brands such as H&M, Walmart, Gap and Tesco.

It is the rights of these workers, bringing in crucial revenue to the nation’s economy, that are being threatened with the newly proposed wages. The poor working conditions of Bangladesh’s garment workers have been widely documented with the low wages regularly compelling them to work overtime in unsafe environments. More than 85% of the workforce comprises women, who have to work in the absence of basic amenities and without the proper enforcement of laws granting maternity leave and benefits. The 2013 Rana Plaza factory collapse is often cited as one of the worst industrial accidents, claiming 1,100 lives and injuring more than double the number. The last time there was a hike in the workers’ salaries was in the aftermath of that incident.

Factory owners have refused the workers’ demands of higher wages, citing issues in the quality of production and non-performance of workers. Noting that the nexus of garment factory owners and the government was the reason for the the inadequate hike, Tariq said,  “With this hike, the government is only trying to satisfy the factory owners. The Bangladesh Garment Manufacturers and Exporters Association (BGMEA) is an association of factory owners whose members basically constitute the ruling class.

“This association has a strong influence on the government, with many members also being members of parliament, serving as ministers, and playing key roles in policymaking,” he added.

Within the newly fixed wage of Tk 8,000, the basic salary is only Tk 4,100 ($49). According to a leader of Bangladesh Garments Labour Liberation movement Shamim Imam, provisions in wage board rules anyway mandate a 5% annual increment in the basic salary, after which it would automatically come to Tk 3,828 in five years, after the last hike in 2013. This means the actual increase in the basic salary after five years would only amount to Tk 372, or around $5. “It’s a cruel joke on us,” said Imam.

The wages fixed for garment industry workers are much lower than their counterparts in other sectors. A Bangladesh government employee’s minimum salary is Tk 15,250, almost double that of the newly fixed wages for RMG workers.

The last major protests demanding salary hikes occurred in late 2016, resulting in heavy repressive measures undertaken by the state. More than 1,500 workers lost their jobs for participating in the demonstrations. In the coming days, trade unions are planning to engage in talks with government officials for reconsidering this decision, and more serious action if that fails.