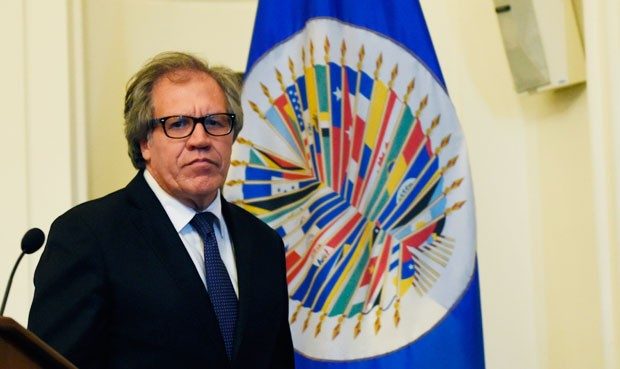 At the end of a visit to Colombia on Friday, September 14, Luis Almagro, the secretary general of the Organization of American States (OAS), said a military intervention should not be ruled out “to overthrow the regime of Nicolás Maduro”. Although he said that “diplomatic actions are the first choice,” he argued that other options cannot be ruled out, following the crisis in the Bolivarian country.

In the light of this, on Saturday, the vice-president of Venezuela, Delcy Rodríguez, said that Caracas would denounce Almagro to the United Nations and other international organizations for the constant promotion of interventionist measures against the Latin American nation.

The Bolivarian Alliance for the People of Our America-Peoples’ Trade Treaty ALBA-TCP issued a communique rejecting Luis Almagro’s statement.

“The executive secretariat of the (ALBA-TCP) expresses its indignation and rejects the statements made by the secretary-general of the Organization of American States (OAS), Luis Almagro, in which he incites a military intervention in the Bolivarian Republic of Venezuela,” said the communiqué of the Alliance, published on Saturday by Venezuelan foreign minister Jorge Arreaza on his Twitter account.

The ALBA-TCP member countries warned that “a military intervention against Venezuelan democracy and sovereignty would have unpredictable consequences for our countries and would generate an immediate reaction from our people for the defense of Our America”.

The statements by the Uruguayan diplomat, according to the communique, also went against the democracy of “the progressive governments of the region” and demonstrated the intentions/efforts of the OAS to destabilize Latin American countries.

According to ALBA-TCP, Almagro’s aim was “to deepen and sharpen the attacks that certain governments of the region have recently developed against Caracas.”

Almagro’s statements were even rejected in a communique signed by 11 of the 14 member countries of the Lima Group, a group of conservative Latin American countries that was created in August 2017 and is widely considered a vehicle to advance US interests and increase regional pressure on the Bolivarian Republic.

The president of Bolivia, Evo Morales, stated on Twitter: “The Lima Group rejected military intervention against #Venezuela and left Luis Almagro, servile imperial agent, alone with his coup obsession. It is a defeat of the interventionism of Trump and a victory of the dignity and courage of the Venezuelan and Latin American people”.