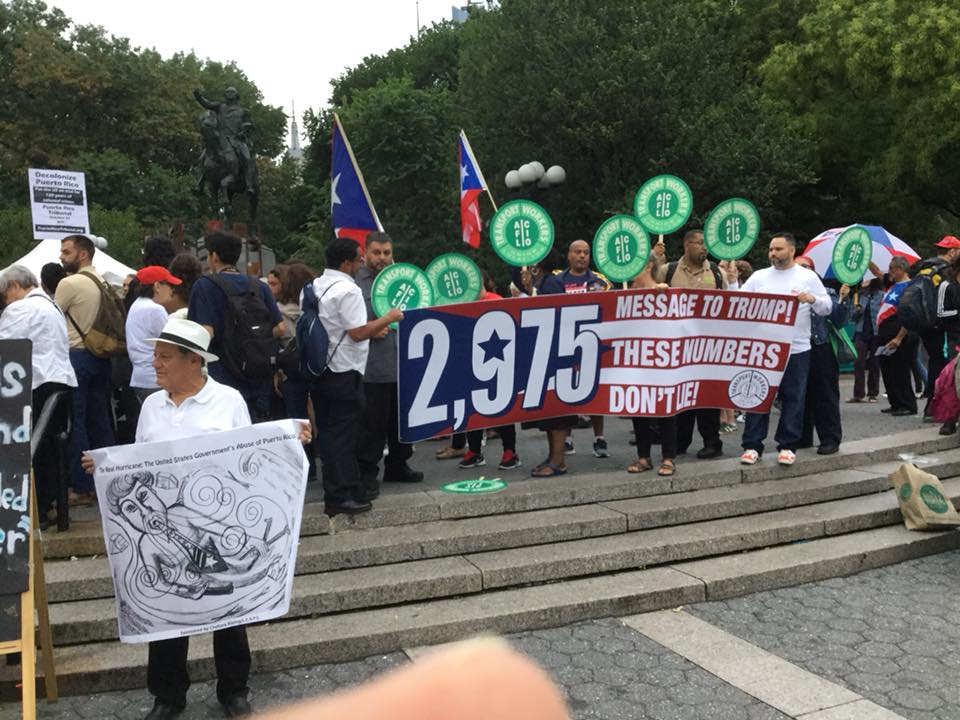 The Committee in Solidarity with the Students and Teachers of Puerto Rico had organised a protest gathering and a Puerto Rico Solidarity rally in Union Square in New York City on September 20 to mark the Hurricane Maria tragedy that had hit Puerto Rico and devastated lives and livelihoods in the entire island. People have used several banners showing the death toll of 2975 and posters saying ‘these numbers don’t lie’. They accused that the Donald Trump-led US administration and Republican Party led US Congress had maintained a criminal neglect towards Puerto Rico. Many argue that this can be understood by the fact that the official estimates by the US government put the death toll at 64, while detailed household surveys by reputed organisations have estimated fatalities in the several thousand.

The protesters demanding an end to the colonial attitude of US administration called for an effective full fledge relief and rehabilitation package from the federal government. The US had been accused of aggravating the death and destruction related to Hurricane by imposing austerity measures on Puerto Rico and delaying delivery of essential supplies.

Puerto Rico in the Caribbean Sea is mostly Spanish speaking which is governed by the US as an unincorporated territory since 1898. It is a commonwealth in association with the United States where US President is the Chief of State and an elected governor is the head of the state. Hurricane Maria was a category-4 intense storm with 155 mph speed made landfall in Puerto Rico in September 2017 and devastated the entire island causing losses worth 100 billion USD.

In an earlier interview to Peoples Dispatch, Jocelyn Velazquez Rodriguez, spokesperson of Jornada Se Acabaron Las Promesas said that “the US government has been an obstacle to our recuperation completely. For weeks, they blocked the arrival of supplies, they took control of the entire health and security apparatus, they have basically served to slow down the process of recovery, denying to citizens the aid which they rightfully should receive.”

According to the estimates of a study conducted by George Washington University (GWU); around 3000 people lost lives in the landfall of Hurricane Maria. Another study by researchers affiliated with various Harvard centres concludes that the death toll may exceed the GWU estimates. A large number of deaths was related to post Hurricane due to its failing health system and poor

On August 28, 2018, the government of Puerto Rico had officially declared that 2975 people got killed in the aftermath of the storm by incorporating the details of the survey conducted by George Washington University (GWU) on behest of Puerto Rico governor. According to studies, including the GWU and Harvard surveys the death toll was so high because as along with people got killed in rising water and flying debris during the storm, thousands got killed due to prolonged deprivation from supplies.

A survey conducted by researchers of Harvard Medical School and TH Chan School of Public Health finds that many of the households they surveyed were 41 days without cell phone connectivity, 68 days without water and 80 days without electricity. Medical facilities were also deeply affected.  Electricity supply in the island was seriously hampered as the electronic grid was destroyed in the storm and it took a month to repair back the grid to normalcy. There was also criticism that most of the federal aid to Puerto Rico was slow in its outreach. Around 2,00000 people had reportedly fled to adjacent US mainland territory of Florida and there was criticism that the government is showing discriminatory tendencies as it hasn’t provided Transitional Shelter Assistance (TSA) for adequate time for Puerto Rican people went to Florida during floods.

Amidst criticisms of neglect, the Puerto Rico governor Ricardo Rossello had requested the US President Donald Trump to grant full statehood to Puerto Rico; a request from the Legislative Assembly of Puerto Rico pending since 2012. According to the governor; the lack of statehood is creating a lot of impediments in the reception and disbursal of federal aid for the reconstruction of Puerto Rico. Several referendums on the status of Puerto Rico indicated that the Islanders are unhappy with their current status. A large section had voted in such referendums for full statehood and a section had also demanded independence from US.

The destruction caused by two consecutive storms last year and the austerity measures imposed on the Islanders by the US had put the civilian life of Puerto Rico in peril. The US Congress has passed the Puerto Rico Oversight, Management and Economic Stability Act (PROMESA) in 2016 and created a Fiscal Control Board (FCB) which had effectively reduced the pension benefits, increased the tuition fees in the universities, curtailed several labour rights and tends to privatise Electrical  Energy Authority. In Puerto Rico, many people consider FCB as a colonial body through which the federal government of US overrules the decisions of the Puerto Rican legislature. For them, FCB is a mechanism that treats Puerto Rico as an anomaly by denying effective sovereignty or statehood.

“Yes, we are a colony of the United States, and right now we have a debt crisis, for which there is a Fiscal Control Board that forces us to pay this debt through all possible methods,” noted Jesef Reyes Morales, who is part of the Movimiento de Agroecología Popular (Movement for People’s Agroecology) while speaking to Peoples Dispatch in July this year.

“These include cutting the education and health budgets, exploiting our natural resources, and privatization in various areas,” added Morales.

There are also criticisms that US has made cuts worth USD 10 billion from Federal Emergency Management Agency (FEMA) budgets despite looming threat from another Hurricane Florence in its eastern coast.