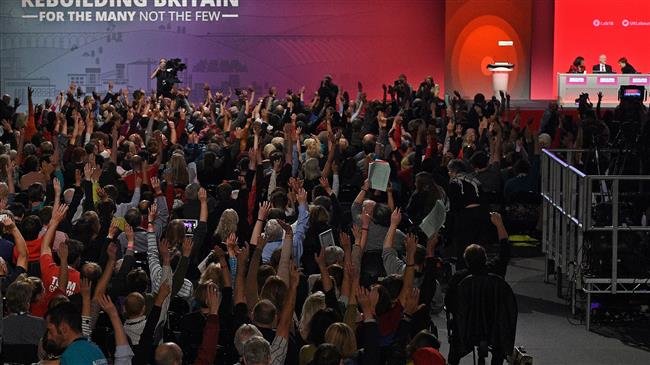 Over a period of five years between 2013 and 2017, Israel has imported over 460 million dollars worth of military hardware from the UK. Photo: AFP

Shrugging off allegations of anti-semitism, the Labour party, under the leadership of long-time Palestine supporter Jeremy Corbyn, voted in favour of banning UK’s arms sales to the apartheid state of Israel at a conference in Liverpool on September 25.

Should the Labour party win the next general election in 2022 and implement the resolution, the UK will stop being an arms supplier to Israel. The latter is currently the eighth largest buyer of British weapons.

While the motion was being debated, hundreds of party delegates stood up and waved Palestinian flags, handed out by the Palestine Solidarity Campaign, and raised the slogan “Free Palestine!”.

This debate was the fourth of the issues discussed in the conference, and drew more votes than did the debates on issues of Brexit and the National Health Service (NHS). The resolution passed after the debate recognized that “the majority of Palestinian people were forcibly displaced from their homes” on their ancestral land over which the state of Israel was established.

Apart from “a freeze of UK Government arms sales to Israel”, the motion also called for an “immediate and unconditional end to the illegal blockade and closure of Gaza”.

Noting that over half of Palestinian protesters killed or injured since the beginning of the Great Return March on March 30 were hit by live bullets fired by Israeli snipers, the motion also called for an “independent international investigation into Israel’s use of force against Palestinian demonstrators.” As many as 180 people were killed and thousands injured for demanding their right to return to their ancestral land from where they were displaced – a right stipulated in the UN general assembly’s resolution 194.

The motion was proposed by a staunch supporter of Corbyn’s leadership, Colin Monehen, who said in his speech, “I want us to say this to every Palestinian: We have heard you calling from the darkness and we cannot and we will not ignore you or your tragedy.”

Slamming US president Donald Trump for defunding the United Nations Relief and Works Agency for Palestine Refugees, Monehen added “I want us to send a message to Mr. Trump that cutting the funding to UNRWA, the humanitarian agency set up by the UN to assist these people in exile, born homeless, born stateless, in refugee camps, will not crush their spirit. It will not lessen their resolve to return home.”

Commending this unprecedented act of Labour, the director of Palestine Solidarity Campaign, Ben Jamal said, “This incredible show of support and this historic motion demonstrate the strength of feeling at the grassroots of the party. Labour members want to show real solidarity with Palestinians.”