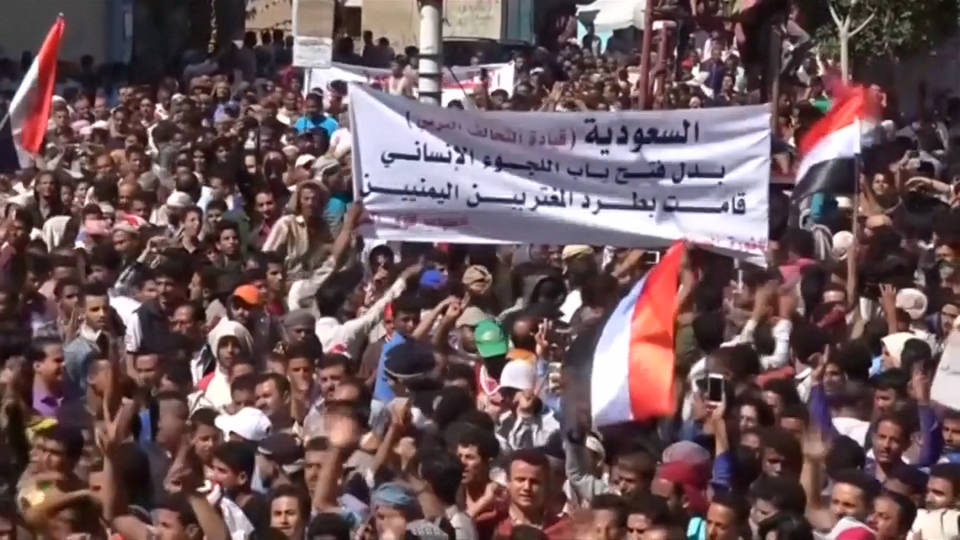 According to UN estimates, almost 22.3 million of the 30 million people in the country are dependent on aid. Photo: Democracy Now

Tens of thousands of Yemenis in Taiz took part in large demonstrations and protests against the government and the US-supported, Saudi-led coalition’s military intervention in the country. They were protesting the dire and deteriorating living and economic conditions, and the steep increase in prices of essential goods and commodities as a result of the government’s inefficiency, the Middle East Eye reported last week.

According to United Nations (UN) estimates, approximately 22.3 million people out of Yemen’s total population of 30 million are dependent on aid, with at least 8.4 million of them on the brink of starvation. The poorest country in the Arab world has also been reeling under a cholera epidemic since 2016 with 1.1 million suspected cases and 2,266 Yemenis losing their lives as a result. The Saudi-led coalition has bombed health, water and sanitation infrastructure, and medical facilities in Yemen regularly, worsening the medical and humanitarian crisis significantly.

Thousands of Yemenis have been killed in Saudi coalition bombings, which have also targeted schools, hospitals, markets and civilian residential areas. According to the UN estimates, more than 10,000 people have been killed, 55,000 injured and more than 3 million displaced. This has led the UN to call the situation in Yemen the world’s worst humanitarian crisis.

Democracy Now reported that as the protests were taking place, the head of a team of UN investigators, Kamel Jendoubi, accused Saudi Arabia and the United Arab Emirates (UAE) of interference in their investigation. He went on to say that all parties in the Yemen conflict have committed human rights abuses, accusing the US-backed Saudi-led coalition of multiple war crimes, such as widespread arbitrary detention, rape, torture, and conscription of children, some as young as 8 years old.

In another part the country, another protest was undertaken, this time against the Houthis by women and students who were protesting against the poverty and hunger, the Middle East Eye reported on Sunday. The Houthis had warned people not to take part in the protest as they were planning a mass armed mobilization in various parts of the city, including the location the protesters were gathering in. While some reports said 55 students, including 18 women from Sanaa university, were arrested, other said 9 women in total were arrested from among the less than 20 who took part.

Yemen has been caught up in a deadly, long drawn conflict and bloody civil war since 2015 when Saudi Arabia and its Gulf allies intervened militarily on behalf of the government of Abd Rabbuh Mansour Hadi against the Houthis, a rebel group that had taken over large parts of the country, including the capital Sanaa.