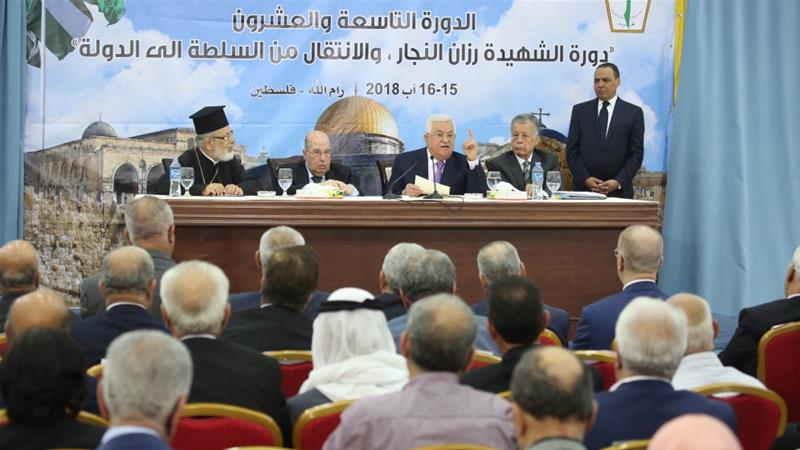 recommended that the suspensions and revocations stay intact until Israel recognized the Palestinian state based on pre-1967 borders with East Jerusalem as its capital.

The Palestinian Central Council (PCC), a top body of the Palestinian Liberation Organisation (PLO), on October 28 announced that it had voted to suspend Palestinian recognition of Israel and end the Palestinian Authority’s (PA) security coordination with Israel. This decision also includes all the trade agreements signed between the PA and Israel.

The decision was taken in Ramallah over two days. All economic agreements under the 1994 Paris Economic Protocol were declared suspended. It was also decided that the validity of the Oslo Accords would be revoked.

The PCC further recommended that the suspensions and revocations stay intact until Israel recognized the Palestinian state based on pre-1967 borders with East Jerusalem as its capital. Additionally, the council denounced the US peace plan being pursued by president Donald Trump. The council declared that the US government was complicit in the Israeli occupation, and termed it as “a part of the problem, not the solution.

The council also criticized Hamas for not fulfilling the terms of the unity agreement signed in  October last year.

It must be noted that the PCC’s decisions are not binding. The PCC plays only an advisory role to the PA on policy decisions, and these decisions must be approved by the PLO executive council and by president Abbas before they are implemented. The PCC had previously in 2015 called for ending security cooperation with Israel.

President Abbas, while speaking at the meeting, said that he would block any peace plan proposed by president Trump.

The PCC also said that any ceasefire must be based on the agreement signed between the PLO and Israel that was mediated by Egypt in Cairo in the aftermath of the Israeli invasion and the massacre of Gaza in 2014.

Just prior to the Ramallah meeting, the Gaza-based militant group Islamic Jihad had said it would stop firing rockets at Israel after taking part in Egypt-mediated talks for a truce, as reported by Al Jazeera. This was following over 80 airstrikes on Gaza  in response to the rockets which had not caused any casualties.

In return for Hamas agreeing to an end to the launch of incendiary balloons, explosive-laden kites etc by Palestinian protesters on the border fence, Israel agreed to relax some of its restrictions on its blockade of the Gaza Strip. Israel also agreed to expand the fishing zone off the Gaza coast and to allow supply of diesel to the power plant in Gaza. However, along with the airstrikes on Gaza, Israel yet again closed two border crossings that supply food and allow for transport of injured people from Gaza.