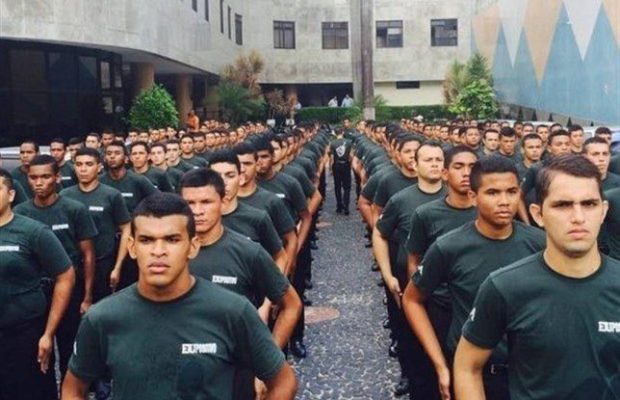 Units of the Gladiators of the Altar have been set up in churches in many countries in Latin America.

A three-year-old video of the formation of the ‘Gladiators of the Altar,’ a controversial project of the Universal Church of the Kingdom of God in Brazil and Argentina, is again going viral on social media in Argentina. In the context of the advance of the right wing across the continent, the re-circulation of this video should not be overlooked. This also gains added significance as the Universal Church played a significant role in the victory of Jair Bolsonaro in the recent presidential elections in Brazil.

The Universal Church of the Kingdom of God is a powerful religious and financial organization with strong roots in Brazil. It is a neo-Pentecostal church with a global reach. It finances small businesses for its members and provides them with job opportunities. The organization has been continuously accused of illegal activities and corruption and of exploiting the faith of the poor. It also has a powerful base in Argentina, with its headquarters on Corrientes Avenue and multiple subsidiaries throughout the country, especially in poor neighborhoods.

Gladiators of the Altar was launched in January, 2015. It is a religious group with a pronounced military aesthetic. Its uniformed young ‘soldiers’ have been seen marching in rows and chanting slogans in a lively voice. Its fascistic tendencies were highly criticized by various sections of society and activists even then. Jean Wyllys, a Brazilian politician, journalist, LGBTQ activist and lecturer, in a public statement called it a Christian fundamentalist army and said such groups threatened individual freedoms, including those of sexuality and religion.

Faced with a growing controversy, the Universal Church released an official statement denying such allegations. The church said it was promoting meetings of a religious nature and “no military or similar practices” were carried out at these events. However, soon after the statement, numerous videos that had been uploaded on the internet in which young men could be seen making gestures very similar to Nazi salutes, disappeared.

The Universal Church has been forming units of the Gladiators of the Altar for years in its temples in Brazil, Argentina, Colombia, Peru and other Latin American countries. The re-circulation of the videos in which a youth army of disciplined and indoctrinated adolescents and young men committed to “defend God and make hell tremble”, calling itself “the army of pastor’s warriors” prepared to “fight the demon,” is alarming and indicates a greater malice.

Given the current social and political scenario in Argentina under president Mauricio Macri’s government, it is time for all the social, LGBTQ and feminist organizations to reunite and prepare to fight the challenge posed by the expansion of this conservative and extremist group in Argentina.