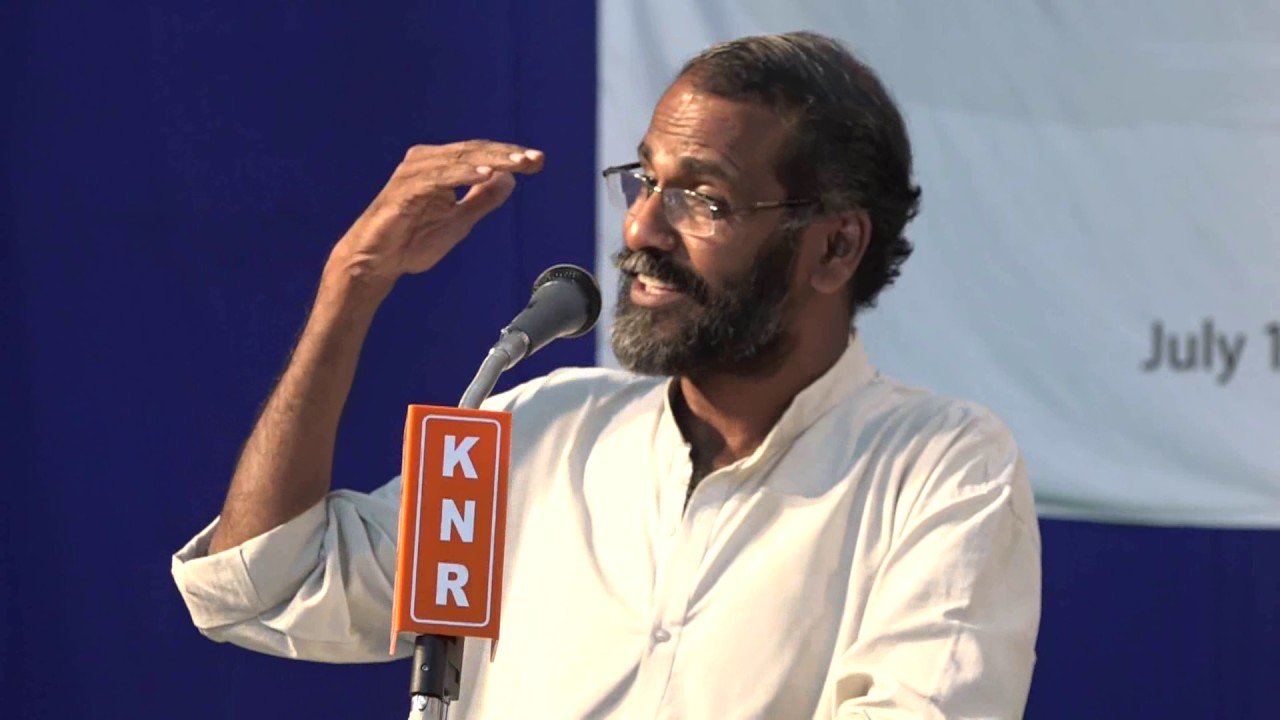 Sunil P. Elayidom has faced death threats on social media for his stand in support of the entry of women of all ages to the Sabarimala temple.

Over the past few weeks, right wing forces in the south Indian State of Kerala have been aggressively attempting to spread religious discord. This is in the aftermath of a historic supreme court verdict that permitted the entry of women of all ages into Sabarimala, a famous temple in the State. The latest instance of such criminal activity was the attack on the office of Dr. Sunil P. Elayidom, radical scholar, critic, orator and professor at Sree Sankaracharya University of Sanskrit. His office was reportedly vandalized on Wednesday night.

Dr. Elayidom is a staunch advocate of the implementation of the supreme court verdict on the entry of women into the temple. He also received death threats on social media for his stand on the issue. A few weeks ago, the ashram (monastery) of another supporter of the verdict, Sandeepananda Giri, was attacked in the capital, Thiruvananthapuram. Right-wing forces also threatened and attacked the houses of a number of women who had attempted to enter the temple.

Entry to the Sabarimala temple was, for at least the past 40-odd years, entirely barred to women between the ages of 10 and 50 on the grounds that the deity, Ayyappa, was a celibate. The presence of women of a menstruating age, religious authorities claimed, would pollute the temple premises. However, on September 28, the supreme court, hearing a plea filed 12 years ago, dismissed all such arguments. The court held that the practice of barring women from visiting the temple violated their fundamental rights to equality and freedom to practice religion.

Ever since the verdict, Kerala has been witnessing heated debates between conservative and secular-progressive sections of civil society. The Left Democratic Front State government, led by the Communist Party of India (Marxist), made it clear that it would implement the court’s verdict. Meanwhile, orthodox and reactionary groups, led by the right-wing Bharatiya Janata Party (BJP, which is in power at the center), and the main opposition Indian National Congress (INC), initiated a large-scale mobilization against the verdict. They were also joined by certain caste groups, the priests of the temple, the erstwhile royal family of the region, and Hindu fundamentalist groups.

These reactionary groups raised the bogey of the Hindu religion being under threat due to the supreme court verdict. Kerala, which boasts of a history of social reform movements and a powerful communist presence, is one of the few States where the right-wing BJP has not managed to emerge as a powerful force.

The BJP and its allies saw the verdict as a golden opportunity to spread discord and in the process, create a base for the party. On two occasions after the verdict, when the temple was briefly opened for rituals, many attempts were made to perpetrate violence. Groups of ‘devotees’ attempted to block and prevent women from approaching the temple. Even a few journalists were attacked during the process.

There was also a massive dissemination of fake news, causing a lot of confusion and angst to people in the State. For instance, the death of a devotee, which was completely unconnected to the issue, was portrayed to be the result of police action. A few days ago, a video emerged in which the BJP State president called the issue “a golden opportunity for the party”. He went on to narrate how the party and its leaders had been involved in planning these ‘spontaneous’ agitations. A key organizer of these protests bragged on television about how they had planned to spill blood on the premises and pollute the temple if women were allowed to enter.

However, the communist government of Kerala responded to these provocations calmly and effectively. The police promptly arrested thousands of anti-social elements who were spreading hatred across the State and attacking women who were on the way to the temple.

The LDF and the CPI(M) also launched grassroots campaigns to approach the people on this issue. Chief minister Pinarayi Vijayan spoke at several large rallies in which he reiterated the government’s commitment to implementing the supreme court verdict. He also cited instances from Kerala’s social renaissance from over a century ago, when reformers such as Sri Narayana Guru and Ayyankali fought against social backwardness, obscurantism and casteist oppression. Drawing a direct parallel to contemporary developments, Vijayan pointed out how these leaders had taught people that some rituals were meant to be violated. “We will not allow the blunders of yesterday to become the rituals of today and the science of tomorrow,” he said at a rally, to resounding cheers. The leftist government, the CPI(M) and progressive sections of society thus addressed this issue, both as a legal one stemming from the supreme verdict, and as a political and social one that posed key questions to Kerala as a whole.

Meanwhile, the temple priest and the erstwhile royal family, among others, approached the supreme court, seeking a review of the verdict. The court agreed to hear the review petitions in detail in January but refused to stay the verdict of September. In the wake of this, the standoff between the government and right-wing forces escalated on November 15, with the Chief Minister making it clear that the verdict would be continue to be implemented.

It is in this context that the attacks on scholars and activists like Elayidom must be seen. Since the victory of the BJP led by prime minister Narendra Modi in the national elections in 2014, there has been a massive increase in hate crimes, lynchings and intolerance. Social activists, journalists and writers have been attacked and killed, and secular spaces in universities and other public institutions have been repeatedly assaulted. Members of minority religious communities and the ‘lower’ castes have been especially targeted. The violence and the hate spread after the Sabarimala verdict and the attack on scholars like Elayidom are an attempt at generating a similar situation in Kerala too.

Just a few months ago, Kerala saw a massive popular mobilization for relief work in the wake of disastrous floods. Despite lack of support from the central government, the people of the State, led by a proactive government, were able to get back on their feet quickly through collective effort. The right wing’s attempt has been to destroy the transformative possibilities of such efforts by spreading hate, misogyny and casteism. The progressive sections of Kerala have a fight ahead in uncovering and fighting these tendencies and working for a truly inclusive society. For Elayidom and others like him, the battle lines are drawn. As he said, while speaking to the Indian Cultural Forum, ”But I cannot be threatened or silenced because right now our country is witnessing a different scenario altogether. The more they attack us, the more we will resist.”

(Read a dossier by Tricontinental: Institute for Social Research on how the people of Kerala worked together to weather the challenge posed by the heaviest floods in a century)