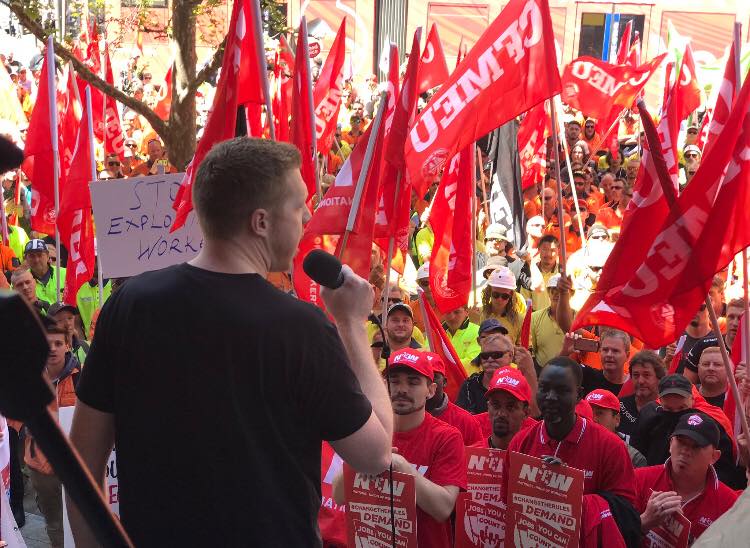 Over 20 rallies were held over the past month and a few more are scheduled in the coming days.

Over the past month, tens of thousands of workers in Australia, under the leadership of Australian Council of Trade Unions (ACTU), have taken part in 20 rallies across the country as part of the council’s ‘Change the Rules’ campaign against the center-right coalition government of the Liberal Party and National Party. Some of the key demands of the workers are: an increase in the minimum wage, a complete overhaul of labor hire policies, an end to the uncapped temporary working visa system, laws for safe and secure workplaces, job security in casual employment and funding for schools, Technical and Further Education (TAFE) and universities.

On October 18, around 4,000 workers participated in the inaugural rally of this campaign in Perth. Since then, rallies were held in major cities like Melbourne, Sydney and Adelaide, as well in several other centers across the country. Major rallies are also scheduled in Brisbane and Canberra on November 20. More than 1,50,000 workers participated in the rally in Melbourne. Victoria State premier Daniel Andrews of the Labor Party took part in that rally, a gesture welcomed by workers but criticized by the Liberal Party.

ACTU’s statement of October 22 explained the context of the rallies and the campaign. “Wage growth is at near record lows, with four out of five working people not getting pay rises that keep up with the cost of living. The current Australian minimum wage is not a living wage, and is no longer keeping people out of poverty. Tomorrow, more than 28,000 people are homeless but working full-time. Forty percent of working people are in insecure work – either in casual work, dependent on contracting, in labor hire, getting too few hours, or in the gig economy. We need to change the rules so working people get a fair go, fair pay rises, and jobs they can count on. Working people need the tools and power to win fair pay rises. This includes making our bargaining system fair, increasing the minimum wage to a living wage, ensuring award minimums improve over time, restoring penalty rates, ending wage theft and [ensuring] secure and equal pay for women”.

In Australia, the number of fatalities in workplaces has spiked in recent years. In the wake of this, unions have been consistently demanding laws to ensure safety at workplaces. They also want authorities to limit and define insecure casual jobs.

The rallies have raised the hackles of major industrial groups in Australia. Responding to these groups, Leigh Shears, president of the Hunters Workers Union and organizer of the rally in New Castle, said, “Under the Fair Work Act, employees have a right not to be discriminated against because of their political opinion. Employers cannot unreasonably refuse to allow employees to take leave. The right to protest is a fundamental tenet of a democratic society.”

The Communist Party of Australia (CPA) called for a change in the system, not just the rules. In their statement, CPA supported the ACTU campaign and called on the workers of the country to support and attend the ACTU rallies.