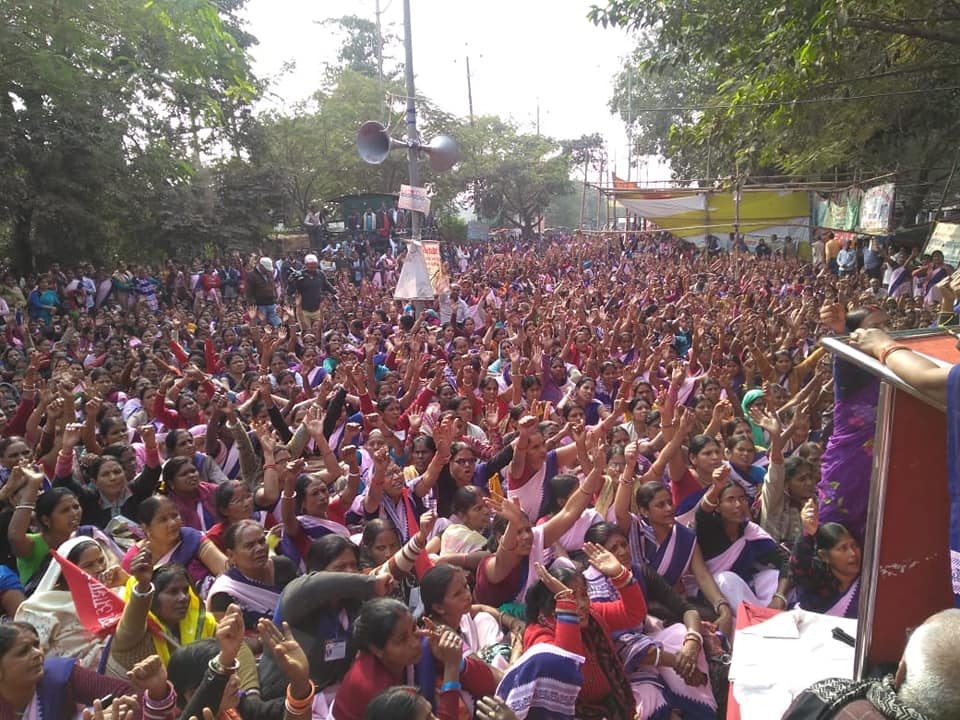 Communist parties in the Indian state of Bihar declared their support for the indefinite strike announced by ASHA (Accredited Social Health Activist) workers for an increase in wages, better working conditions and welfare provisions. “Patna and Delhi, open your ears and listen, ASHA workers must be paid monthly honorarium”, raising this slogan, nearly one lakh ASHA workers under the banner of  ASHA Sanyukt Sangharsh Manch- a joint platform of various unions and associations- are on an indefinite strike since December 1.

“ASHA workers in Bihar are not even receiving 1,000 rupees (13.9 USD). The salary hike was supposed to be implemented from October. It is now December and the workers are yet to receive any money. Moreover, the workers have also not received insurance coverage”, Shashi Yadav, the Bihar president of the ASHA Workers’ Union told Peoples Dispatch.

ASHA workers are trained female health activists selected from within the village community. Introduced by the National Rural Health Mission, ASHA workers act as key intermediaries between the village community and the public health system. ASHA workers perform a range of tasks which include community health planning, referral and escort services for Reproductive and Child Health, information dissemination related to sanitation, nutrition, etc., preventive and curative care, and prenatal and postnatal care in terms of immunisation and counselling, among others. These varied responsibilities form a combined total of approximately 43 tasks.

Bina Kumari, an ASHA Facilitator, who has been employed under the scheme since 2011, spoke with Peoples Dispatch and said that “in the absence of regular monthly payments, the workers are paid on a task-by-task basis. Thus, not only are payments made in increments, but the amounts received in the bank account are only 25-30 percent of the actual amount that is due. A lot of the work is done is not even registered. ”

According to the way in which the current remuneration structure is set up, ASHA workers are given incentives on the basis of tasks performed. Apart from these incentives, ASHA workers are to be provided a monthly honorarium. Shashi Yadav claims that not only are ASHA workers not paid monthly, but incentives are often withheld. For instance, an ASHA worker working with a pregnant woman is supposed to be paid 600 rupees (8.34 USD) once the woman is taken to the hospital for delivery at the end of nine months. However, according to Yadav, in case of a complication in the pregnancy which requires the woman to be given a referral to a different hospital, the due amount that is supposed to be given to the ASHA worker is withheld. Even with the salary hike, which was itself a product of sustained protests and demonstrations by ASHA workers in states like Haryana, the remuneration given to ASHA workers falls exceedingly short of the minimum wage standards (as defined by the Seventh Pay Commission of the central government).

The strike in Bihar is part of a larger wave of mobilisation against government apathy towards workers’ rights. On January 17, 2018, the All India Scheme Workers Strike was organised with almost 6 million (60 lakh) workers demonstrating outside various district headquarters across the country. ‘Scheme workers’ refers to a category of workers that are employed under specific government policies and schemes. As opposed to ‘regular’ government employees, scheme workers are often referred to as “volunteers” or “activists” and are unable to access benefits that usually accompany job permanence. In these cases, the government is not liable to uphold minimum wage standards and there is widespread irregularity in remunerations.

In the 45th session of the Indian Labour Conference held in 2013, recommendations were made to the central government to regularize employment under schemes, to adhere to minimum wage standards, to provide workers with social security benefits, including pension, and to recognise their right to organise and collectively bargain. These recommendations have not been implemented thus far. The recommendations of the ILC, along with the demands to raise and uniformly distribute salaries, and secure the minimum wage at 18,000 rupees (250.16 USD) per month featured prominently in the strike organised by ASHA workers in the states of Madhya Pradesh and Haryana earlier this year. ASHA workers in the state of Haryana received an honorarium of 1000 rupees (13.9 USD) per month. This amount was not adjusted according to the rise in prices. Also, variations existed across states in terms of the amount paid. Satvir Singh, leader of the Centre of Indian Trade Unions, stated that ASHA workers in Kerala received 7,500 rupees (104.23 USD) and those in Telangana received a salary of 6,000 rupees (83.39 USD).  On the whole, the issues of irregularity and underpayment have remained prevalent across states. In response to the sustained protests in Haryana, the central government announced a salary hike in September. According to the notice, the amount paid was to be increased to Rs. 2,000 and the value of incentives was to be doubled. Moreover, ASHA workers were to be provided insurance coverage under the Pradhan Mantri Jeevan Jyoti Beema Yojana and the Prime Minister Suraksha Bima Yojana.

These measures, however, failed to address the underlying systemic issues associated with the regularisation of employment, minimum wage, social security, etc.The situation in Bihar is dire given that the promises made by the central government in September have not been fulfilled. The 12 point manifesto produced by the workers in Bihar represents the unanswered demands of ASHA workers across the country.  It also includes the demand to promote eligible ASHA workers to the post of ANMs (Auxiliary Nurse Midwife). According to Kumari, “ASHA workers who have been working with communities for over a decade are able to develop expertise in the issues faced by the people. This should be recognised and eligible workers should be given the opportunity to be promoted to the position of ANM.” Other demands include giving exemption in age limit after training (the current requirement being between the ages of 25-45 years), and 50% reservation for ASHA facilitators for Block Community Coordinator posts. Block Community Coordinators are responsible for overseeing the duties performed by ASHA workers. Currently, none of these posts are occupied by ASHA workers or facilitators. Similarly, in the case of nursing schools, ASHA workers demand a  reservation of 50% of seats for eligible candidates.

The strike, which was launched on the December 1, has now reached its 13th day. All health services were shut down from December 1 to 9. At the village level, Primary Health Centres (PHCs), remained shut with the exception of certain emergency services remaining operational. Yadav said that it is not the intention of the protesting workers to disrupt services and healthcare. However, given the inaction of the government, they are left with few alternatives. According to Yadav, the government remained unresponsive to the extent that the Health Minister, Mangal Pandey, refused to even acknowledge the strike. United under a common platform of the ASHA Sanyukt Sangharsh Manch, the workers organised a gherao (encirclement) of the offices of the Zilla Adhyaksh (District Magistrate) across 38 districts. The workers met the Assistant District Magistrates (ADM) in some districts. According to Yadav, the 7th and 8th demands of the manifesto can be resolved at the district level. The 7th demand pertains to the maltreatment of ASHA workers by the officials. Workers have demanded action in cases of harassment. The 8th demand specifies that incentives must be paid regularly and in the amount that has been specified under the scheme.The workers are now gearing for a two-day “Ghera Dalo, Dera Dalo” demonstration outside the offices of the Chief Minister in Patna on December 13 and 14. PHC and related services have resumed in the meantime. If the situation does not change then the services will be stopped once again. 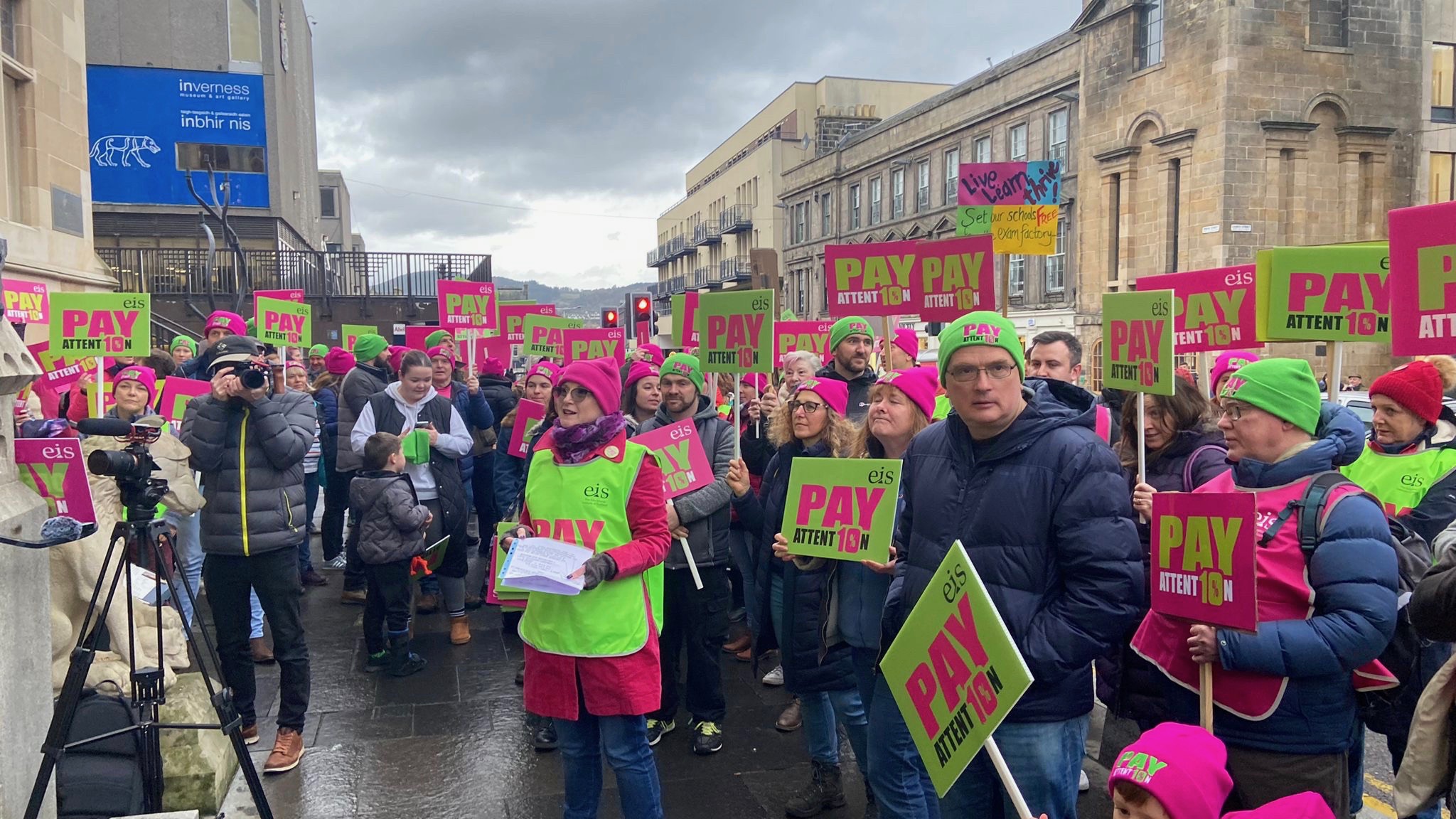