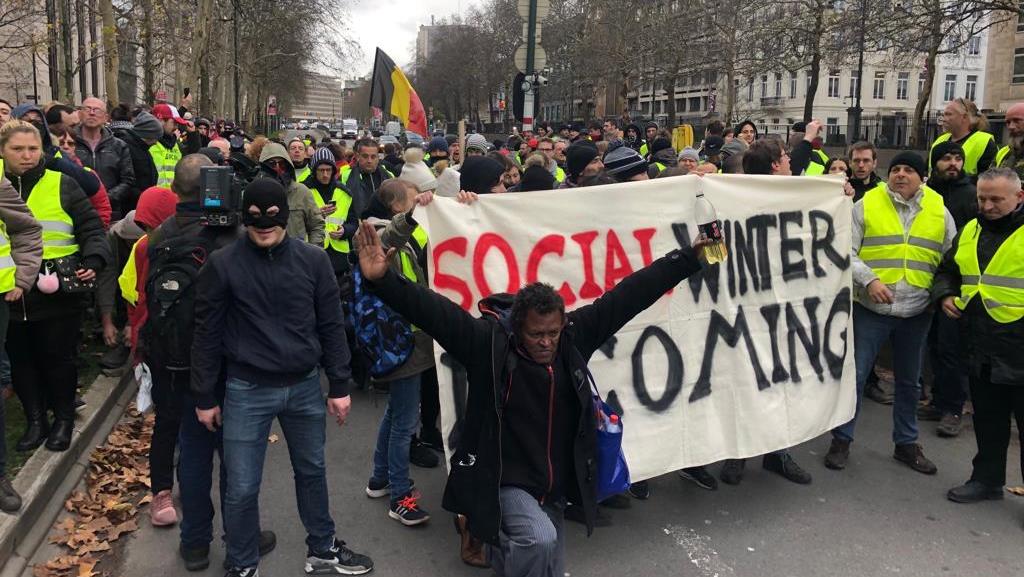 In a massive protest against the anti-worker policies of the government, a large section of the Belgian working class went on a 24-hour national strike against the budget cuts and regressive changes in working hours on December 14. The government, led by the centre-right coalition and headed by Prime Minister Charles Michel was accused by the protesters of lowering the working class’ purchasing power capacity and pensions.

According to reports, the mobilizations were strong in East Flanders, Llege, Antwerp and Namur and involved various sectors including metal works, automobile, food, transport and other public services. In many places, the protesters marched wearing yellow vests in solidarity with the French protesters (of the Gilet Jaunes or the Yellow Vests movement). Many of them were also seen wearing red and green high-visibility vests. Police deployed water cannon to disperse the protesters participating in the strike.

The Workers’ Party of Belgium (PTB) expressed full support and solidarity with the workers’ protests. PTB demanded the disbursement of pension from the age of 65 rather than 67, a reduction in VAT on energy from 21% to 6%, a rise in wages, effective and free public transport as well as urgent implementation of a Millionaire’s Tax to raise funds. In the last three years, Belgian’s working class lost 2.3% of purchasing power.

The PTB President, Peter Mertens, said that “the government has lowered our purchasing power, is attacking our pensions and is not happy about us. A study confirms to this day that Belgian wages are those that have made the least progress in all of Europe. And, meanwhile, unfair taxes are on the rise and big corporations are pouring dividends on shareholders.”

“Today is an additional warning to the government…Belgium from below expressed its vote of mistrust towards the FEB-VOKA [multi-sector employers’ organization representing companies] bosses’ government. A radical change of policy is urgent,” Mertens added.

Earlier, in November end, workers had organized large-scale protests across the country against successive cuts in the budgets allocated for public services.

Presidential candidate Donald Trump wants to “lift up” workers. Here’s what he actually did in power