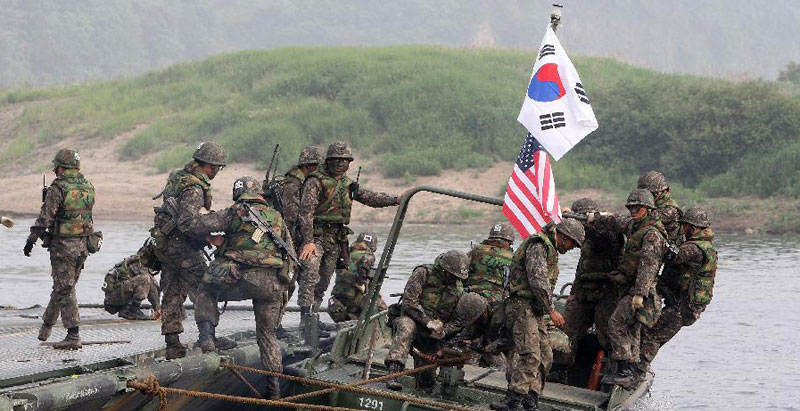 For over four decades, the US and South Korea held drills simulating the invasion of North Korea.

Recently, a commentary appeared in North Korea’s official news agency, KCNA, pointing out that the country would not give up on its nuclear capability until the “nuclear threat” it faces from US is eliminated. This seems to have surprised the very same western media outlets which, ever since talks between the US and North Korea started, have been arguing that North Korea cannot be trusted.

The KCNA commentary reminds observers that the Korean peninsula “encompasses not only our republic’s territory but also South Korea where the American nuclear weapons and armed forces for invasion are spread out.”

One US defense official, when asked about the presence of American nuclear weapons in South Korea, is reported to have said, “We do not discuss the location of nuclear weapons”, adding, “However, in the early ’90s, President George H. W. Bush announced the withdrawal of all naval and land-based tactical nuclear weapons deployed abroad.”

Even if this hesitant reassurance by the defense official is to be believed, the US, every year since 1976, has been deploying its nuclear-armed bombers and aircraft carriers in joint military exercises with South Korea which simulates the land invasion of North Korea and bombing of its cities. Nuclear-armed submarines and ships regularly patrol the waters around the Korean peninsula.

Sharing of US nuclear weapons, which can then be hosted in Japan, has been under consideration by the Japanese establishment since last year.

“When talking about denuclearization of the Korean peninsula, [the US] needs to know that it means eliminating all nuclear threat factors.. not only [in] the North and the South, but [also] from all neighboring areas,” the commentary stated.

According to the leaked draft of the Trump administration’s Nuclear Posture Review of 2018, “the White House hopes to build new submarine-launched cruise missiles, increase the supply of low-yield nuclear weapons and consider nuclear retaliation against non-nuclear attacks,” states a dossier by the Tricontinental Institute of Social Research.

North Korea has also been seeking an end-of-war declaration from the US. The Korean war was only halted with an armistice and not brought to a formal end with a peace agreement.

“If we unilaterally give up our nuclear weapons without any security assurance despite being first on the U.S. list of targets for pre-emptive nuclear strikes, that wouldn’t be denuclearization – it would rather be a creation of a defenseless state where the balance in nuclear strategic strength is destroyed and the crisis of a nuclear war is brought forth,” the KCNA stated.

North Korea has always argued that it would have no need of nuclear weapons were it not for the threat from the American military presence in the region. It has consistently maintained that the process of denuclearization can only be a mutually reciprocal one, where every step taken in the direction by the North, will be reciprocated by corresponding measures by the US towards improving the relationship between the two countries.

“The corresponding measures we have asked the United States to take aren’t difficult for the it to commit to and carry out. We are just asking the United States to put an end to its hostile policies and remove the unjust sanctions, things it can do even without a snap of a finger,” the commentary read.