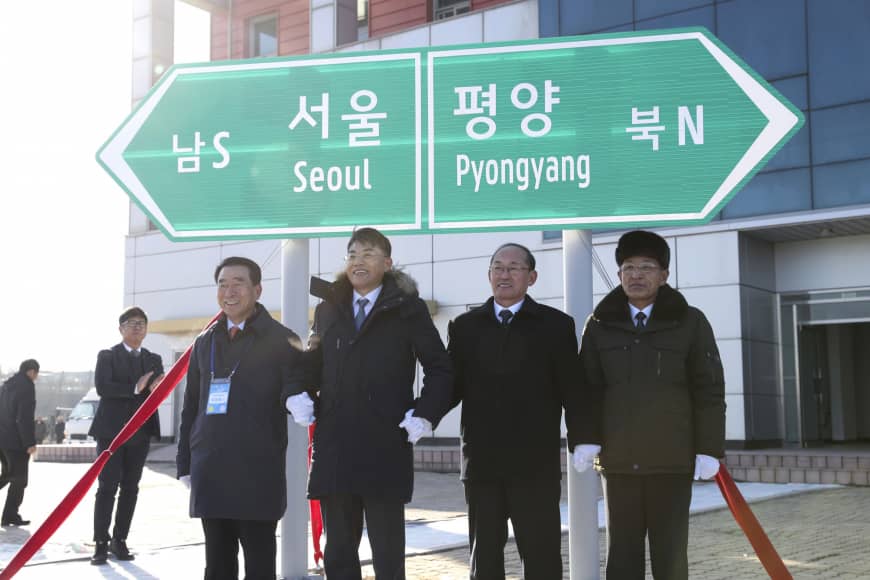 North and South Korea have been steadily taking steps to improve relations.

North Korea has called on South Korea to stand firm and not allow a proposed rail link and the larger agenda of reunification to be stalled by the US. This was over a week after the countries jointly held a ground-breaking ceremony to symbolize  the start of the reconstruction of the long-severed railway links between the two.

An editorial published recently in the ruling party’s organ, Rodong Sinmun, highlighted that the ceremony was merely symbolic as the US-led international sanctions still stand in the way of starting the actual construction, as long as South Korea commits to abide by it.

In a meeting held in April 2018, between South Korea’s president Moon Jae-in and North Korea’s leader Kim Jong-un, both countries committed “to adopt practical steps towards” reconnecting and modernizing the railway links between the two.

In September, a group of businessmen accompanying Moon for a summit with Kim met with North Korea’s deputy prime minister for economy, Ri Yong-nam, and sought to deepen economic ties between the two countries.

Talks were initiated about restarting the Kaesong industrial complex in the border town of North Korea, where a number of businesses in the South had invested. Inaugurated in 2004, operations in this industrial complex was wound up by South Korea after the North’s missile tests in 2016.

The plan of reconnecting the railways was elaborated by Moon. His ambitious plan of developing an “H-shaped economic belt” involves connecting the economic zones in the east coast and the west coast on either sides of the north-south border, with another horizontal line linking the eastern line to the western line.

Apart from boosting trade, such a project would provide the North with the capital required for infrastructural upgrade and the South with a land-connection to China, and through it, to Central Asia. More importantly, it would be a crucial step towards easing tensions and suspicions between the two, and towards achieving the reunification of Korea – a goal which is stated by both sides.

However, with the US-led international sanctions banning countries from pursuing any economic activity in the North which could bring any cash flow to its government, no concrete agreements could be reached in the September summit.

Nevertheless, South Korea thought that carrying out a joint survey to explore the details of the plan would not be a violation of the sanctions. The US, which has veto power in the UN Security Council – the body in charge of sanctions enforcement – disagreed, and called on South Korea to not proceed with normalizing relations at such a rate before the North implements denuclearization.

In October, South Korea’s finance minister Kang Kyung-wha stated that her government would seek exemption from the sanctions to be able to pursue these projects without violating the international sanctions regime. A partial exemption was granted in November by the Security Council for the limited purpose of carrying out a survey.

Following the survey, when both sides pushed for implementation of the project, a ceremony symbolizing the start of the construction was scheduled on December 26. Since the ceremony involved moving some vehicles into the North, South Korea had to seek another ‘exemption’ from the Security Council, which was granted.

“The railways will not only reduce time and space but also the distance between the hearts of the South and North,” South Korea’s transport minister Kim Hyun-mee jubilantly announced while speaking at the ceremony.

North Korea’s vice-railway minister, Kim Yun Hyok, used the occasion to stress that what will come of this ceremony “depends on our nation’s.. will. If we are swayed by others’ views, we cannot achieve the unification that our nation wants.”

The Unification Ministry of South Korea was quick to put out a statement that the “Actual construction will be pursued in accordance with progress in the North’s denuclearization and the state of sanctions against the North.” Rodong Sinmun’s editorial criticized this formula forced on South Korea by the US.

The hurdle that is the US.

North Korea has consistently maintained that the denuclearization it had committed to was a reciprocal process. As and when the US abandons its hostile policy towards the country, and eliminates the threat it poses by its military presence and war-games in the region, the North will, at the same pace, eliminate its nuclear power. North Korea has also insisted that a denuclearization must involve the entire peninsula and its territorial waters, which are plied by American nuclear-armed submarines and ships.

The editorial argues that the US has vested interests in ensuring that the problems in North-South relations remain unsolved because “as the North and South approaches closer to.. unification, the United States will gradually lose its grip on.. Korean Peninsula, and.. the foundation of America ‘s strategy for Asian domination will be shaken.”

Without South Korea prying loose from the American grip and taking charge of its future course with North Korea independently, it is difficult to move beyond such symbolic ground-breaking ceremonies.

“Even if we look all around the globe, it is hard to find a case where we declare that we [will not start construction] soon after opening a groundbreaking ceremony,” the editorial states, adding, “Everyone who participated in the groundbreaking ceremony still expresses their sad and frustrating thoughts. In the southern part of the country, the words “groundless ceremony without grounding”.. are being heard.”

Acknowledging that “remarkable” progress has been made in improving the diplomatic relations between the North and South, the editorial complains that every time an opportunity arose to take practical steps to improve relations, “the United States.. has braked in every corner.”

Further, the article accuses the US of dispatching CIA agents to the South Korea’s capital city of Seoul to ensure that the South does not pursue any programme with the North which it does not approve of. A “Korea-US Working Team” has also been set up to “monitor the progress of the North-South relationship.”

“If North-South relations continue to be a victim of US.. policies,” the editorial asks, “when will the Korean people.. of the divided nation.. achieve peace and prosperity?”