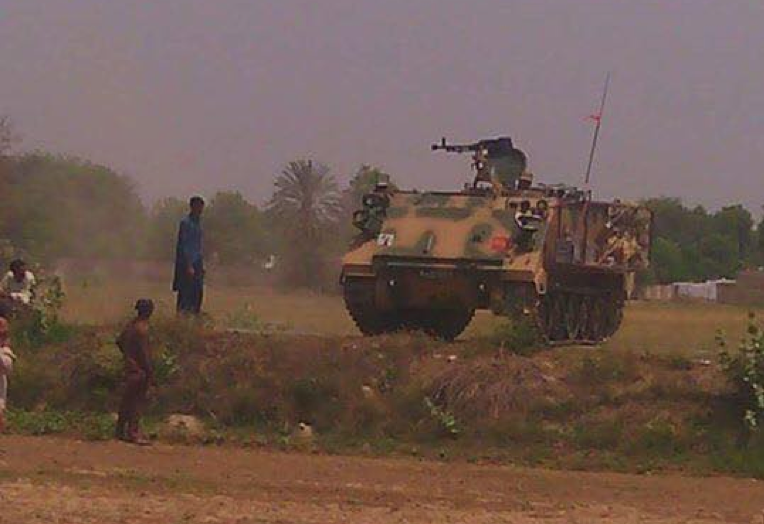 As many as 13 people have been killed and 2,000 arrested since the beginning of army repression in the early 2000s.

A recent hearing by the National Human Rights Commission (NHRC) of Pakistan may be the first step to some form of resolution to a decades-long farmers’ struggle. The hearing on December 31 was about the Okara Military Farms, whose cultivators have waged a long agitation to protect their rights and avoid eviction. During the hearing, the army admitted that did not own the land.

Located in southwest Punjab, the Okara farmland stretches over 17,000 acres and houses 7 farms, 2 dairy factories, and a population of around 200,000 people spread over 20 villages. The farmland had been leased to the army by the British colonial government for 20 years under a contract signed in 1913. Peasants from East Punjab (now a part of India) were relocated to the Okara area to cultivate the military farms. The contract, which was set to expire in 1933, was never renewed. Yet, the army continued to control the land. After Partition, control was shifted to the Pakistani army. The local system of sharecropping, known as batai, continued between the farmers and the army  throughout this period. The army provided the farmers with seeds and fertilizers and in exchange, the farmers gave the army half of the total produce.

Conflict began to arise in 2000 when the General Pervez Musharraf-led government sought to introduce a change in the terms of the 1913 contract. The proposed change would have transformed the status of farmers from sharecroppers to tenants who would pay rent in cash. The reasons cited for the change were corruption and mismanagement of the land by the farmers which had led to ‘diminishing profitability’. Farmers feared that the new contractual terms would raise the cost of tenancy and would raise the possibilities of eviction. The new tenancy provision was an attack on their access to the land they had been cultivating for generations. Farmers refused to sign the new lease agreements and began to resist the efforts of the military to evict them from the land. Subsequently, the Anjuman Muzareen Punjab (AMP) (Tenants’ Association of Punjab) was formed with farmers raising the slogan, ‘Maliki ya Maut’ (Ownership or Death!).

The following years were characterized by intermittent periods of violence. The army  resorted to coercive tactics, including the setting up of ‘torture cells’ to force the farmers to sign the agreements. The military also deployed the Pakistan Rangers, a paramilitary force, who besieged the Okara area for extended periods of time, most notably in August 2002 for around three months and in May 2003 for two months, cutting off the supply of food, water, electricity, and all lines of communication. The multiple instances of abuse and torture were recorded in a 54-page report published by Human Rights Watch in 2004 titled ‘Soiled Hands: The Pakistan army ’s Repression of the Punjab Farmers’ Movement’. Over the years, the issue was brought up under successive governments. However, not much was done to alleviate the situation of the farmers. At the same time, the army  continued to make mass arrests, often implicating farmers on false charges, including booking them under anti-terrorism laws. Prominent leaders of the AMP were routinely arrested on false charges and forced to serve extended periods of time in jail. Over the years, the conflict led to the deaths of nearly 13 farmers and the arrests of nearly 2000 people.

In 2016, an investigative committee was set up by the National Human Rights Commission of Pakistan to look into the conflict in Okara. In its interim report, the committee made certain crucial observations, including deeming the restrictions posed on the peaceful gatherings of the AMP and local authorities as “arbitrary and unconstitutional.” It decried the use of the Anti Terrorism Act against AMP members and leaders as draconian, and criticised the excessive use of force reflected in the use of heavy military vehicles and weapons against the citizens. The report also observed that the government of Punjab had not taken the necessary measures to resolve the conflict.

The matter was officially brought in front of the NHRC in 2018. During the hearing held on the December 31, the Okara Military Farms commandant Brigadier Rana Mohammed Fahim officially recognized that the Okara Military Farms land belonged to the government of Punjab, stating that the army  had retained control over the land to procure fodder for horses and cattle. The hearing was also attended by members of the Awami Workers Party, government officials, and Okara tenants represented by Tahira Abdullah, a human rights activist, and Farhatullah Babar, a former member of a senate sub- committee for the Okara dispute.

The hearing was presided over by NHRC Chairman retired Justice Ali Nawaz Chowhan who laid out the main provisions of the proposal in a statement to Dawn, stating that, “It has been principally decided that criminal cases registered against the tenants will be withdrawn. Batai (share from crop), which existed prior to the year 2000, will be restored and tenants would start giving 50 per cent of their production to the army or the government. Tenants would not get ownership rights, but no one will harass them in future and they will not be dislocated.” Furthermore, the army has stated that it will waive off the dues owed by the farmers which have accumulated over the past 18 years and will begin paying rent to the Punjab government after the batai system is restored.

While the proposals have been welcomed by some as initiating a resolution of the dispute, the provisions have failed to adequately protect the rights of those who have faced the brunt of marginalization and oppression – the tenants.The proposal, as it stands, in no way ensures the rights of farmers over the land. In light of this, tenants have sought an adjournment of the proceedings till January 17 in order to arrive at a consensus regarding the further course of action.