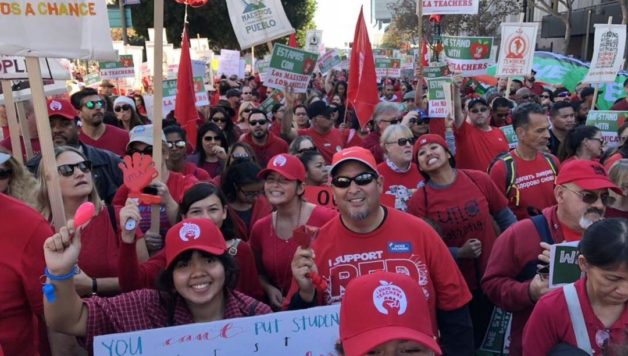 The teachers accused the Los Angeles Unified School District authorities of bad faith during the nearly 20 months of negotiations.

Teachers in Los Angeles are gearing up for a massive strike on January 10, demanding the redressal of their long pending grievances. The call for the strike was given by the United Teachers of Los Angeles (UTLA). The union cited the failure of nearly 20 months of negotiations with the Los Angeles Unified School District (LAUSD). LAUSD is the largest public schooling network in California and the second largest in the United States.

In their statement, UTLA demanded that LAUSD address the charter industry drain that siphons off more than 600 million USD from public schools every year and immediately use the 1.9 billion USD in the unrestricted reserves for smaller class sizes, more nurses, counselors and librarians. It also urged LAUSD to commit to more support for special education, early education, bilingual education and adult education. The demands also include the end of the toxic overtesting of students, as well as the empowerment of parent and educator voices at the school site with stronger Local School Leadership Councils.

UTLA is the nation’s second-largest teachers’ union, representing more than 35,000 educators and health and human services professionals working in the LAUSD and in charter schools.

UTLA president Alex Caputo-Pearl said that “there has been one force at the bargaining table pushing to improve the educational experience for the 600,000 students in the district, and that has been UTLA and the parents and community standing with us.”

“By dragging us through bad faith bargaining for 20 months and refusing to invest in our schools, the district has disrespected our students and disrespected us. We have exhausted our options,” he added.

According to news reports, UTLA also went to court on January 6 to scuttle LAUSD superintendent Austin Beutner’s repeated attempts at an injunction, based on a disingenuous claim that UTLA did not give sufficient notice of their intent to strike.

On December 15, prior to the announcement of the strike, around 40,000 teachers took out a massive rally in the city under the banner of UTLA.

The last year saw massive strikes by educators in many States in the United States on similar demands.