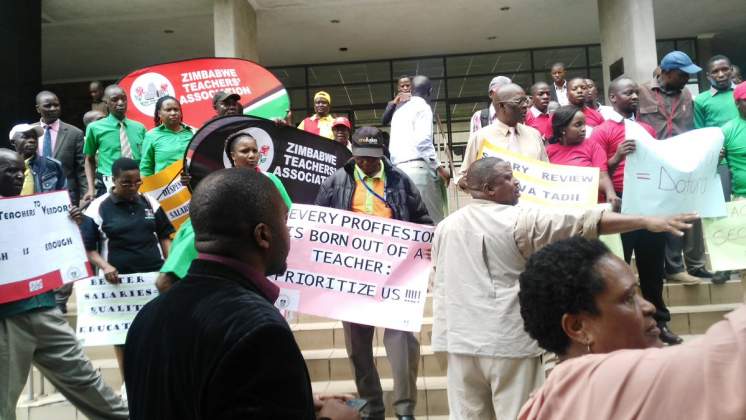 Teachers' unions said that the current salaries were not enough to meet basic needs. File Photo

Following the unrelenting strike by doctors, teachers in Zimbabwe have announced a nationwide strike. Among the lowest paid in the world, teachers in Zimbabwe are demanding a pay rise from the current $500 dollars – at which unions claim they are unable to even afford sufficient food for their family – to $3000. They are also demanding that they be paid in US dollars, rather than bond notes pegged to USD, which is the current system of payment.

Zimbabwe abandoned its national currency, the Zimbabwean dollar, in 2008, amid a financial crisis which saw the currency lose value due to hyperinflation. The currency had deteriorated to such an extent that the cost of a loaf of bread rose to an amount with which one could have bought over ten cars a decade ago. A 100 trillion Zimbabwean dollars was not enough to buy a bus ticket.

Instead of taking the necessary measures to rewire the economy and mend its national currency, Zimbabwe adopted the US dollar as its main currency in 2009. The South African rand, and more recently, the Chinese yuan and Indian rupee are also accepted, while the USD was predominantly used.

In 2016, when the tanking liquidity of the USD left account holders unable to withdraw sufficient amounts in the currency due to its shortage in banks, the central bank introduced bond notes, which were backed by the USD. Each denomination of a bond was declared to be equal to the same denomination of USD.

Most payments, including for doctors and teachers were made in this currency. Protests against the system began immediately, as most people did not trust this note which was not even a proper currency, but a legal tender pegged equal to the  dollar.

However, as issuance of these bond notes exceeded the USD reserve in the bank, the value of the bond notes began to steadily decline vis-a-vis the US dollar. By October 2018, the government tacitly accepted that it was betraying the promise of maintaining a 1:1 ratio of bond notes to USD value by issuing a notice to the banks to create seperate accounts for holding foreign currency and for holding bond notes.

Retailers have begun to charge for basic commodities bought with bond notes over four times higher than when bought in USD. In December last year, the largest Zimbabwean fast food company, which serves 4.5 million customers a month, began offering discounts on bills if paid in dollars. Pharmacies have refused to sell medicines for bond notes. Black market currency trade where a higher denomination of bond notes can be exchanged for a lower denomination of USD or rand is rampant.

40% of this company is owned by Anheuser-Busch InBev, the world’s largest beer brewer which had a 28% market share of the all the beer sold in the world last year. In 2016 – before acquiring in October its competitor multinational corporation, SABmiller, at $107 million dollars – the company had reported a revenue of $45 billion.

Not wanting upset the world’s largest beer brewing company, the government, on January 4, convinced the company to withdraw its notice about not accepting bond notes, and promised to “endeavor to provide the foreign currency required to ensure that Delta continues to trade on current basis.”

However, the government continues to maintain that there are not sufficient foreign reserves in the country to make payment in USD to its teachers and doctors, or raise their salaries. Teachers and doctors in Zimbabwe receive among the lowest pay in the world for their professions.

Progressive Teachers Union of Zimbabwe (PTUZ), in its petition to the government last month, had complained about the lack of budgetary allocation. Demanding a pay rise, the union drew the government’s attention to the plight of the education system where the teachers “don’t have money to even report to duty.”

“Our members are unable to report for duty” from January 8, when the schools reopen, the Zimbabwe Teachers’ Association said in the statement announcing the strike. “To enable the teachers to report for work and to subsist, we demand the payment of salaries in US dollars.”

Apart from the erosion of real incomes of teachers, the country is also suffering from an acute shortage of teachers. “We have a shortage of 19,000 teachers who need to be replaced according to the new curriculum,” said Sifiso Ndlovu, chief executive of Zimbabwe Teachers Association. “The pupil to teacher ratio is at 1:70 and sometimes goes up to 1:101 in worst case scenarios. If we look at the budget, it was not increased and is at a standstill.”

However, this refusal to increase budgets for public sector, which is  in fact a commitment to reduce the public sector and practice austerity, has been commended by Zimbabwe’s western donors. It has also been deemed a sound economic policy for the post-Mugabe government to fix the economic crisis left behind by Mugabe administration.

The long queues at fuel stations, empty supermarket  shelves, shortage of medicines, doctors and teachers not having enough money to report to duty – all suggest that these ‘reforms’, sold by neoliberal pundits as a prescription for fixing the economy are not proving to be a solution in Zimbabwe, just as they didn’t anywhere else in the world.