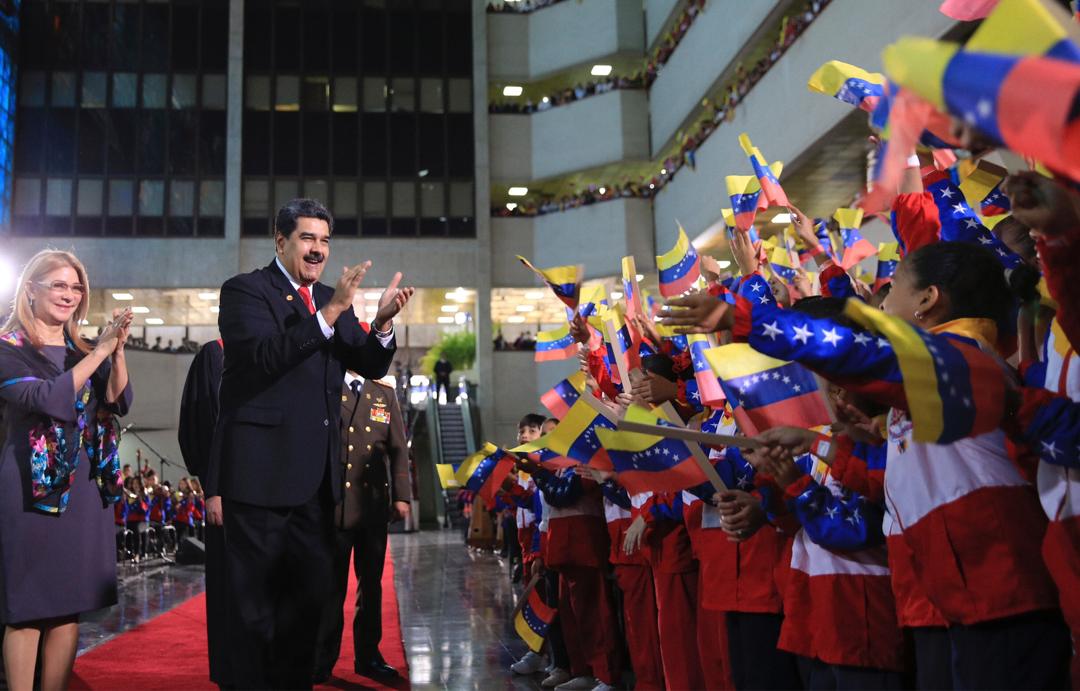 Former bus driver and student activist Nicolás Maduro began his second term as the president of the Bolivarian Republic of Venezuela on January 10 after winning presidential elections in May 2018 with 67.84% of the votes cast. Maduro, during his swearing-in stated, “I swear on behalf of the people of Venezuela, on our ancestors and the great Chief Guicaipuro, on our afro-descendent people, on the Liberator Simón Bolívar, on the legacy of the Commander Hugo Chávez, on the children of Venezuela and the future”. His term in office will end in 2025.

The Supreme Tribunal of Justice presided over the ceremony as the National Assembly is in contempt of court since 2016 and as such, their actions are invalid.

The swearing-in was attended by international delegations from over 90 countries. Miguel Diaz-Canel, the president of Cuba, Evo Morales, the president of Bolivia, Salvador Sánchez Cerén, the president of El Salvador, Ralph Gonsalves, the prime minister of Saint Vincent and the Grenadines, all were present in Caracas while Mexico, Turkey, China, Iran and a number of other countries sent ministers and high-level diplomats to represent them.

While the Supreme Tribunal of Justice was full of heads of state, diplomats, members of the National Bolivarian Armed Forces of Venezuela, outside, the streets were erupting in celebration. Thousands of Venezuelans took to the streets to show their support to Nicolás Maduro and the continuation of the Bolivarian Revolution.

Across the world, mobilizations were held outside the embassies of Venezuela to show support and solidarity. Mobilizations were registered in Argentina, El Salvador, Peru, Catalonia, Chile, Puerto Rico, Honduras among others, and hundreds of organizations worldwide have released declarations in support of Maduro and calling for respect of the sovereignty of Venezuela.

Ahead of the swearing-in, tensions were high as the United States and conservative Latin American countries allied with the imperial power who are organized in the “Lima Group” declared they would not recognize Nicolás Maduro’s second term. Maduro had also strongly warned that a coup d’etat was (and continues to be) planned against him, directed by the US, but to be carried out with support from the same conservative Latin American countries of the Lima Group. During the swearing-in Maduro reiterated that, “Venezuela is at the center of a global war waged by US imperialism and their satellite states”.

He declared, “The world is bigger than the US empire and its satellite governments, there is a bigger world out there, and here we are. There is no longer a hegemonic and unipolar world and to this world, Venezuela opens its arms of respect, cooperation and brotherhood,”.

In his speech, Maduro also brought forth the proposal of a summit of presidents from the countries of the Community of Latin American and Caribbean States (CELAC) in order to confront the climate of “ideological intolerance and aggression that harms our continent and betrays the dream of the liberators [of Latin America and the Caribbean]” and to reinforce continental unity. This is a clear reference to the rise to power of far-right candidates with discourses based on hate and exclusion who are eager to follow dictates of the US. These include Jair Bolsonaro of Brazil, Ivan Duque of Colombia and Mauricio Macri of Argentina.

Maduro announced that on Monday January 14 he would speak before the National Constituent Assembly, and present a series of economic measures as part of the Program of Economic Recovery and Growth in order to combat the economic crisis generated by the harsh sanctions from the US and the European Union.

Shortly after the ceremony, the Organization of American States (OAS) passed a resolution agreeing to “not recognize the legitimacy of Nicolas Maduro’s new term as of the 10th of January of 2019.” The resolution had 19 votes in favor, 6 against, 8 abstentions and 1 absence. Those who voted in favor were the usual suspects, mostly members of the Lima Group: Argentina, Bahamas, Brazil, Canada, Chile, Colombia, Costa Rica, Dominican Republic, Ecuador, Guatemala, Guyana, Haiti, Honduras, Jamaica, Panama, Paraguay, Peru, and Saint Lucía and the United States. While Bolivia, Dominica, Nicaragua, San Vicente and the Grenadines, Suriname, and Venezuela voted against, Antigua and Barbuda, Barbados, Belize, El Salvador, Mexico, St. Kitts and Nevis, Trinidad and Tobago and Uruguay abstained.

The president of Paraguay Mario Abdo Benítez announced after the swearing-in that Paraguay would break diplomatic relations with Venezuela. The embassy will be closed and the diplomatic staff withdrawn.

On the other hand, the General Secretary of the United Nations assured today that the organization would continue working with the government of Nicolás Maduro during his second mandate and highlighted that it is not their task to recognize or not recognize heads of state.

Today marks a new chapter not only for Venezuela and its Bolivarian Revolution, but for all of the people and nations who dare to challenge the hegemonic world order and present and people-first alternative.

In his swearing-in, Maduro swore to “defend the independence and the absolute integrity of the homeland, to bring social and economic prosperity to our people and build Socialism of the 21st century, as was the mandate of our Commander Chávez. I swear on our homeland! I swear on our people!…I swear on my life!”