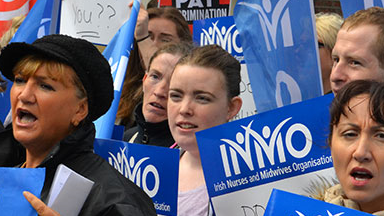 A day-long strike will be held on January 30 and on a number of days in February if the nurses' demands are not met.

Nurses and midwives in Ireland are gearing up for strikes at the end of January and in the first two weeks of February, demanding recruitment of more staff. On Tuesday, the Irish Nurses and Midwives Organization (INMO) announced a day-long strike on January 30. In case the dispute is not resolved, similar strikes will be held on February 5 and 7, and then on 12, 13 and 14. The striking INMO members will withdraw from work for 24 hours, providing only lifesaving care and emergency services.

“The dispute centers on ‘safe staffing’ in the public health service. The Health Service Executive (HSE) has not been able to recruit and retain enough nurses and midwives on current wages. The number of staff nurses fell by 1,754 (6%) between 2008 and 2018, despite an aging, growing population making the health service busier. This would be only the second national strike in the INMO’s hundred-year history,” INMO press release said.

INMO general secretary Phil Ní Sheaghdha stated that “Going on strike is the last thing a nurse or midwife wants to do. But the crisis in recruitment and retention has made it impossible for us to do our jobs properly. We are not able to give patients the care they deserve under these conditions.”

INMO president, Martina Harkin-Kelly, said, “We entered these professions because we care for our patients. We’ll be going on strike for the exact same reason. Ireland’s patients deserve better than this understaffed health service.”

According to the Irish Examiner, in December, members of the Psychiatric Nurses Association (PNA) had also voted in favour of industrial action in response to the recruitment and retention crisis in the health service. Up to 95% of their members voted in favour of taking action, including strike action. In their statement on January 11, following a meeting of the PNA Officer Board, they announced the decision to commence an escalating campaign of industrial action, beginning on January 31. They have called on the nurses to boycott work in additional hours (i.e. overtime) on January 31 as well as on February 1, 5, 6 and 7. PNA members will go on strike on February 12, 13 and 14.