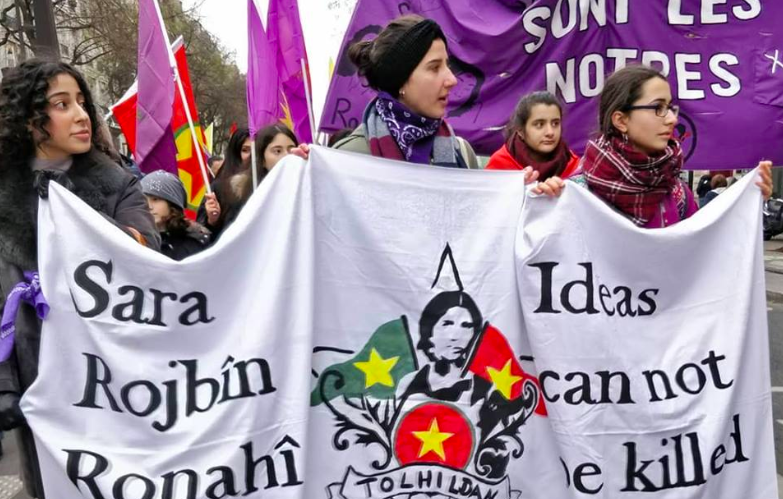 The protesters demanded justice for the assassinated activists and asked France to stop its collaboration with Italy.

Progressive sectors in France marched in Paris on Saturday to honor the memory of three Kurdish activists, Sakine Cansiz, Fidan Dogan (Rojbîn) and Leyla Saylemez, who were murdered on January 9, 2013 by a man, allegedly at the behest of Turkish intelligence. The march was organized by the Kurdish Democratic Council in France (CDKF) under the banner of ‘Justice for the three Kurdish activists executed in Paris.’

CDKF claimed that around 15,000 people, a majority of whom were women, participated in the march. They stated that “France must have the courage to judge Turkey for its state crimes. It is time for France to act against impunity”. People displayed placards that said, “Justice for the Victims”, “It was a Femicide”, “Solidarity with Rojava”, “Condemn the Turkish State Terror”, “Release Abdullah Öcalan”, etc. Pictures of several Kurdish freedom fighters were also displayed in the march.

While addressing the gathering, French Communist Party (PCF) National Council chairman Pierre Laurent said the “investigation reports say that this crime was commissioned by the Turkish State. The Current Turkish Ambassador to France was then deputy director of Turkish intelligence services. Behind this crime, there’s Erdogan’s criminal dictatorship”.

“Turkey continues to assassinate its opponents in its territory and abroad. It imprisons thousands of trade unionists, academics, journalists. It is waging an endless war against the Kurds,” he added.

The Young Communist Movement of France (MJCF) expressed solidarity with the Kurdish activists. They also urged the French president, Emmanuel Macron, to stop his collaboration with “the war criminal Erdogan who suppresses and massacres the Kurds, and who ordered this assassination in Paris.”

According to reports, on the night of January 9 2013, the bodies of the three women activists of the Kurdistan Workers’ Party (PKK) were found on the premises of the Kurdistan Information Center in Paris. They had been shot in the head several times. Investigations by the French authorities pointed to the involvement of MIT (Turkey’s National Intelligence Organization) in the murders. The suspected murderer, Ömer Güney, was a 34-year-old Turkish man who worked as a maintenance employee at a French airport. Even though Güney was tried and jailed, he died on December 13, 2016, due to brain tumour amid strong allegations that he too had been killed at the behest of the MIT.