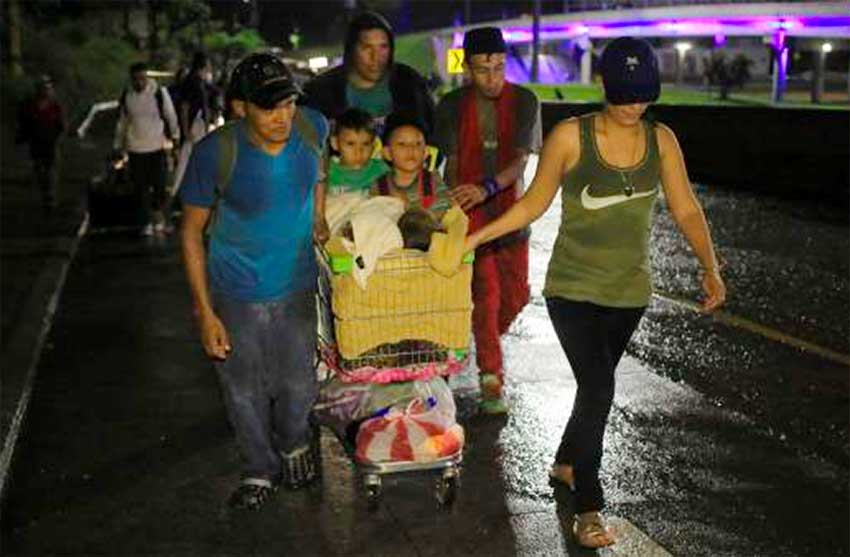 At least five massacres have taken place in Honduras since the beginning of 2019.

A group of around 1,000 Hondurans set off for the United States late on Monday and early Tuesday on a perilous journey through tropical rainforests, vast deserts, freezing highlands and hundreds of towns and cities. The migrant caravan reached neighboring Guatemala on Tuesday and is continuing its march towards Guatemala City. Some hundred migrants from El Salvador have also started making their way towards Guatemala to join the group of Hondurans.

Over the next few months, the caravan will reach its target destination, the US-Mexico border, where thousands of migrants from last year’s caravan are still waiting to get processed by US immigration authorities. US authorities have introduced a new “metering system”, which limits the number of asylum applications that are processed each day. This system forces many migrants to either return home or find work in Mexico. Some of them even cross the border between official ports of entry.

Why have the thousands of migrants taken such great risks?

A young man from San Pedro Sula, who is making the journey with his three young kids, told Radio Progreso of Honduras: “I am leaving because of the insecurity, political persecution and the repression that is faced  by those of us who have made it clear that we do not want this government. Added to this is the situation of violence that exists in the country. There have been so many massacres in just the last couple of days. We are scared that one day, it will be us who they kill, my kids, my wife,”.

The extreme poverty, unemployment, corruption, lack of access to education and healthcare, and violence are the central reasons cited by the migrants. In Honduras specifically, the political, economic and social situation has vastly deteriorated since the US-supported military coup d’etat carried out in 2009 and was further exacerbated at the end of 2017 when sitting president Juan Orlando Hernández (JOH) ran for re-election (prohibited by the constitution) and declared himself winner after committing blatant and open electoral fraud. Thousands of Hondurans across the country took to the streets in protest for months after the fraud and their protests were met with heavy repression. Around 40 were killed on the streets. JOH’s fraudulent electoral “victory” which was officially announced 20 days after polls closed was immediately recognized by US president Donald Trump.

The calls of “Get out JOH” (Fuera JOH) have not died down nearly a year after Hernández began his second term. The past year was full of high-level corruption scandals such as the Pandora scandal which involved several parliamentarians of JOH’s National Party and price hikes of basic necessities. Meanwhile, job opportunities remain scarce.

The violence in Honduras also shows no signs of letting up. In 2019 alone, already 5 massacres have taken place with nearly 20 killed by gunmen and just on January 1, fourteen people died from violent incidents. Honduras has one of the worst homicide rates in the world.

Last year in October, more than 7,000 migrants from Honduras tried to reach the US-Mexico border. By mid-November, most of the migrants, from different countries, had reached Tijuana, Mexico, bordering California in the US. Around the same time, 400,000 people were stopped at the US border in 2018 and another 100,000 applied for asylum in the US. According to the Associated Press, approximately 4,000 migrants and refugees have died or gone missing along the route since 2014.

To stop the migrants, the US government has been trying to put pressure on Central American governments to hinder the movement of the caravans. Honduras and Guatemala have deployed their military and police personnel at the border crossings to stop potential migrants.

The Pentagon announced on Monday that it is extending the deployment of the 2350 troops to the US border until the end of September. The caravan has also served as fodder for Trump to seek funding for the border wall on the US-Mexico border. By resorting to scaremongering about the migrants, Trump is trying to rally his supporters and push the Democratic party in into a corner so that they are forced to approve his demand for USD 5.7 billion for the wall.