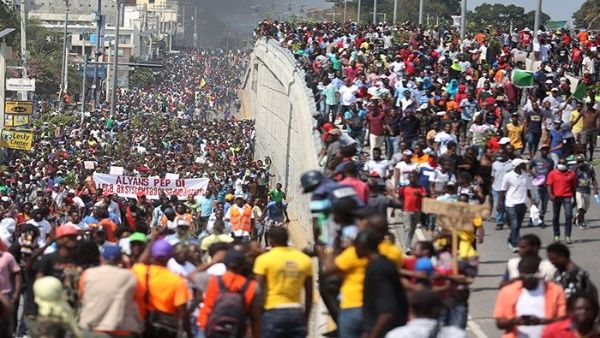 On February 7, thousands of Haitians took the streets of the capital Port-au-Prince and other main cities, such as Les Cayes, Mirebalais, Cap-Haïtien, etc., to protest against corruption and demand the resignation of president Jovenel Moïse, who led the country into a socio-political and economic crisis.

Frustrated by fluctuating currency, rampant inflation and corruption, protesters burned tires, and blocked roads. The demonstrations caused closure of schools and small businesses. According to the national police, the protests caused 2 deaths, 36 arrests and several injured.

The mobilizations were called by the opposition and social organizations to celebrate people’s power and to commemorate the 33rd anniversary of the fall of former Haitian president Jean-Claude Duvalier. On February 8, 1986, Duvalier was overthrown by a popular uprising and fled to France, ending 29-years of family dictatorship and ushering in a possibility of democracy in Haiti.

Two days prior to the protests, on February 5, president announced the state of “economic emergency” in the country. It aims at reducing state spending, in accordance with the decree of April 5, 2017. According to government officials, the plan aims to addressing the difficulties faced by a large majority of the population in meeting their economic and social needs, due to the widespread increase in the prices of basic necessities.

Moïse is accused of embezzlement of 3.8 billion dollars of Petrocaribe funds, offered to the country through a crude oil program initiated by Hugo Chavez in 2005 and sustained until today by the Bolivarian Republic of Venezuela. Last year, on October 17 and November 18, with the slogan of ‘where is Petrocaribe money?’, huge demonstrations were held across the country demanding president’s resignation, a thorough investigation into the embezzlement of Petrocaribe funds and judicial proceedings against all those responsible.

Earlier, in July, 2018, after days of protests against the massive increases in fuel prices announced by the government, Haitian prime minister Jacques Guy Lafontant resigned. But Moïse refused to step down despite pressure on him to do so, both from the people on the streets and within Congress.

Years of dictatorship, systematic corruption, political instability, vulnerability to natural disasters and harsh international sanctions have made Haiti one of the poorest countries of the Caribbean. Around 60% of the country’s population live below the poverty line and 24% in abject poverty. Despite the challenges, Haitians are determined to fight the misgovernance, neoliberal policies and discrimination which aggravate poverty and inequality in the country.