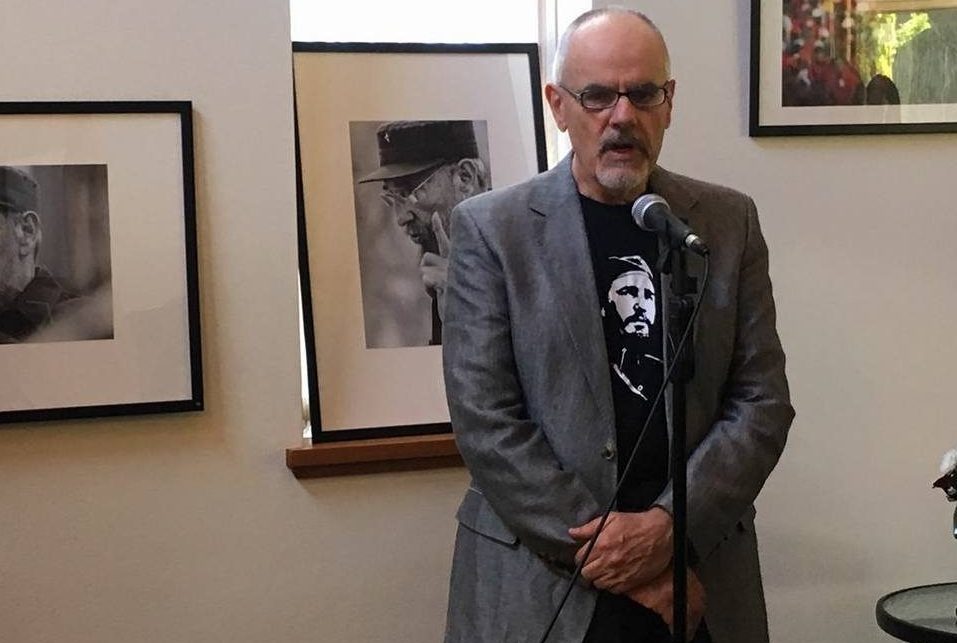 Tim Anderson has been targeted for his criticism of Israel's policies and the media narrative on the war on Syria,

A review committee of the University of Sydney upheld the termination of senior academic and activist Dr. Tim Anderson, on February 11, for alleged misconduct. His use of an Israeli flag with a barely legible Nazi swastika symbol etched on the Star of David in a post on Facebook criticizing the Israeli state for its apartheid policies was stated to be the reason for the dismissal. Anderson was previously suspended and later expelled from his post as a senior lecturer in December 2018 at the university’s department of political economy over the same allegations of misconduct by the provost and deputy vice-chancellor, Stephen Garton. He filed an appeal against his expulsion but the review committee voted 2-1 on Monday to uphold it. When contacted, the university management stated that the action against Anderson was for not meeting the “behavioral expectations” of the university, and called his actions “disrespectful and offensive”. Responding to the committee’s decision, Anderson, in a statement, called his dismissal “censorial abuse” and said that it “will send a cold chill through the University of Sydney”.

Anderson is a known proponent of anti-war and anti-imperialist causes in Australia. His opinions and works on such issues as North Korea, the conflicts in Syria and Yemen, and Palestine have .raised a great deal of controversy within the academic and activist circles of Australia. According to Dr. Anderson, his run-ins with the university administration and those he calls as part of the “Israel lobby” began in 2014, when he pro-actively campaigned against what he calls the “dirty war in Syria”. His writings and work have extensively covered the ongoing conflict in Syria, especially targeting the overwhelming narrative built up by mainstream media to push for a military intervention like the one in Libya. His works sought to debunk the unsubstantiated allegations of the Syrian government’s use of chemical weapons and also to highlight the atrocities wrecked by the rebels on Syria’s minorities. His works like The Dirty War on Syria, published in 2016, detailing several inconsistencies and problems in the narrative peddled by the media, academia and activists on the conflict, reportedly did not sit very well with his colleagues. The lecture slide over which the dismissal is based on. Credit: Tim Anderson

But the actual act of leveling charges against Anderson by the university administration, especially Garton, began in late 2017. Much of the allegations against him were over his posts and public opinions against Israeli atrocities on Palestinians. One of the posts that was raised to justify the dismissal was the graphic Anderson posted, enumerating the casualties of the Israeli attacks on Gaza, which he argued was not “even-handed.” The authorities claimed that the post was “anti-Semitic”.

This graphic, in which the ‘altered flag’ was used, was later also used as part of a lecture slide for one of his classes that he teaches called ‘Reading Controversies’. Anderson has stated that the flag is only to bring attention to the Israeli action against Palestinians as akin to fascism and has maintained that attempts to censor him over this is an infringement on his academic freedom. Talking to Peoples Dispatch, he stated that the “university managers have been lobbied – we could say goaded, and even ‘wedged’ – by Israel lobbyists”. When asked if he perceived his targeting as personal, he denied that and added, “They attack me for my writing on the dirty war against Syria, and for my criticisms of apartheid Israel there is nothing particularly personal about it. The reason universities react to these pressures is that they are corporatized and sensitive to outside funding bodies, and to the media attacks which affect their reputation and bankability.”

According to statement Anderson released, his dismissal is also in contravention of the university’s principles of protecting academic freedom and preventing any intervention from the management unless there are “harassment, vilification or intimidation”, or serious abuse. The report of the review committee, made public by Anderson himself, shows a majority opinion upheld the dismissal based on the argument that the use of altered image “does not serve an articulated academic purpose”, speaking very little about how his actions have been abusive. Interestingly, the minority opinion of the committee criticized Garton for using vague criteria, such as ‘offensive’ and ‘inappropriate’ against him.

Tim Anderson is currently consulting his union, the National Tertiary Education Union (NTEU), and is considering a legal action against the university.