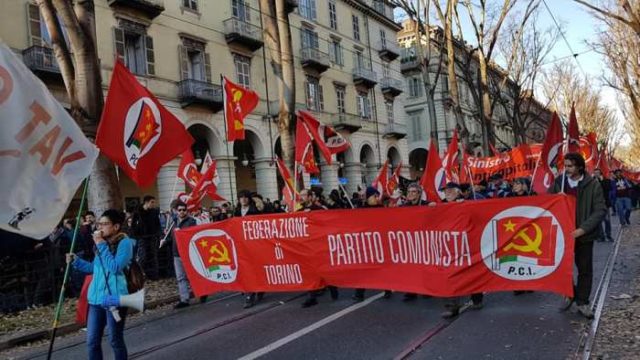 Italy is going through an unprecedented period of right-wing surge and hyper nationalist political charades. The populist government in the country, partnered by right-wing hyper nationalists, are in a vicious campaign to demonize the immigrant communities in the country. They have also passed a legislation which imposes stricter regulations on immigrants in order to restrict the flow of migrants and refugees in the country. Italy also restricted rescue ships in the Mediterranean from disembarking refugees at Italian ports. Peoples Dispatch spoke to Francesco Valerio della Croce from the Italian Communist Party (PCI) regarding the plight of the common people in the country under the rule of right-wing populists, and the interventions of the party against the anti-people policies of the government. Francesco Valerio della Croce is a member of the national secretariat of PCI.

Peoples Dispatch (PD): What is PCI’s take on the immigrant law proposed by the deputy prime minister, Matteo Salvini, which was ratified by the Italian parliament? Is there any resistance to that legislation from the grass roots in the country? What are the interventions of the PCI in this front?

Francesco Valerio della Croce (FC): We believe that Matteo Salvini’s policy is a racist one and that it provokes a conflict between working class sections. These racist policies feed the perception of an immigration “emergency” in the country. The responsibility of this crisis can also be attributed to the previous government, led by Partito Democratico (PD). Salvini’s law has the purpose of creating chaos and, by polarizing the society along racist lines, the law is intended to obtain electoral dividends. The law denies rights to thousands of immigrants in the country. PCI demands, first of all, respect for the sovereignty of African countries, with whom the others must (as China does) also engage with a policy of cooperation, instead of domination. Communists in Italy demand that the immigrants’ reception from the war-torn countries of North Africa be guaranteed and managed by the State. We must work together towards a united front of all workers to fight for equal rights against a common enemy, which is the crony capitalist exploitation.

PD: What are the responses from the different sectors of Italian society, including the students, workers, youth, women, minorities, etc., regarding the various policy initiatives of the current government in the country? What are the major interventions by the party in mobilizing these sectors?

FC: Italian people voted for the so called “populist” parties that lead this government to break up with traditional parties and their policies, and impoverished millions of people. Today there are strong mobilizations – also from students’ unions – against racism and neofascism, which are the legitimate components of the present government, led by Giuseppe Conte. In the autumn of 2018, we organized various demonstrations, asking for a real change, nationalizations and policies that are truly in favor of the people. Today, the policies of this government prove themselves to be subservient to the European Union, and the government seems capable of raising their voice only against the immigrants. In effect, the government is tough against the weaker sections and soft with the elites in Italy. Soon, we will see the disastrous effects of its economic policies, and the consent for populists will begin to decrease. In such a time, the communists must pursue a policy of radical alternative and true change.

PD: How do you view the rise of the ultra-right wing, hyper nationalist forces in Europe, and Italy in particular? A coalition of the populist Five Star Movement and the right-wing party ‘League’, led by Matteo Salvini, is ruling Italy these days. Neo-fascists like Casapound have been organizing hyper nationalist rallies in Italian cities like Trieste, etc. What are the reasons behind this surge and how are you planning to tackle this threat?

FC: The crisis of capitalism has already destroyed the future of generations in the country. EU’s liberal policies – applied both by leftist and right-wing governments – impoverished millions of people. The right-wing forces were successful in provoking fear against immigrants among a significant section of people in the country. We must tell the people about their real enemies, which are the managerial classes of our country, including right-wing parties like League, who crippled our country and all our people.

PD: What is your position on the European Union and how do you view EU’s support to the imperialist coup in Venezuela?

FC: EU is an imperialist and unreformable pole from which Italy must get out. EU’s founding treaties led us to today’s disaster, and they’re incompatible with our constitution. Italy must reaffirm its sovereignty in order to formulate pro-people policies. It is also necessary to reaffirm the centrality of State in the economic field. We must build a Europe marked by cooperation and solidarity between states and people, and we must fight for a foreign policy of cooperation with great economic powers like China. We’re not surprised by EU’s position regarding Venezuela. We condemn the foreign interference in Venezuela’s home affairs and we stand with President Maduro. EU is an imperialist pole, and it will support only its own kind after all.

PD: Various communist groups in Italy recently celebrated the hundredth anniversary of the founding of the Italian Communist Party (PCI). The PCI was a major force of the working class in the country for most of the 20th century. But now, the movement has been reduced to a few groups in the country, and the so called ‘leftist’ social democrats also stand in peril. In this period of neo-liberal onslaughts and neo-fascist surge, is it high time for the communist groups in the country to be united in order to reconfigure the Italian left for the emancipation of the working class?

FC: The division between communist forces in Italy is harmful and even ridiculous. We must work towards their reunification. A true unity can not be built without a political and ideological affinity to political culture, to our history, to the form of organization and to the analysis of this phase of world politics. PCI was born from the reunification of some of the existing communist organizations. In these years, we collaborated closely with other communist organizations, like Rete dei Comunisti, Patria Socialista and others, that have fundamental elements in common with our party, about general analysis as well as the other topics that I have mentioned.

I believe that these forces can, and must, converge as a single unit for party work and joint struggles. A very interesting and innovative experience is represented by the recently born digital portal, called the “Berlinguer Platform”. It is a very useful and innovative tool to encourage the participation of the militants, and the continuous exchange of information, a vital tool for a “collective intellectual” in the 21st century. Communists need a trade-union politic that is conflictual and close to the popular classes, and that has been missing for a really long time. In order to identify, and fight the enemies of our people, we must build a unitary political front between left forces. Unity is valuable only when you clearly know who to fight, and for which alternative you work with the people and for the people. Unity without these notions is not enough.