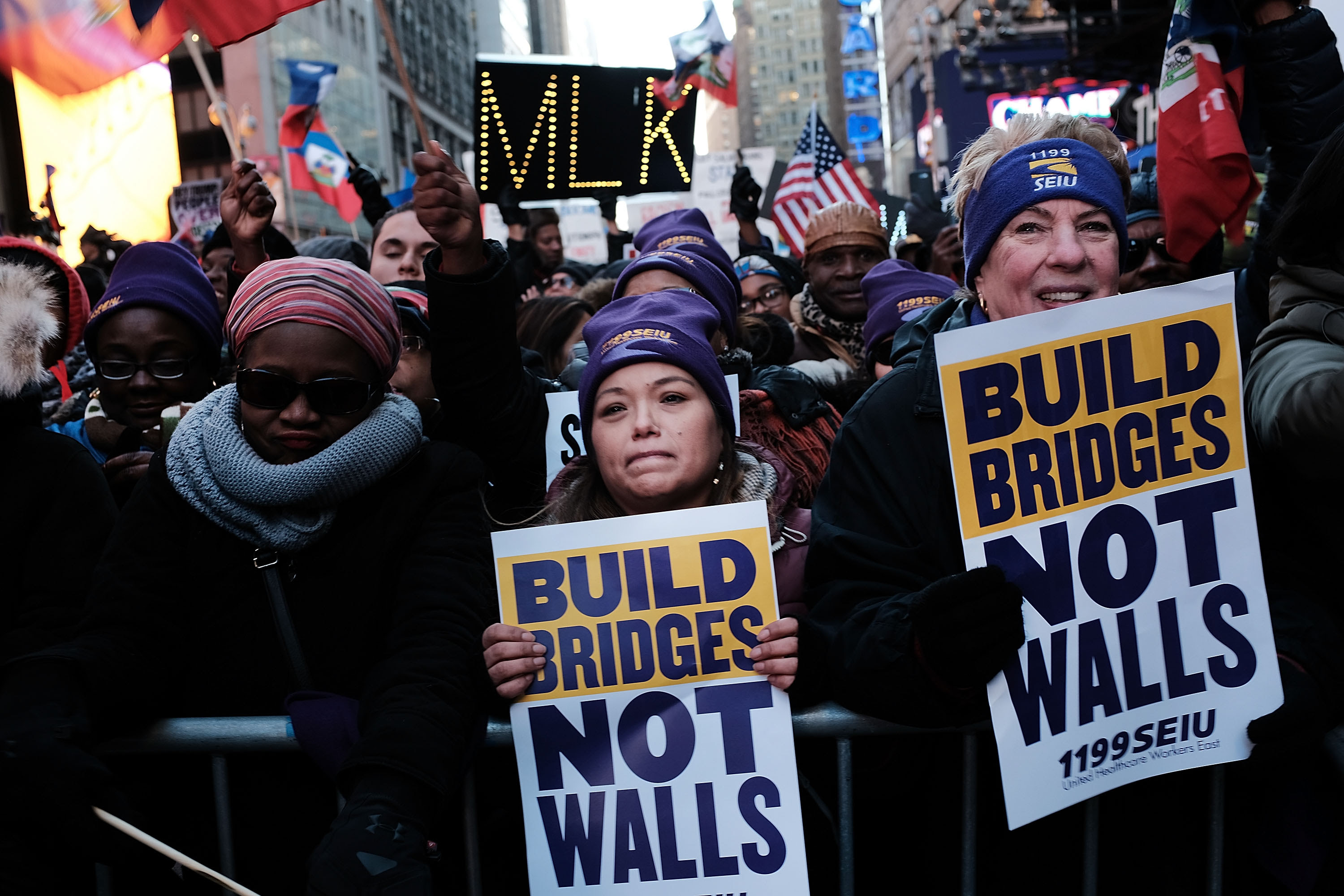 Donald Trump’s ascent to presidency in the USA on January 20, 2017 was marked by a significant polarization of the US civil society. On one hand, there was a surge in hate crimes, triggered by racism, anti-immigrant feelings and Islamophobia. Many noted that the white nationalists have a free-run in the country. On the other hand, left-liberals and progressive sectors, including women’s rights groups, LGBTQ groups, trade unions, civil rights movements and human rights organizations, are trying hard to resist the consolidation of the right-wing in the country. Trump proceeded with US unilateralism by backtracking on significant international accords. He has also been instrumental in reasserting US hegemony over Latin America. Peoples Dispatch spoke to comrade John Bachtell, chairman of the Communist Party of the United States of America (CPUSA), regarding the current political and social affairs in the country.

Peoples Dispatch (PD): What is your take on Donald Trump’s alarming gesture of declaring  a national emergency in the country?

John Bachtell (JB): Trump declared a National Emergency for the purpose of by-passing Congress, which refused to fund a border wall with Mexico. The declaration was made on the basis of a phony non-existent threat. Genuine emergencies do exist. The epidemic of gun violence is a national emergency. The epidemic of deaths from the opioid crisis is a national emergency. The climate crisis is a global emergency. This phony declaration is a desperate attempt by Trump to shore up his base, distract and divide the American people, and whip up fear after he and the Republican Party suffered humiliating defeats in the 2018 elections, in the aftermath of the government shutdown to fund the wall. However, this declaration also sets a dangerous precedent. It is yet another breach of democracy, and constitutional and democratic norms, by Trump and the cabal of extremists and fascists in his administration. The declaration erodes the constitutional checks and balances by undermining the role of Congress to legislate and spend money. It represents an abuse of power and another step in the direction of authoritarian rule.

PD:  Can you make a brief assessment of the impact of US shutdown on the working class in the country?

JB: The economic impact of the 35-day government shutdown the longest ever, was felt deeply by the 800,000 federal government workers and contractors, and by millions who depend on the vital services provided by the government. Many workers went without two consecutive paychecks, and were forced to borrow money, go to food banks and miss days of work as they couldn’t afford to pay for transportation. Many subcontractors, including many low paid workers, will not be paid for the time lost at all. And small businesses, restaurants and services that rely on federal workers as customers were severely affected, as were their workers.

The shutdown was instigated by Trump’s effort to force Congress to fund his wall at the border with Mexico, a proposal that a majority of the American people never embraced and the Democratic Party elected officials remained united against. The federal workers, especially air traffic controllers, transportation safety agents, internal revenue agents, etc., played a crucial role in ending the shutdown when a growing number of people quit reporting for work, which was an unprecedented collective action.

Millions of people might have been permanently affected by the temporary loss of federal housing subsidies during the shutdown because many landlords were threatening to pull out of the program. Many farmers, who rely on government loans to buy the necessary seeds and equipments for spring planting, were also hurt.

Overall, the US economy lost USD 11 billion. Trump’s threat to shutdown the government again will ripple throughout the economy, especially impacting businesses and consumer confidence.

The end of the shutdown was a massive defeat for Trump and the Republican Party, who gained no concessions from the Democrats. Trump’s popularity has hit a new low and is experiencing an erosion of support among parts of his base. It was a big blow to white supremacy, anti-Mexican and anti-immigrant hysteria, and everything “the wall” represents. It was also a huge victory for democracy, which was threatened by the idea that the President could just shut down the government on any issue to get his way. The victory was a defense of the role of government, the workers and their unions, and a united Democratic Party.

PD: What is your take on the strike action taken by teachers’ unions in various states to resolve their long-standing grievances, as seen in Los Angeles, Denver, etc. What are the major interventions by the party on this front? What proposals does it have regarding policy making in public education?

JB: The strike wave among teachers and educators is unprecedented. It has been building for many years, and it reflects the consequences of a two-pronged attack by the government and the growing militancy of educators.

Firstly, the austerity policies of the government at various levels have led to the steady defunding of public education, especially in states that are dominated by the Republican Party. A vital element of this strategy has been the demonization of teachers and their unions, which are a powerful force among public workers, the backbone of the Democratic Party and an obstacle to right-wing Republican policies. These attacks have led to decertification of public sector unions and right-wing Republican domination in many states.

The second factor is the effort to privatize public education, which has been pushed by hedge funds on Wall Street, and is supported by the Republican Party as well as significant sections of the Democratic Party.

But the wave of teachers’ strikes, which actually began in Chicago in 2012 and is broadly supported by parents and the public, has completely changed the situation. It is no longer possible for politicians to demonize teachers. Teachers and educators are among the thousands of grassroots activists who are now running for public office and transforming legislative bodies. Funding for education and slowing down or stopping the privatization process is becoming the main narrative.

PD: What are your observations regarding the radical mobilizations taking place in the country which reactivate the political cleavages in the society?

(The movements include civil rights movements, #Black lives matter, #WomensMarch, #Won’t Be Erased campaign by LGBT groups, mobilizations by the progressive and liberal sectors on one end, and white supremacist, anti-immigrant, Islamophobic, anti-semitic and homophobic mobilizations on the other end.)

JB: The historic upsurge in activism, which has been dubbed as “The Resistance”, reflects an overall shift towards the left in public opinion in the US. This development comes in response to a number of factors, including the crisis of wealth extremes, the increase in social inequality, growing household and student debt crisis, the climate crisis, the deterioration of infrastructure and the related 40-year growth of the extreme right-wing as well as the implementation of many of its policies.

Most of these movements were already present before the 2016 election and grew out of the political space opened up by the Obama administration, the growth of the left in response to the 2007 financial and economic crisis as well as the long term fight against the extreme right. By 2010, 55% of Democrats already had a more positive attitude toward socialism and a growing negative attitude toward capitalism.

But the election of Trump changed everything. What emerged was a massive resistance movement led by women, especially women of color, allied with the Democratic Party, that was alarmed by Trump’s open embrace of white supremacists and fascists. This movement was an uprising to defend democracy, constitutional and voting rights, and to block the Trump agenda, especially the misogyny, racism and anti-immigrant hate. This movement was victorious in the 2018 midterm elections with a resounding victory that restored a Democratic majority to the House of Representatives and to many state legislatures and governorships.

The victory showed that Trump and the Republicans are losing support among some voters who had supported them in 2016, who had fallen prey to appeals to racism, misogyny, xenophobia, Islamophobia, homophobia, anti-Semitism, anti-science attitudes, and efforts to blame people of color and immigrants for the growing crisis. This was primarily the case among voters in suburban areas, including white working-class and women voters, who are increasingly rejecting Trump and Republican extremism, and in some mid-western states which had gone with Trump in 2016.

The victories open the possibility for a much broader multi-racial movement that rejects the Trump agenda, that can oust Trump from the presidency and the Republican Party Senate majority in the 2020 presidential elections.

PD: The president himself appears to be a major polarizing figure in the US society these days. Do you sense an opportunity here to form a real opposition in the country by uniting the working class, and other sectors in the society, and rupturing the Democrat/Republican binary?

JB: In response to Trump’s efforts to divide the people along class, racial and national lines, the broad anti-extreme right political alliance has grown to a new level of unity, power and influence. This movement is multi-racial and multi-class, including a section of big capital, and embraces the organized labor movements, large parts of our multi-racial working class, communities of color, women and many other mass democratic organizations and movements, including those for racial and gender equity, immigrant rights, environmental justice, etc. There is also a significant and growing left popularity and, in general, a growth of anti-corporate sentiments.

Once the extreme right domination of the political life of the country and the government is broken, and left-center governments are elected on a federal, state and local level, a new political terrain will come into being. At this point, the country will enter a new phase of struggle and the door will be open for mass movements to advance towards a more radical agenda. This will include building political independence from both Democratic and Republican party corporate domination, and the creation of an independent working-class-led people’s political party which challenges the prerogatives of capital. But the extreme right, with its ability to influence millions of voters, will be part of our political scene for years to come and unity will be needed to prevent their return to power.