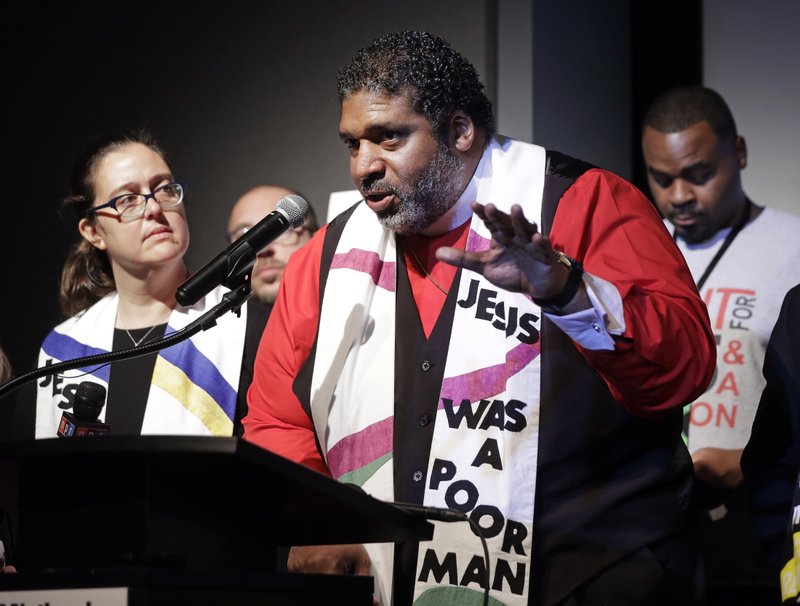 Rev. Theoharis called out president Trump for diverting funds on the border wall, instead of tackling the real emergencies like racism and poverty.

On February 25, the US based activist group, Poor People’s Campaign: A National Call for a Moral Revival, announced their plan for a nationwide National Emergency Truth & Poverty Bus Tour, aimed at highlighting the true emergencies afflicting the nation’s 140 million poor and low-income people in the US. The plan was announced by Revs. Dr. William Barber II and Dr. Liz Theoharis, co-chairs of the Poor People’s Campaign, at a press conference in Washington DC. They also announced the plan to hold a People’s Moral Action Congress in Washington in June, with more than 2,000 participants, to discuss the realities of poverty.

People’s World reported that the tour will be launched later in March, and continue in April, and will hit about 28 states. The tour comes in response to US president Donald Trump’s declaration of a state of emergency along the southern border on February 15,  in an attempt to divert USD 8 billion worth of funding away from other government projects and toward his border wall proposal.

Rev. Theoharis said that “instead of tackling the real emergencies of systemic racism, poverty, militarism and ecological devastation, the president is diverting funds to build a monument to white supremacy at our southern border”.

“Right now, there are 140 million people who are poor or living paycheck to paycheck, just one emergency away from poverty. 62 million people are making less than a living wage and 14 million families cannot afford water,” he added.

Campaign co-chair, William Barber, told SFGATE that the debate between the Democrats and the Republicans revolves around the wall, and pointed out that “nobody has sat down and said: ‘Here are the real emergencies and here is how these resources could be used’”.

Poor People’s Campaign: A National Call for a Moral Revival is an American anti-poverty campaign which demands federal and state living-wage laws, equity in education, an end to mass incarceration, a single-payer healthcare system, the protection of the right to vote, etc. The campaign takes its name from the original 1968 Poor People’s Campaign, organized by Martin Luther King Jr. and the Southern Christian Leadership Conference as an initiative to gain economic justice for the poor people in US.

Meanwhile, on Tuesday, the US House of Representatives passed a resolution to halt Trump’s national emergency declaration at the US-Mexico border, in an attempt to block him from beginning construction of a border wall without approval from Congress. The motion was supported by 245 votes, including 13 by Republican members, and opposed by 182 votes. The resolution will now go to the Senate.

The Guardian reported that Trump has vowed to veto the measure if it reaches his desk.

Earlier, John Bachtell, chairman of the Communist Party of USA, told Peoples Dispatch that “Trump declared a National Emergency for the purpose of by-passing Congress, which refused to fund a border wall with Mexico. The declaration was made on the basis of a phony non-existent threat. Genuine emergencies do exist… of gun violence… the epidemic of deaths from the opioid crisis… the climate crisis…”

“This phony declaration is a desperate attempt by Trump to shore up his base, distract and divide the American people, and whip up fear after he and the Republican Party suffered humiliating defeats in the 2018 elections, in the aftermath of the government shutdown to fund the wall. However, this declaration also sets a dangerous precedent. It is yet another breach of democracy, and constitutional and democratic norms, by Trump and the cabal of extremists and fascists in his administration. The declaration erodes the constitutional checks and balances by undermining the role of Congress to legislate and spend money. It represents an abuse of power and another step in the direction of authoritarian rule,” he added.