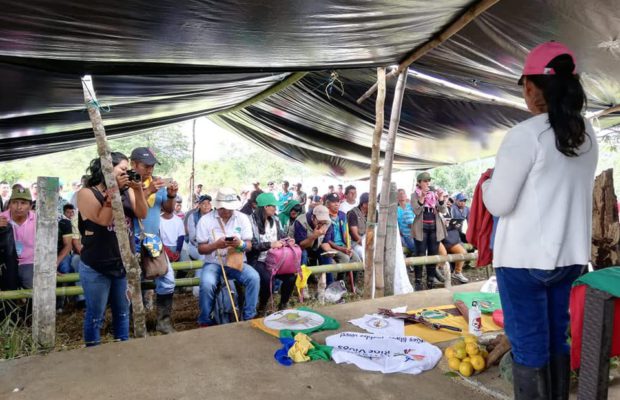 The Via Campesina mission met with a number of social leaders and organizations in Colombia.

La Vía Campesina’s (LVC) Third International Solidarity Mission to Colombia, which began on March 29, concluded on April 2 in Bogota with a call on the government to honor the peace agreements signed with the Revolutionary Armed Forces of Colombia (FARC). The mission was attended by over 20 peasant leaders from 15 countries and also joined by a delegation from the Social Movements of ALBA. The primary objective of the mission was to identify factors for the implementation of the agreements signed between the Colombian national government under former president Juan Manuel Santos and FARC, which is a legal political party now and is called the Common Alternative Revolutionary Force.

“We conclude that the implementation of the agreements for the construction of a Peace with Social Justice is of the utmost importance for the people of Colombia. There is grave concern among peasant organizations, indigenous peoples and black communities regarding the State’s non-compliance. Those with this concern are the main victims of the internal armed conflict in the country. The Peace Agreement has been almost entirely breached by the Colombian government, which we consider obligated to have and show the political will to implement the Agreement, something we did not observe to be the case neither in the territories nor in public policies,” said LVC in a statement released after the conclusion of the mission.

On March 10, Colombian president Iván Duque objected to 6 of the 159 articles of the Statutory Law of the Special Jurisdiction for Peace (JEP) putting the country’s peace process in jeopardy. The JEP is a transitional justice system established through the peace agreements. It establishes a court to investigate, judge and sentence those responsible for the crimes committed during 50 years of war between the national security forces and the guerrilla group. On March 18, thousands of people flooded the streets of the main cities of Colombia in rejection of the objections raised by the president and in support of the JEP.

On March 29, LVC delegates held a meeting with members of the Colombian Congress and expressed their solidarity with the Colombian people in their struggle for peace. In the afternoon, a meeting with representatives of different social organizations and movements was held, in which discussions were held around the preparations for the national civic strike scheduled for April 25 and the deteriorating situation of the crimes against peasant and social leaders.

“The mission raises a very important point, because the country is debating the National Development Plan and we want to see the government’s commitment to the implementation of the Peace Agreements, and how it sees the peasant, indigenous and black movements in this plan,” said Nury Martínez of the National Union Agricultural Association (FENSUAGRO) and political  coordinator of LVC in South America, highlighting the importance of holding the mission.

On March 30, field visits to the Cauca, Cundinamarca and Tolima departments of the country were organized. The participants met with representatives of different social, peasant, indigenous and afro-descendant organizations in Tolima and Cundinamarca, engaging in conversations around the problems faced by peasants and increasing criminalization of social protests, persecution and assassination of social leaders.

The delegates also visited Cauca to verify the situation of the Minga, set up by several different indigenous communities and peasant organizations of south-west Colombia, who have been mobilizing since March 10 in the Cajibío municipality of Cauca. Peasant and social leaders from Argentina, Bolivia, Brazil, España, Dominican Republic, Guatemala, Haiti, Nicaragua, Paraguay, Peru, South Africa and Venezuela expressed their overwhelming support to the peasants, who are seeking a meeting with president Duque to demand the compliance with agreements reached with previous governments, among other demands.

The mission also addressed the issue of the violation of human rights by the Colombian State, especially with regard to the repression of peaceful protests by the communities participating in the Minga.

On March 31, they met with the agrarian communities of the Sumapaz locality of Bogota. On April 1, a meeting was held with representatives of national authorities and global organizations present in Colombia such as the UN, FAO, UNDP and the European Union.

As an international guarantor to the point 1 of the peace agreements, related to the “Integral Rural Reform”, LVC condemned the possibility of it not being implemented as it is not part of the government’s National Development Plan. It denounced the fact that peasants continue to be disregarded as political legal subjects, even after the United Nations (UN) ‘Declaration on the Rights of Peasants and Other People Working in Rural Areas’, passed in 2018.

LVC also urged the Colombian government to reactive negotiations with the National Liberation Army (ELN) in order to achieve a stable and lasting peace, much needed by the people of Colombia.