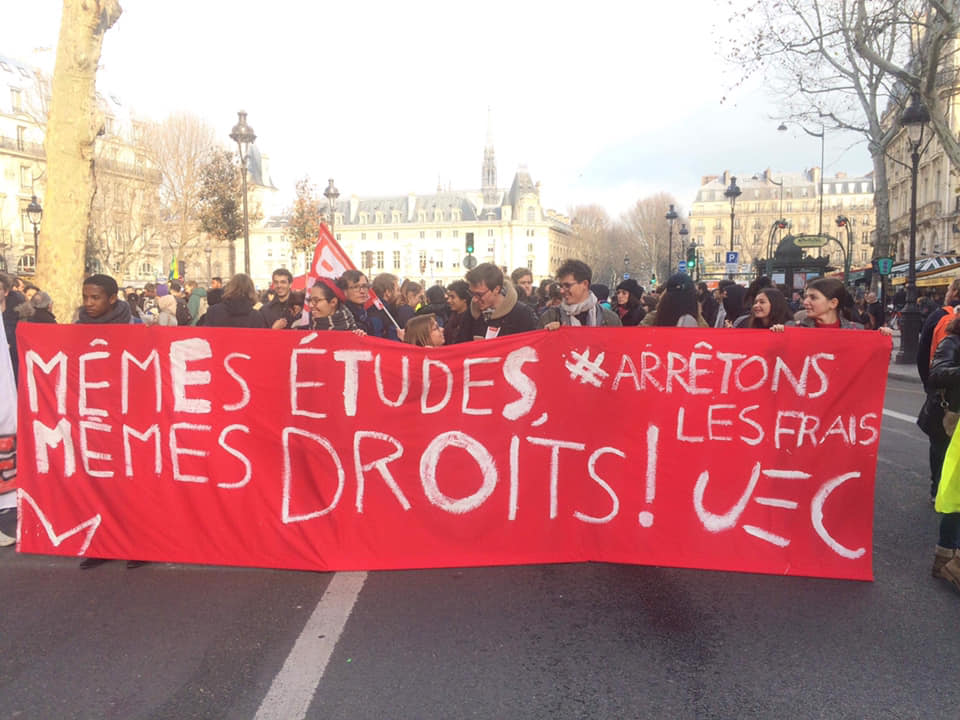 The Union of Communist Students has emerged as one of the major student bodies in France.

France has been witnessing a wave of massive protests in recent times, from the  populist Yellow Vests movement to the mobilizations by organized trade unions. For a majority of the people, living conditions have deteriorated due to the harsh neo-liberal policies of French president Emmanuel Macron. In response, along with the Yellow Vests and trade unions, the youth, especially the students of the country, have been in the forefront of the protests, demanding higher investment in the education sector, as well as free and universal education. Peoples Dispatch spoke to Anaïs Fley, national secretary of the Union of Communist Students (UEC), regarding the role played by student movements in the recent mobilizations across the country. UEC is one of the major student organizations in France, and has a presence in all key educational institutions in the country.

Anaïs Fley (AF): The reforms, called ‘Welcome to France’, would increase the registration fees for foreign students by over 17 times (from 170 euros to 2,770 euros) for a year of a Bachelors course and from 243 euros to 3,770 euros for a year of a Masters course or a PhD. It is a racist, xenophobic and elitist measure that aims at selecting students based on money. Moreover, France does not take into consideration that most foreign students come from the former French colonies. The direct consequence would be the decline of applicants to French universities, as shown by several official studies. At Paris VIII University, an 87% drop in applications by foreign candidates was noted. Also, students understand that this reform implies a general increase in registration fee for all students. The decline in the state budget and the refusal to charge companies has driven universities to bankruptcy.

The increase in registration fee is not the only obstacle to the arrival of foreign students in France. It is necessary to close Campus France, which is an institution of the ministry of foreign affairs and the ministry of higher education. Campus France organizes the financial and political selection of the foreign students. Furthermore, a student card should automatically allow for multiannual stay without any other conditions. The university must be free for all those who study here. Consequently, we ask for the investment of an additional 2 billion euros (USD 2.5 billion) per year in higher education and research, with a fair distribution between universities. We are not alone in this fight. 17 university presidents are against the reform. We also work with many foreign student associations, teachers’ unions and the school network of the French Communist Party.

PD: What were the major factors that contributed to the High School (Lycees) strike in December 2018?

AF: Students at more than 300 high schools went on strike, especially in small towns and rural areas. All these territories have been ignored by policy makers. The main demand was the withdrawal of ‘parcoursup’, an unfair platform that selects high school students according to social criteria. High school students demanded free access to university. Another demand was the removal of the proposal for a universal national service that looked more like disguised work and reflected a lack of educational ambition. The students organized themselves intelligently, especially around high school unions, including the Union Nationale Lycéenne (UNL), which was at the forefront. The communist youth (MJCF) was present to increase the ranks of the demonstrations. As everywhere else, the French youth has understood that diplomas are a protection in the capitalist jungle. Moreover, we want to study for the advancement of society, and to arm ourselves to transform the world. The capitalists resent the fact that more than 50% of the French youth enters higher education.

PD: What are the major implications of the policies of Emmanuel Macron on the educational sector in the country?

AF: “The bourgeoisie has played an eminently revolutionary role in history,” Marx and Engels said in the Manifesto of the Communist Party in 1848. Today, Emmanuel Macron tries to make us believe that the bourgeois is still revolutionary, whereas it is obvious that it prevents society from forming an association in which the free development of each is the condition of the free development of all. Let us take the example of ecology, where an investment in higher education and research would allow considerable progress. This is particularly applicable to the field of energy. For instance, Marxist and ecological course content could increase scientific knowledge and provide answers to the social and economic needs. On the contrary, president Macron decided to give the illusion of being revolutionary in order to capture the progressive electorate. He is ironic. In an interview, he himself recommends reading Marx, but without applying his revolutionary project, of course! He forgets that what matters is material change, not ideas. In the field of education, he says that lecture halls are overcrowded, but does not re-invest in education. While announcing that he wants to democratize access to universities, he introduces the selection system. He calls himself a feminist, but does not attack patriarchy. More concretely, the French president follows the policies of his predecessors. He follows the European Union’s policy of opening up universities to competition and liberalization.The consequence is the creation of a two-tier university: the university of the rich and the university of the poor. The intention is to prevent the working class youth from gaining leadership positions.

PD: What has been the contribution of student movements to the ongoing people’s protests in France?

AF: As two centuries of labor movement have taught us, in the face of the capitalists and their government, it is, first and foremost, the balance of power at the economic level that matters. By stopping work, wealth producers are drying up profits at the source. The fulfillment of students’ demands is therefore largely subordinated to the growing struggles in the field of work. Therefore, converging the struggles is good but not enough. In order to win, we have to articulate and prioritize the struggles. It is urgent.

The student movement is growing. Today, in Algeria, students are at the forefront of the coming revolution. In France, far from a space of privileged intellectuals cut off from society, universities have turned into spaces that are at the heart of economic change and potential emancipation, a place for the working class. The strategic advantage is that universities bring together thousands of students, unlike companies that are increasingly fractured by outsourcing and uberization. Last year, by thousands, in the General Assemblies, the students put forward simple and clear demands, including abolition of the ORE law (instituting the selection), a public reinvestment in higher education and, of course, new democratic freedoms and rights in universities. The reactionaries were obviously opposed to the social movement. The fascist attack, perpetrated in Montpellier, by an armed gang failed to discourage the students. On the contrary, it pushed many of them to engage in a broad and progressive democratic movement. The importance of student strength is illustrated by the presence of Lucie Martin, a remarkable comrade and leader of the UEC, in the communist list for the European elections.

PD: What are the general characteristics of the contemporary student movement and what are the major contributions of the UEC?

AF: The strength of the student movement is that it is mobilized in several struggles that come together, including the recognition of work, feminism, internationalism or even ecology. In Europe, tens of thousands of students demonstrate every Friday in the streets, alongside high school students, demanding a real ecological revolution. While the only response from governments to the ecological emergency is to ‘empower businesses and individuals’, the demands of the students are not without appeal: “Change the system, not the climate”, “Fuck profit, make some changes”, etc. The insight that ending capitalism is an emergency is clearer than ever. The student movement has changed a lot in the last decade. Some unions collapsed, while the Union of Communist Students gained power. We are now present on most campuses and, without a doubt, we are the primary student political organization. We propose a week of Marxist thought, a week of feminism, and so on. We have relations with elected communists. We believe that every student must be able to find a communist student at their side on whom he or she can count on. However, we cannot win alone. The student movement relies on associations, committees of struggle and student groups. Online social networks have become a new means of organization. They are insufficient, but allow very different students to connect, share information and get involved. The student movement, however, is still young. It lacks maturity and achievements. But French students can count on communists to work more speedily than the government and achieve social transformation.