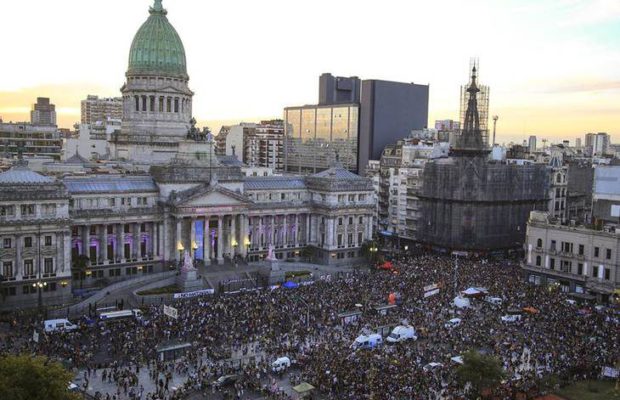 Massive protests have been going on since January, demanding the withdrawal of hikes to the rates of essential services.

On April 4, with the slogan of “Argentine unity, production and work”, thousands of citizens and members of several trade unions and social organizations gathered on the streets of Argentina. They were protesting the brutal economic policies of the right-wing government of the Cambiemos party, led by president Mauricio Macri. The protesters demanded that the government declare a food emergency and withdraw the unaffordable hikes in the price of public services (water, electricity, residential gas and transport). At least six protesters were injured when they were attacked by the police.

The Trade Union Front for the National Model (FSMN), an umbrella organization of several trade unions of Argentina, which are not a part of the CGT, announced a plenary on April 11 at the headquarters of SMATA, to call for a general strike at the end of April or in the beginning of May. On April 11, the CGT will present a document to the secretary of labor which describes the situation faced by industry, small and medium scale enterprises, and the condition of production and employment throughout the country.

“#4A Against the economic model, the #layoffs, the policy of hunger and misery imposed by Macri and his government against the #people. They give a tough time to people without shame, but they ask for forgiveness to #FMI #We marched before, we march today and we will always march #Truckers #TradeUnionFront” tweeted Pablo Moyano, general secretary of the Truckers Trade Union.

In Buenos Aires, mobilizations in rejection of adjustments, rampant inflation, mass dismissals, growing poverty, concentration of wealth and destruction of national industry were carried out at different locations. A group of protesters, mostly comprising trade unionists, gathered at the Miserere Plaza and marched towards the Obelisco, a historic monument. From there, they marched to Plaza de Mayo. A group of demonstrators mobilized by social organizations marched to the national congress and then, towards the ministry of social development.

Protesters gathered in front of the ministry of social development, seeking dialogue with the government officials to address the issues of hunger faced by the most precarious sectors of the society. However, they were attacked by the police. Over 6 were injured and wounded with pepper spray used by the police. In addition, social leader Lidia Ríos was attacked with tear gas and arrested when she tried to stop the police officials who were confiscating the belongings of the protesters. Fortunately, her lawyer and other members of her organization managed to free her.

In Cordoba, hundreds of people associated with the Cordovan Workers Movement hit the streets, demanding changes in the national economic policies. In a joint document, presented at the demonstration, the Cordovan trade union fiercely condemned Macri’s administration. “Today we complete 1,211 days of sustained degradation in the living conditions of Argentine men and women. Three years, three months and twenty-five days of suffering the anti-popular measures that revealed the lies with which Macri and his accomplices built the biggest electoral fraud of last 70 years,” read the document.

Since the beginning of this year, Argentines have been continuously mobilizing against the neoliberal policies imposed by Macri. On February 26, thousands of people across Argentina went on strike, demanding an increase in salary and calling for an energy emergency. Earlier, on February 13, hundreds of thousands hit the streets across the country, demanding the withdrawal of the increases. They also asked the government to declare a food emergency and release funds towards various social programs. In addition, during January and till the first week of February, under the banner of national plan of resistance to the tariffs, different kinds of protests were carried out throughout the country.